The Prime Minister insisted his predecessor was wrong as he expressed pride at the ‘leading’ role he is playing on the world stage.

Writing in yesterday’s Daily Mail, Mrs May suggested Mr Johnson has failed to honour British values by threatening to break international law in Brexit trade talks and tearing up the foreign aid target.

At Prime Minister’s Questions, Mr Johnson was interrogated by MPs over the bombshell article that had become the talk of Westminster. 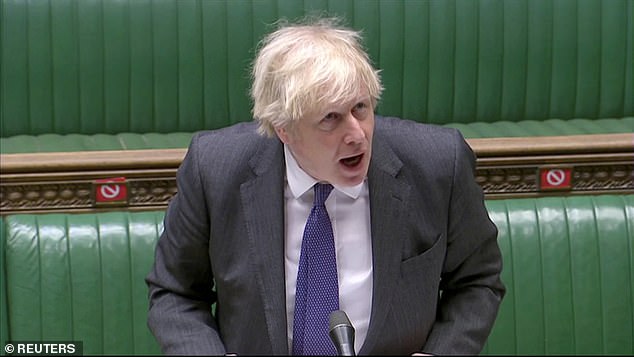 But the PM firmly rejected the criticism, telling the Commons that ‘when it comes to global leadership on the world stage, this country is embarking on a quite phenomenal year’.

He said: ‘We have the G7 and Cop26, and we have already led the world with the Gavi summit for global vaccination, raising $8.8billion (£6.5billion).’

Britain is ‘working to promote global free trade, and of course we will work with President Biden to secure the transatlantic alliance and Nato’, he added.

At a briefing afterwards, the PM’s spokesman said he rejected Mrs May’s characterisation of his leadership.

Asked if Mr Johnson’s government is still providing moral leadership, the spokesman replied: ‘Yes… we continue to spend substantial amounts of money on aid to support international development, and we will continue to do so this year despite the temporary cuts to the aid budget.

‘We continue to provide more aid spending than almost any country in the world.’

The spokesman dodged questions about whether Mr Johnson welcomed the advice from his predecessor and declined to say when the pair last spoke. 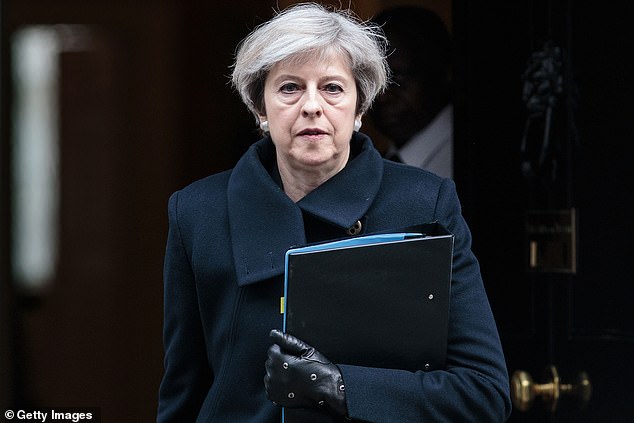 In her Mail article, to mark Joe Biden’s inauguration yesterday as US President, Mrs May said it represented a ‘golden opportunity’ for Britain, with the return of a more normal style of presidency.

‘Strong leadership knows when to compromise to achieve a greater good,’ she said. ‘We must reject a scene in which a few strongmen face off against each other and instead bring people together in a common cause.’

Theresa May is not the first Conservative leader to feel keenly the pain of being ousted from power, an agony made all the more bitter when the ousting is done not by the voters but by fellow Tories.

After he was ignominiously toppled by Margaret Thatcher in 1975, a truculent Sir Edward Heath was nicknamed The Incredible Sulk. By 1990, it was the Iron Lady’s turn to be called a ‘backseat driver’ when she could not stop meddling in her successor John Major’s administration.

Since Mr Johnson ruthlessly removed her from Downing Street 18 months ago, Mrs May has taken one or two pot shots at him in Parliament. Yesterday, she delivered a full-scale broadside against her successor in an article for the Daily Mail.

Her florid attack, in which she accused a serving Prime Minister of ‘abandoning [Britain’s] position of global moral leadership’, dominated the airwaves yesterday and led to questions in Parliament. 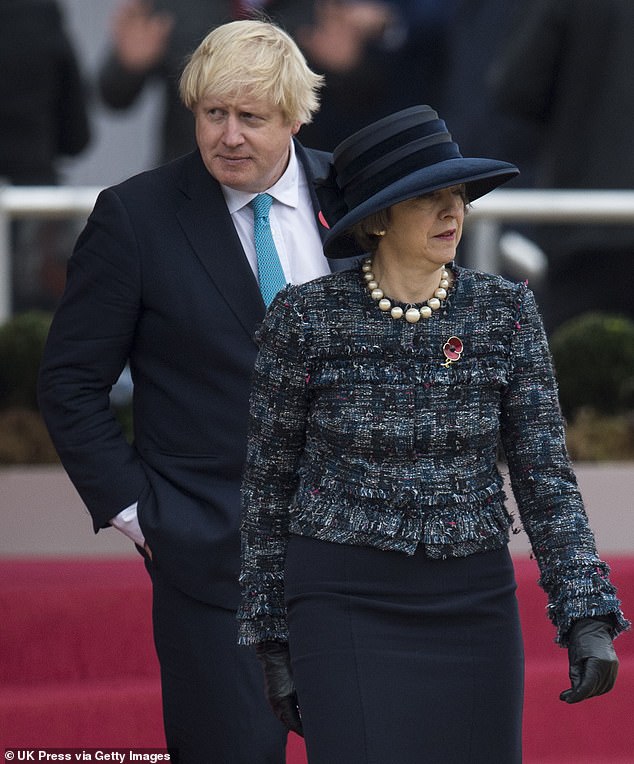 Yesterday, Theresa May (right) delivered a full-scale broadside against her successor Boris Johnson (left) in an article for the Daily Mail

Her critique took aim at the ‘moral’ nature of Mr Johnson’s policies. This was no coincidence. In 2018, Boris dramatically resigned from her government following a Cabinet Brexit summit at Chequers, the Prime Minister’s country retreat.

Withdrawing his support was bad enough, but Boris went on to treat Mrs May with contempt. He told the then-prime minister to her face that trying to sell her Brexit deal to voters would be like ‘polishing a turd’, a vulgar remark that his apparatchiks gleefully leaked.

Two months later, Boris followed this with a devastating speech in the Commons.

He called the Brexit deal that Mrs May had spent two long years negotiating a ‘moral and intellectual humiliation’. Her aides were outraged.

‘The damned cheek of it!’ one said to me. ‘Him, of all people, lecturing her on morals.’

Not even Boris’s staunchest defenders would try to claim that morality has always been his driving force, what with his extra-marital lovers and children by a number of women.

Such a lifestyle, of course, is nothing like Mrs May’s. She has remained utterly devoted to her husband Philip since they met as students 45 years ago.

In her Mail article yesterday, Mrs May did not stop at questioning her successor’s political morals.

‘For too long,’ she wrote, ‘we have been sliding towards absolutism in international affairs: if you are not 100 per cent for me then you must be 100 per cent against me… Strong leadership knows when to compromise.’

This, of course, was an explicit dig at Donald Trump – but there is no doubt that Johnson was in her sights, too. But why now? What triggered Mrs May to sour relations so publicly this week? There were signs that trouble lay between the two political heavyweights two months ago, when Mrs May rose to speak in a Commons debate on Covid. 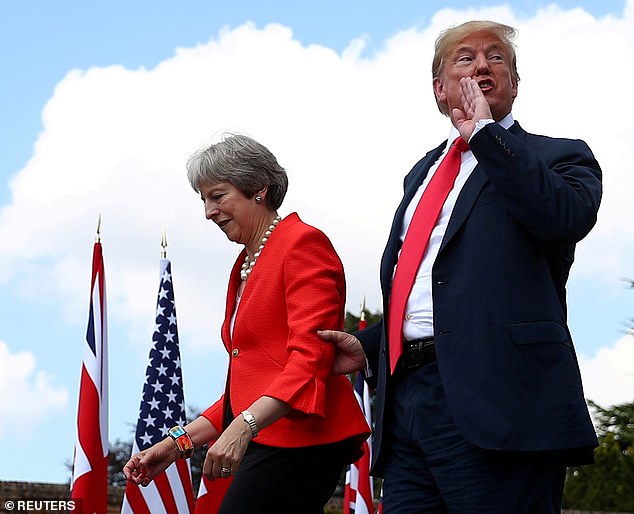 Referring to the violent handover between Trump and Mr Biden this week, Theresa May (pictured with Donald Trump in 2018) wrote: ‘I know from experience that leaving power is not easy’

Before she had completed her first sentence, the Prime Minister, sitting just a few feet away, walked out, in a flagrant breach of Parliamentary etiquette.

Mrs May was momentarily silenced and grimaced awkwardly, but then castigated Mr Johnson’s handling of the pandemic, accusing him of ‘picking data to suit his policy’.

But though the seeds were sown long ago, I believe that it was the tumultuous events across the Atlantic that finally prompted Mrs May into making her comments against the PM in yesterday’s Mail.

Referring to the violent handover between Trump and Mr Biden this week, she wrote: ‘I know from experience that leaving power is not easy.’

Quite so: we all remember how, at a farewell press conference during the closing moments of her premiership, Mrs May wept outside No 10’s black door.

The truth, however, is that bad blood between May and Johnson has long been festering.

As far back as summer 2016, when they were both grappling for the Conservative leadership, Mrs May mocked Boris for having bungled the handling of London riots when he was the capital’s mayor five years earlier.

‘The last time Boris negotiated in Europe,’ she remarked, ‘he did a deal with the Germans and came back with three nearly-new water cannon.’

After Mr Johnson was crushed in that leadership contest, his ambitions seemingly destroyed for ever, she kept her enemy close by giving him the consolation prize of foreign secretary. But she also made it clear who was boss.

Four months after she became Prime Minister I nearly fell off my seat at an awards ceremony when she humiliated Mr Johnson, who was in the audience.

She seized on a remark he had made earlier at the event, comparing himself to an alsatian said to have been strangled by former deputy prime minister Michael Heseltine. Looking at her foreign secretary, Mrs May quipped: ‘Boris, the dog was put down… when its master decided it wasn’t needed any more.’

Mrs May still has a reputation for being a rather timid vicar’s daughter. In fact, she knows how to wield a stiletto.

She once donned a high-visibility jacket and hard hat purely to mock former chancellor George Osborne, and on another occasion joked that she ‘retched’ when David Cameron had handed a knighthood to his former communications chief.

Though her feud with Boris does not yet run as deep as the enmity between Heath and Thatcher, there are some striking similarities. Heath loathed Mrs Thatcher, who had served as his education secretary, largely because she dumped him so unceremoniously after seizing the leadership.

But their personal relations were always icy, and pro-European Heath despised her hostility to Brussels. He was a Conservative moderate who believed in ruling by consensus, though all attempts to do so failed.

After years of drift, his party threw him out in favour of a charismatic Right-wing risk-taker who never shied from confrontation –and who went on to win a landslide election and make history.

In the end, it was not until 1999, 24 years after Mrs Thatcher wrested the Tory leadership from Heath, that the pair finally buried the hatchet at a London banquet to honour the 20th anniversary of her first election win.

If it takes as long for Mrs May and Mr Johnson to kiss and make up, they will not break bread until 2043.

In the interests of the country, both should swallow their pride and do it now.