London: Britain's Prime Minister Boris Johnson said that it was inevitable that the country would see a second wave of coronavirus and that while he did not want a second national lockdown, the government may need to introduce new restrictions.

Britain was reported to be considering whether to impose a new lockdown across the country, after new COVID-19 cases almost doubled to 6000 per day, hospital admissions rose and infection rates soared across parts of northern England and London. 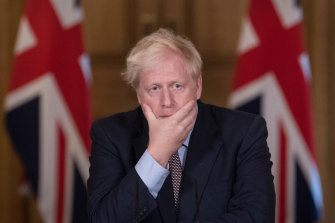 British Prime Minister Boris Johnson said it was “inevitable” that the UK would experience a second wave of COVID-19.Credit:Getty Images

That rise in cases was part of a second wave that was now unstoppable, the Prime Minister said.

"We are now seeing a second wave coming in … It is absolutely, I'm afraid, inevitable, that we will see it in this country," he said.

The sharp rise in the number of cases in the country meant that the government needed to keep everything under review and he did not rule out further measures being introduced.

Asked about whether the whole of the country should brace for a new lockdown, rather than just local restrictions, he said: "I don't want to get into a second national lockdown at all."

But he did not rule out further national restrictions being brought in.

"When you look at what is happening, you've got to wonder whether we need to go further than the rule of six that we brought in on Monday," he said, referring to the ban on gatherings of more than six people.

The United Kingdom has reported the fifth largest number of deaths from COVID-19 in the world, after the United States, Brazil, India and Mexico, according to data collected by Johns Hopkins University of Medicine.

The UK's official number of new positive cases shot up by nearly a thousand on Friday to 4322, the highest since May 8, after a separate ONS model pointed to about 6000 new cases a day in England in the week to September 10.

That was up from modelling of 3200 cases per day in the previous week, with the North West and London seen as hotspots.

Health Minister Matt Hancock called a second national lockdown a last resort earlier on Friday and when he was asked about it said: "I can't give you that answer now."

European nations from Denmark and Iceland in the north to Greece in the south have announced new restrictions to curb surging coronavirus infections in some of their largest cities.

Infections have climbed steadily across most of Europe over the last two months. Intensive care admissions and deaths have also begun to tick up, especially in Spain and France. 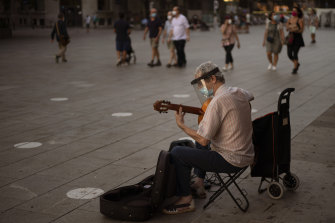 A musician wearing a face mask to prevent the spread of coronavirus plays guitar in downtown Barcelona.Credit:AP

In Spain, which has seen more cases than any other European country, the region including the Spanish capital Madrid will limit movement between and within areas badly affected by a new surge in infections, affecting more than 850,000 people.

Regional leader Isabel Diaz Ayuso said on Friday that access to parks and public areas would be restricted, and gatherings will be limited to six, but people would not be stopped from going to work in the country's hardest-hit region.

Authorities in the southern French city of Nice banned gatherings of more than 10 people in public spaces and restricted bar opening hours, following fresh curbs introduced earlier this week in Marseille and Bordeaux.

France on Thursday registered almost 10,600 new infections, its highest daily count since the start of the pandemic.

In Denmark, where the 454 new infections on Friday was close to a record of 473 in April, Prime Minister Mette Frederiksen said the limit on public gatherings would be lowered to 50 people from 100 and ordered bars and restaurants to close early.

Iceland ordered entertainment venues and pubs in the capital area to close for four days between September 18-21.

Dutch Prime Minister Mark Rutte said his government was preparing "regional" measures to combat the coronavirus outbreak after the Netherlands registered a record 1972 cases in the past 24 hours.

The measures will be detailed later on Friday and are expected to include tighter restrictions on public gatherings and earlier closing times for bars and restaurants. Hotspots include major cities Amsterdam, Rotterdam and The Hague.

In Greece, which emerged largely unscathed from the first wave of COVID-19 which hit Europe in March and April, Prime Minister Kyriakos Mitsotakis said the government was ready to tighten restrictions in the greater Athens area as cases accelerated.

Mitsotakis said Greece's committee of health experts had recommended extra curbs on public gatherings, the suspension of cultural events for 14 days and other measures which "could be decided today … and go into force on Monday."

Europe is still hoping not to follow the example of Israel, which entered a second nationwide lockdown on Friday at the onset of the Jewish high-holiday season, following a jump in new coronavirus cases.

India ordered its states not to hoard oxygen supplies and allow free movement amidst reports of shortages, as novel coronavirus infections hit 5.2 million on Friday, edging the country's tally closer to the United States, which is the worst-hit globally.

India, which recorded 96,424 new infections in the last 24 hours, has been posting the highest single-day caseload in the world since early August, according to a Reuters tally.

Oxygen supply has become scarce in some parts of India, government officials and experts said, putting critical healthcare at risk.

"Any impediment in the supplies of medical oxygen in the country may critically impact the management of patients suffering from COVID-19 disease," the federal home ministry said in a circular late on Friday.

"There shall be free movement of oxygen carrying vehicles into the cities, without any restriction of timings, while also enabling inter-city supply without restriction," it said.

Deaths in India have been relatively low, and it has a fatality rate of 1.62 per cent. On Friday, the health ministry said 1174 people died of COVID-19 in the last 24 hours, taking total deaths from the disease to 84,372.

Guatemalan President Alejandro Giammattei revealed on Friday that he had tested positive for the coronavirus, just as the Central American country was easing draconian travel restrictions imposed months ago to contain infections.

"The coronavirus test result was positive," Giammattei told a local radio station, adding that he had been tested six times during the pandemic. 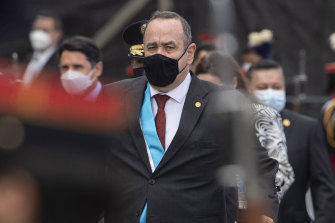 Three days ago, the 64-year-old President removed his face mask to deliver an Independence Day speech in Congress.

Guatemala opened its international airport to commercial flights for the first time since mid-March on Friday and also reopened its borders.

Giammattei did not say whether he was experiencing any symptoms related to the virus, but said he planned to address the nation about his health later on Friday.

Only a few other world leaders have had confirmed coronavirus cases, including Brazilian President Jair Bolsonaro and Boris Johnson. The President of neighbouring Honduras came down with the illness earlier in the pandemic.

Guatemala has registered 84,344 coronavirus infections so far and 3076 deaths.