The government’s total ban on watching top football clubs live has been mocked after a club welcomed fans to watch a match in their sports bar just metres from the pitch.

The Robins’ stadium has the largest indoor big screen in the country in its sports bar and pizzeria restaurant, situated in one corner of the 27,000-seater arena.

The Government’s controversial coronavirus guidelines state that a limited number of fans can watch the game and order food and drink at the indoor venue, but it is illegal to head through the doors to take a seat in the open air. 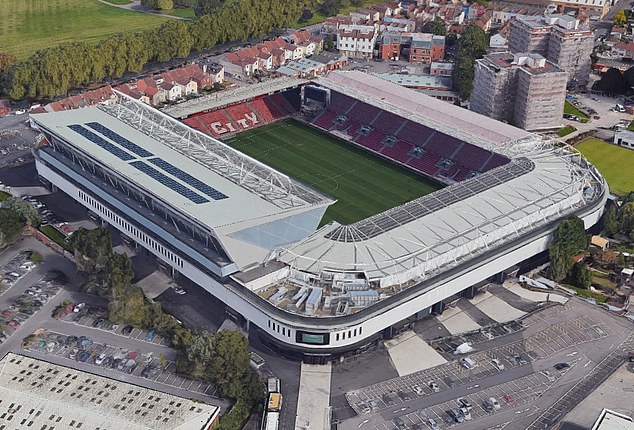 The bar, pictured on the corner in the foreground, is open to fans while  the rest of the ground is closed 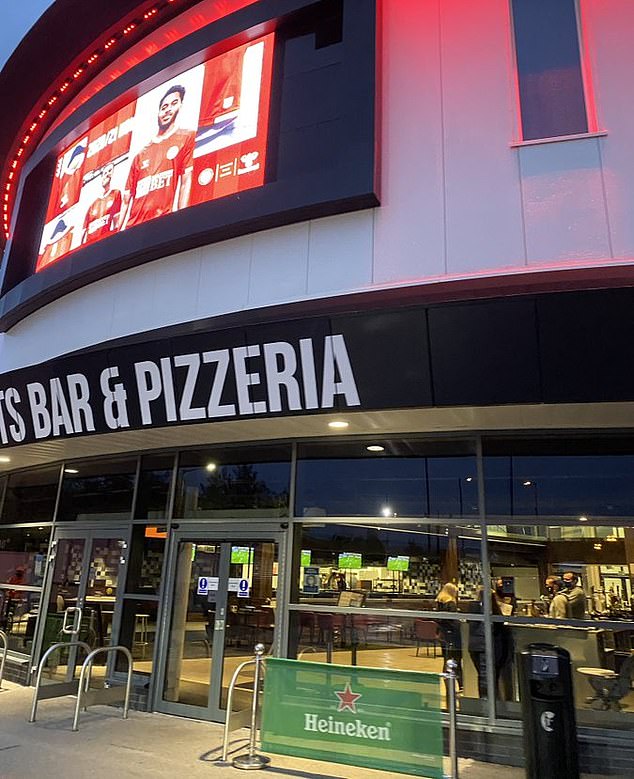 Sports journalist Michelle Owen noticed people inside the sports bar on her way to report on Bristol City’s game against Middlesbrough tonight.

‘The sports bar and pizzeria is open in Ashton Gate tonight where fans can watch, but just through the door is the actual game which they are not allowed to watch outside,’ she said.

Hundreds of people have reacted in amazement at paradoxical move with Bristol City, with Nigel Farage retweeting a picture taken by Ms Owen with the caption: ‘This is crazy’.

Rupert Bell replied saying: ‘It’s bonkers. they are worried about people shouting and singing. bet it’s going to go on inside there. we have people in charge staring at he headlights without a clue what to do.’ 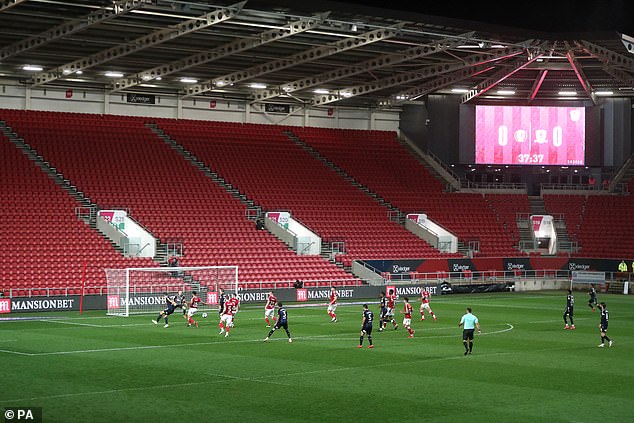 Bristol City’s game against Middlesbrough tonight was played behind closed doors in their 27,000-seater stadium, while fans watched on TV from an indoor bar just metres away

Chris Porch added: ‘It’s a ridiculous idea! Why you cant have at least 1000 in a ground social distensing is beyond me!’

Ahead of their fixtures against Middlesbrough and then Swansea City on Saturday, the stadium’s bosses announced the Sports Bar and Pizzeria will be open to watch the games on the big screen.

Mark Kelly, the boss of Ashton Gate Stadium added his name to a long list of other colleagues at Premier League and EFL clubs recently, calling for the Government to think again about the ban on fans watching football in a socially-distanced way inside stadiums.

In responding to photos of a packed London Palladium earlier this week, he said the contradictions that theatres and ballets and opera houses were allowed to have crowds back indoors, but football and rugby in the open air at Ashton Gate had to remain behind closed doors – were difficult to understand. 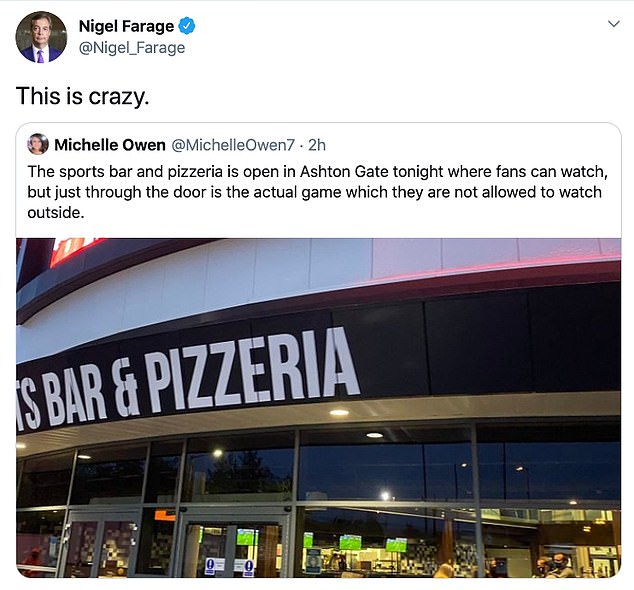 ‘It’s more about the massive and extraordinary contradictions at the moment,’ he tweeted.

‘The government just need to be humble enough to accept that an effective review needs to happen. We would (stadia) never do anything which would be a risk to people,’ he added.

Brentford FC have announced plans for a similar event, with tickets for a live screening of their match against Stoke City to be held in one of the stadium’s lounges on sale for £40.

‘While we continue to work with the UK Government on the safe return of our fans to home games, we’re pleased to confirm that (frozen) Season Ticket/Premium Seat Holders and their families will be able to join us at Brentford Community Stadium for a screening of our away game against Stoke City,’ the club said in a statement. 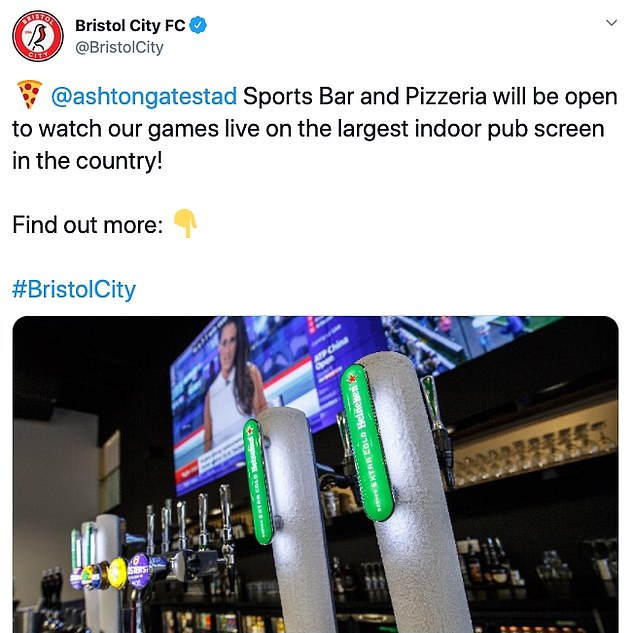 Ahead of their fixtures against Middlesbrough and then Swansea City on Saturday, the stadium’s bosses announced the Sports Bar and Pizzeria will be open to watch the games on the big screen

Currently, ‘elite’ clubs – which includes those in the Premier League and EFL pyramid and also the National League – must be played behind closed doors.

But club bosses outside of the top flight are worried that without expensive TV deals to fall back on they could face bankruptcy.

Ashton Gate stadium boss Mark Kelly said plans to have Covid-safe crowds of up to 8,000 socially-distanced fans were ready to go, but the government were not giving the go-ahead. 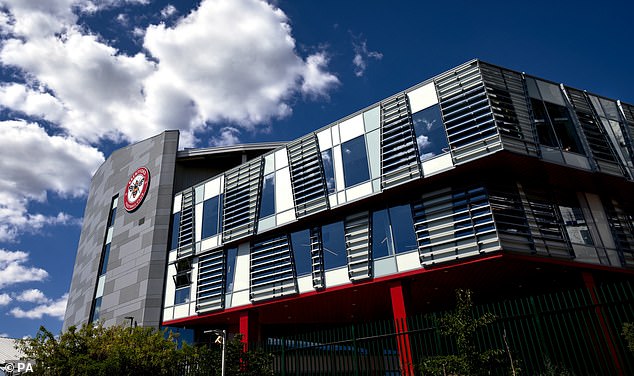 Brentford FC have announced plans for a similar event, with tickets for a live screening of their match against Stoke City to be held in one of the stadium’s lounges on sale for £40

‘We’ve a safe social distanced model ready to go to get 8,000 fans in and out of the stadium at phased times, and at no bigger risk than going to a bar,’ he confirmed.

‘I’ll keep saying this – we (stadia) are designed better than any cinema or bar to facilitate large crowds safely. I can have egress of 30,000 concert goers safely in 13 minutes on a normal day.

‘With absolute confidence we can (under the current guidelines) facilitate 9,000 fans safely NOW!’ he added.