Daily Covid cases in the UK continued to fall again today as another 80,930 Britons tested positive — but hospital admissions and deaths continue to steadily increase.

Today’s case figure marks a 14.5 per cent drop compared to the tally last week in a growing sign that Britain could be past its latest peak. It comes after there was a 5 per cent fall in cases over the weekend.

However, deaths have continued to rise with 303 reported today, a rise of 21.2 per cent on last week. The number of infected people admitted to hospital is also on the up with 2,150 recorded on March 25 — the latest day UK-wide data is available for. This is a 14.4 per cent rise compared to the figure for March 18.

Due to the lag in the time it takes for a patient to fall ill enough with Covid to need hospital care, the latest figures are a reflection of the infections that occurred weeks ago.

NHS data suggests more than half of Covid ‘patients’ are not primarily there for the coronavirus, meaning the rise in hospital pressure may be a reflection of rising cases rather than a surge in severe disease.

The decreasing case numbers — seemingly partly driven by a downturn in swabs being carried out — comes just days before the end of free lateral flow and PCR tests in England. The tests will remain available in Scotland until May and in Wales until the end of June.

Experts have repeatedly called on ministers not to end the universal swabbing offer, warning it will leave them in the dark over major outbreaks in parts of the country. 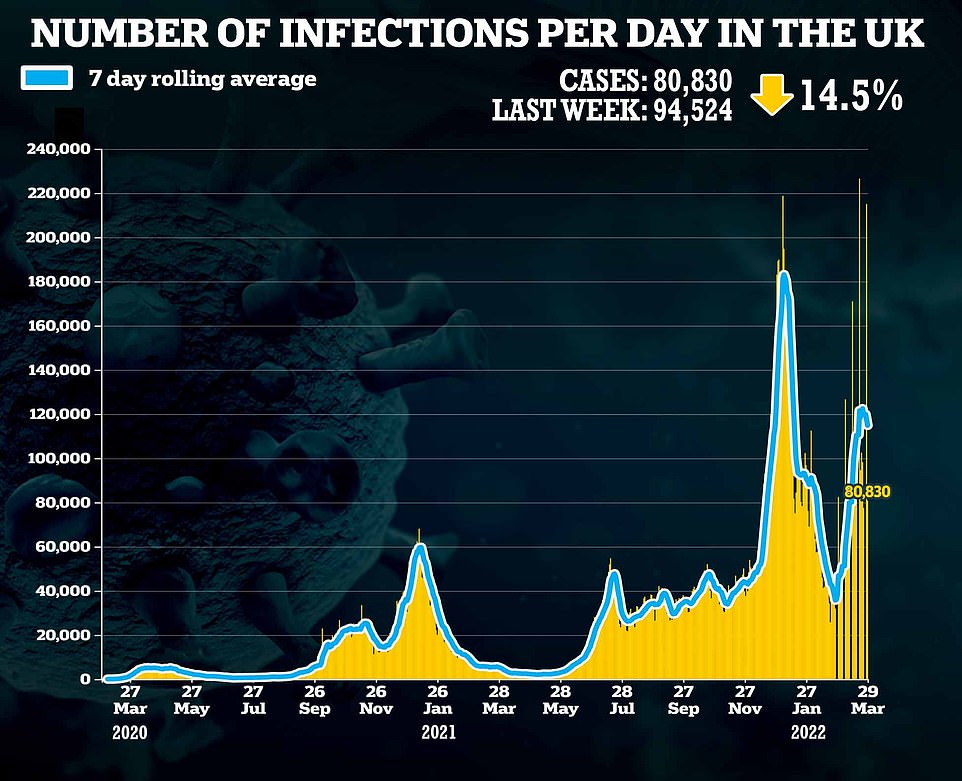 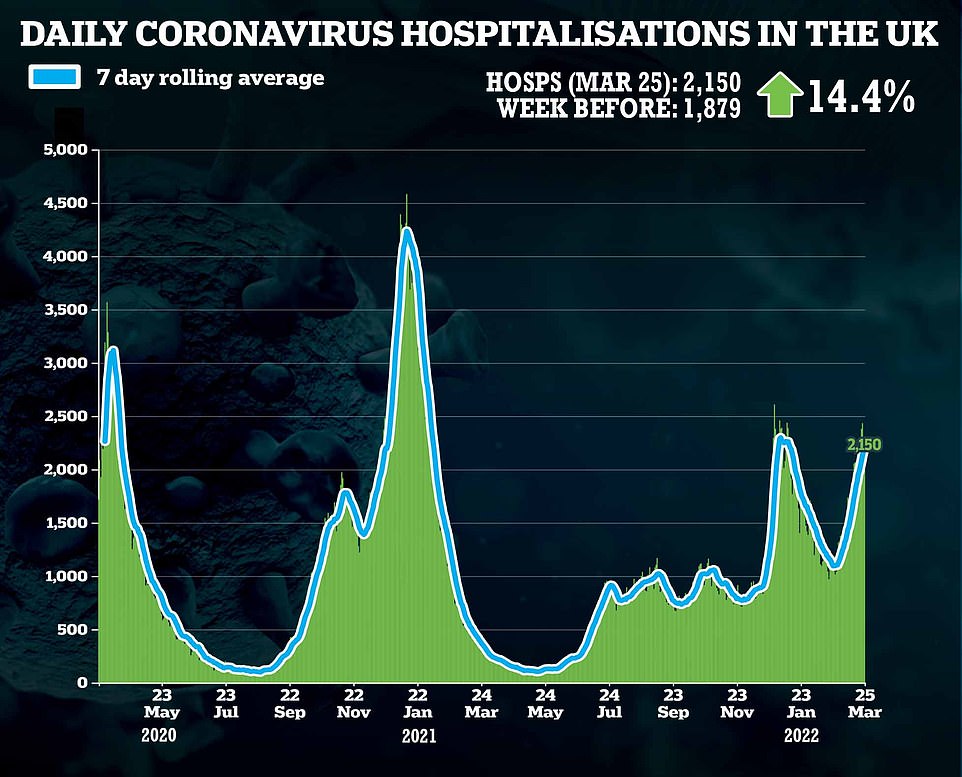 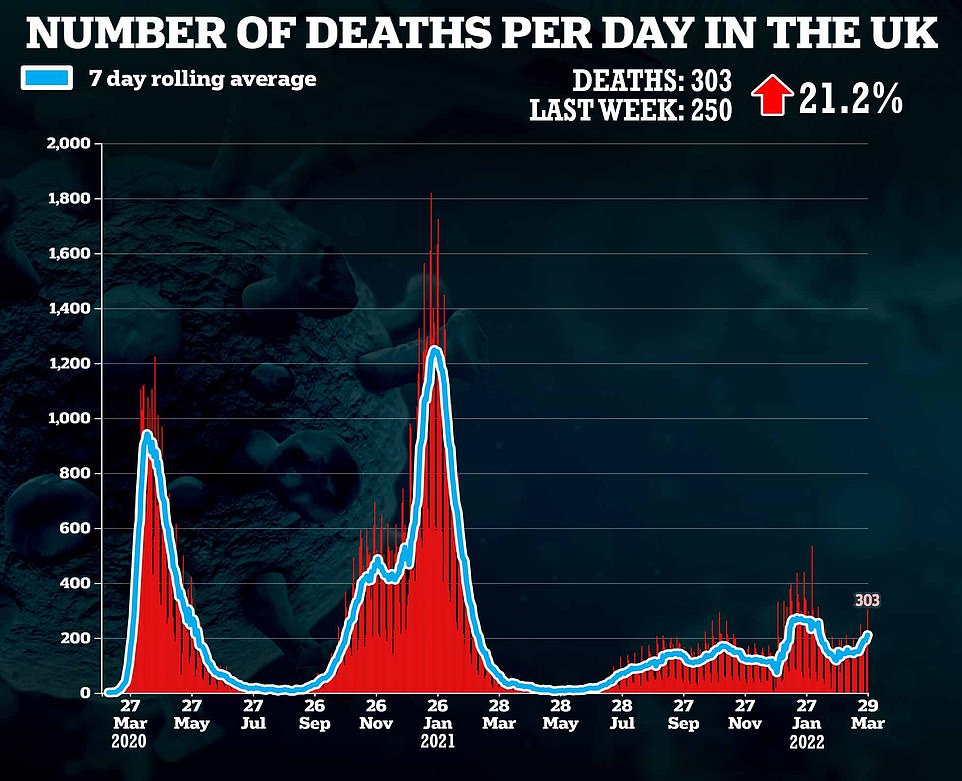 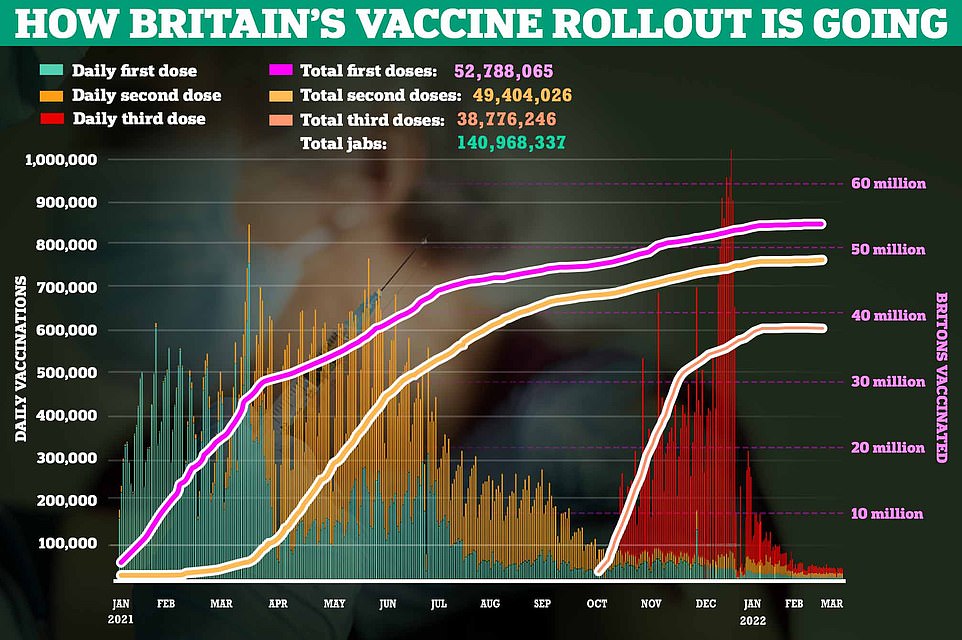 Millions of Britons could need Covid boosters every six months for the foreseeable future, a health boss HAS hinted.

Britain is still in a ‘period of uncertainty’, she said, despite all restrictions being lifted more than a month ago.

Experts are unable to predict when a new variant may occur and how it could affect immunity from vaccines, she said.

Around 8million over-75s, care home residents and immunocompromised over-12s in England are eligible for fourth doses this spring.

Fifth, and potentially even sixth jabs, will be rolled out to a wider group this autumn.

This means about 38.7 people have received three doses of Covid vaccines thus far, about 67 per cent of the eligible population.

Today’s figures come amid a looming price war over lateral flow test kits which people in England will have to buy from April 1.

It announced the price on February 23, hours after Boots became the first pharmacy to price its swabs ahead of the rule change — at £12 for a pack of five or £2.50 per individual swab.

Superdrug followed by pricing its swabs at £1.99 per test and £9.79 for a pack of five, as pharmacies scrapped to be priced lowest.

While Superdrug is maintaining its pricing, Boots has now dropped its offer to £2 per test, with packs of five costing £9.80, in line with the rival chain.

Free lateral flow tests will be rationed to the elderly and vulnerable people as part of the final stage of the Government’s living with Covid strategy — leading to fears people are stockpiling the remainder of the free swabs.

In other Covid news today, the number of people self-isolating after testing positive for Covid plummeted after Freedom Day in England, official data shows.

Just 64 per cent of people with the virus said they stayed home and quarantined for at least five days between February 28 and March 8, according to the Office for National Statistics (ONS).

This was down from 80 per cent at the start of February, before the rule to self-isolate after a diagnosis was downgraded from law to guidance on February 24.

Experts said it highlighted a ‘significant’ drop-off in adherence, coinciding with a surge in cases in England over the last month.

The ONS report — based on a survey of more than 1,300 people — found a third of all people interviewed did not fully understand the new self-isolation rules.

Nearly one in 10 claimed they did not realise they were not advised to go to the shops, walk the dog or drop their children off at school while isolating.

Just six per cent were more flagrant of the rules, deliberately ignoring guidance by going to work or seeing their family.

The report also showed three in 10 people who isolated did so for 10 days or more. Only 67 per cent of people interviewed said they understood the guidance during the most recent most recent week.

The rest either misunderstood or were unsure of what had changed. 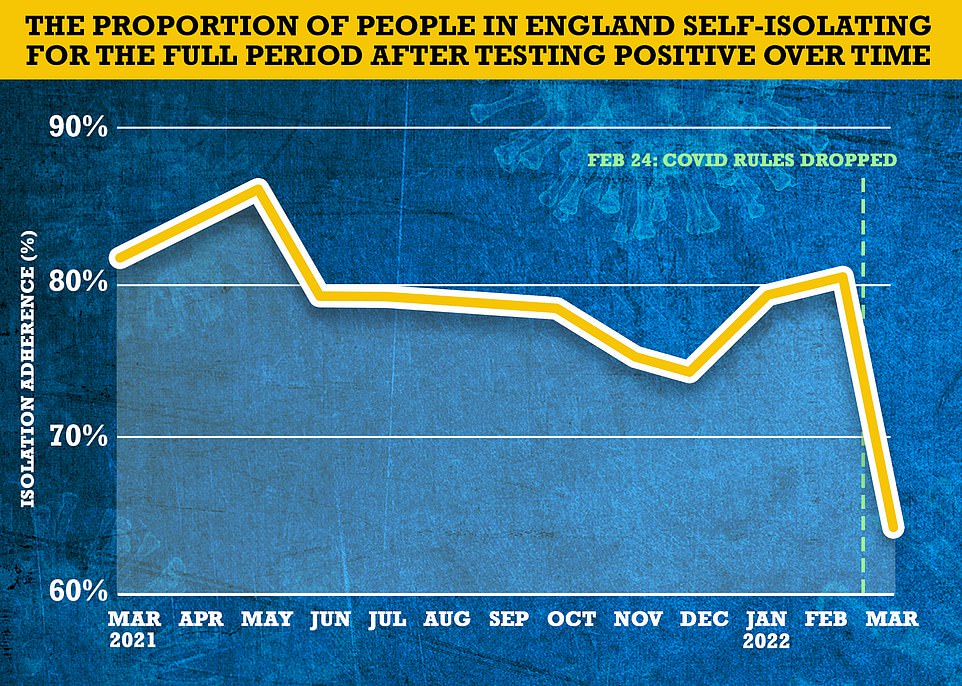 Two thirds of Britons stuck to self-isolation guidance at the start of the month after the law to remain at home was dropped by the Government, according to an Office for National Statistics (ONS) survey

Eight per cent said they could go out to take their children to school or walk their dog during isolation.

And 11 per cent claimed they thought advice allowed for trips to the shops for groceries, toiletries or medicine.

Guidance states people in self-isolation have to remain at home for the entire five days and ask friends or family to get them food and other essentials if possible.

They are also asked to cancel routine medical and dental appointments and consult their GP or dentists if they are worried about symptoms.

Of those who did not follow the advice, 94 per cent said they left the house for ‘non-compliant’ reasons.

This was up from 85 per cent the previous week and marked a record high, statisticians said.

And yesterday Dr Jenny Harries, chief executive of the UK Health Security Agency (UKHSA), hinted that millions of Britons could need Covid boosters every six months for the foreseeable future.

Dr Harries suggested the most vulnerable ‘relevant groups’ in society will still need regular top-up jabs with the UK still in a ‘period of uncertainty’, despite all restrictions being lifted more than a month ago.

Experts are unable to predict when a new variant may occur and how it could affect immunity from vaccines, she said.

Around 8million over-75s, care home residents and immunocompromised over-12s in England are eligible for fourth doses this spring. Fifth, and potentially even sixth jabs, will be rolled out to a wider group this autumn.

Dr Harries was asked at a Public Accounts Committee today whether boosters would continue to be dished out every six months.

Refusing to deny they could be topped up again after this fourth round of doses, she said: ‘For relevant groups, as per the evidence we have.