The 40-year-old man, who has not been named, was found dead in his room next to a 43-year-old woman thought to be his wife covered in cuts and bruises.

Staff at the four-star Hotel Continentale, a stone’s throw from the famous Ponte Vecchio bridge in the Renaissance city of Florence, called police after the woman asked a chambermaid for help.

Paramedics raced to the hotel and the woman was taken to the city’s Careggi hospital where she was said to be in a serious but stable condition. 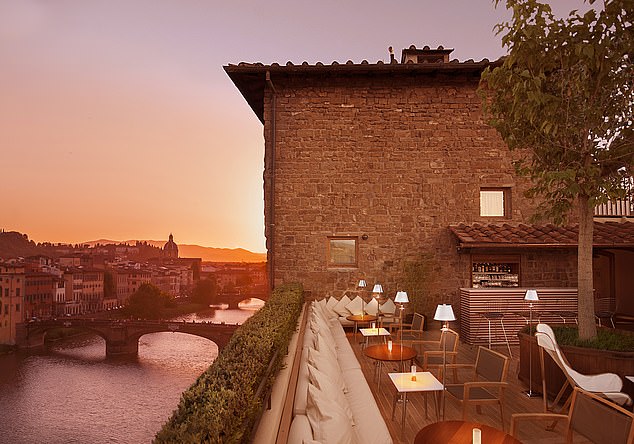 The couple had only arrived at the hotel on Friday night and the alarm was raised early on Saturday morning.

‘The man was found with a series of cuts, bruises and other injuries on his body and so was the woman, although she was more seriously hurt and the man appears to have had some sort of seizure. 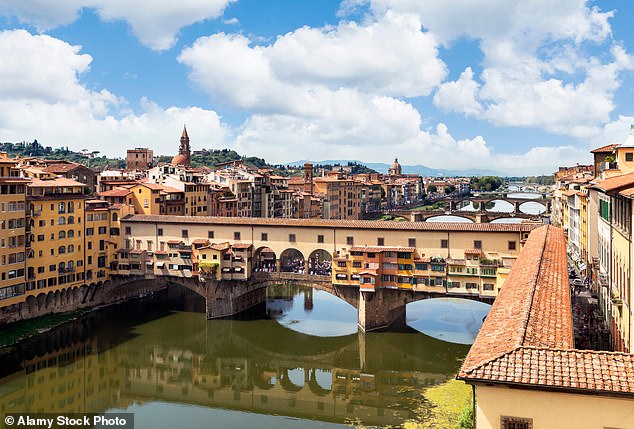 ‘There is blood in the room and the forensic teams are working there at the moment while the woman has been taken to hospital for treatment.

‘Her current condition is serious but she is stable and her injuries are not life-threatening. We hope to question her at some point in the next few hours.’

The hotel is a few minutes’ walk from the heart of the city which is popular with British holidaymakers. Prince Charles and former PM Tony Blair are regular visitors.

In travel guides the £350-a-night hotel is described as ‘playfully chic’ and it has a rooftop bar and spa and is popular with ‘honeymooners and those looking for a romantic weekend’.

A source said: ‘The woman had raised the alarm after a chambermaid knocked on the door but some of the guests had already called reception to report shouting and banging coming from the room.’

TV news footage showed several police cars and an ambulance parked outside the hotel as forensic teams walked in and out of the foyer, while tourists looked on from the nearby Ponte Vecchio bridge.

Local magistrate Ester Nocera has opened an investigation into the tragedy and was also seen walking into the hotel and speaking with forensic teams.