Brits are set to splash £2.6billion in last minute shopping today and tomorrow ahead of Christmas – with 10.4million people expected to be dashing out for final gifts and food at their local high streets, shopping centres and supermarkets.

An estimated £1.55billion is expected to be spent on ‘Frenzy Friday’ today with just over £1billion of that through bricks and mortar stores.

Another £1.13billion is predicted to be spent tomorrow on Christmas Eve – £0.84billion of which will be in stores, in a 38 per cent drop from Christmas Eve last year.

Instead people will turn to online shopping tomorrow, with a predicted spend of £0.29billion – 123 per cent more than last Christmas Eve, data from VoucherCodes shows.

Anita Naik, Savings Expert at VoucherCodes.co.uk, said: ‘The last few days before Christmas are always incredibly busy shopping days, as many of us make a dash for final touches or forgotten festive must-haves. 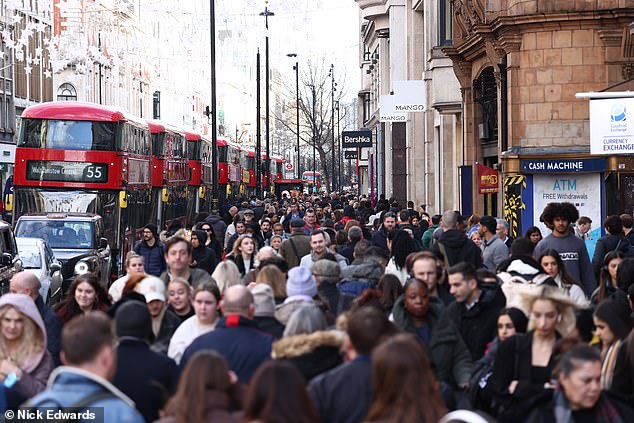 A busy Oxford Street in London today – as 10.4million people are expected to hit the shops today and tomorrow 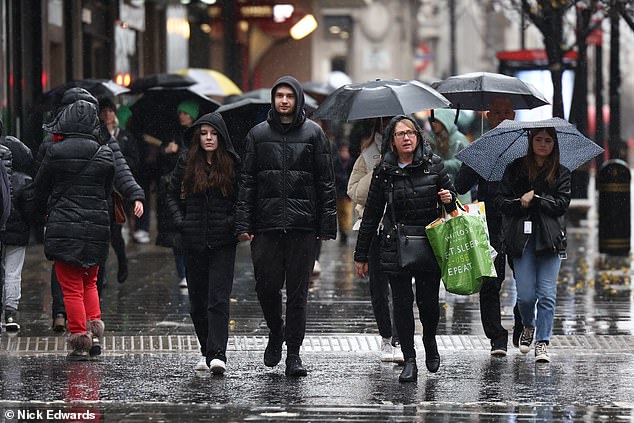 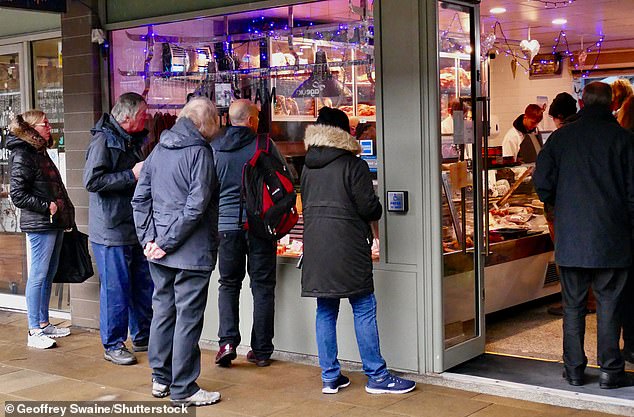 People queue on a rainy, dark morning at Jennings Butchers in Reading to collect their pre-ordered Christmas turkey today 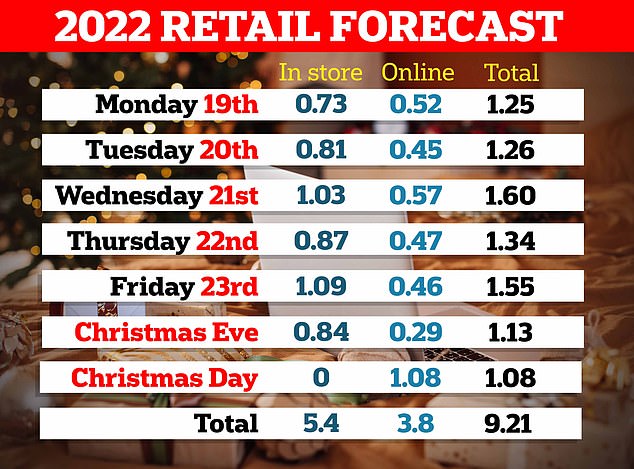 ‘However, since tomorrow’s train strikes mean many people will have less time to shop, expect stores to be even busier than usual if you’re heading out today. If you’re hitting the shops today, preparation is key to helping you keep your cool and avoid overspending. Make a list of everything you need and set a budget for your spending – and stick to it.’

Due to rail strikes, Christmas Eve sales are forecast to slump to £1.13billion, the lowest of any day this week for spending except Christmas Day itself, VoucherCodes predictions say. This is 23 per cent down on retail sales compared to Christmas Eve last year. 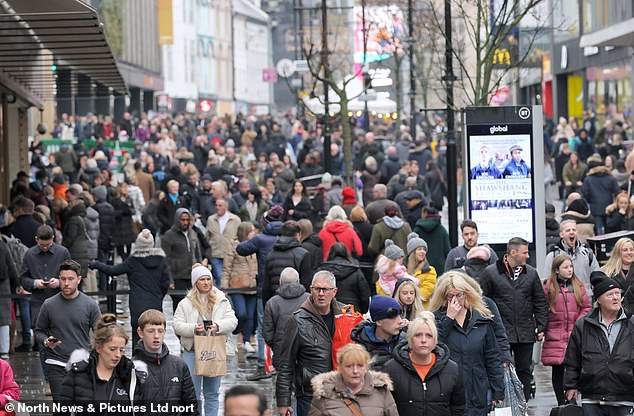 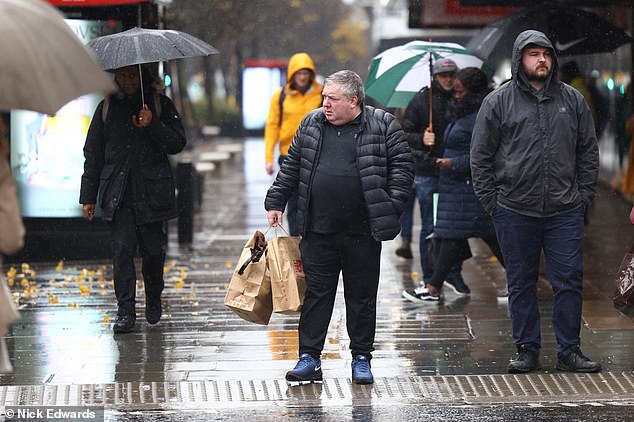 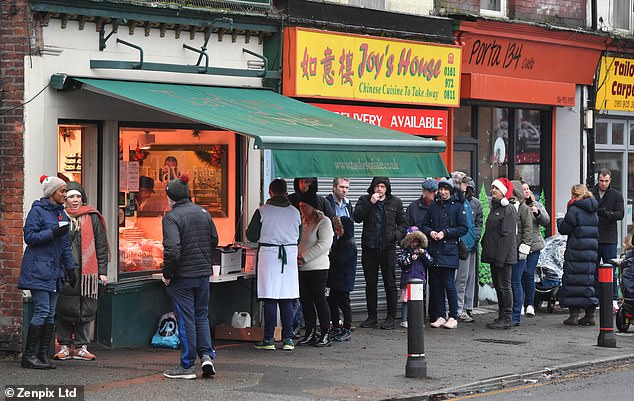 Diane​ Wehrle, Marketing and Insights Director at Spring-Board told MailOnline: ‘It appears that shoppers are still making trips to destinations and stores today, with an uplift today from last week of +20.3 per cent across all UK retail destinations which is only slightly smaller than the week on week increase yesterday of +24.3 per cent.

Stores geared up for the busiest shopping day of the year today as customers snap up last-minute Christmas gifts and high streets fight back against the impact of austerity and strikes.

And a number of retailers, including Boots, Currys and AO.com, are chasing sales by starting their Boxing Day offers today, with savings of more than 50 per cent. 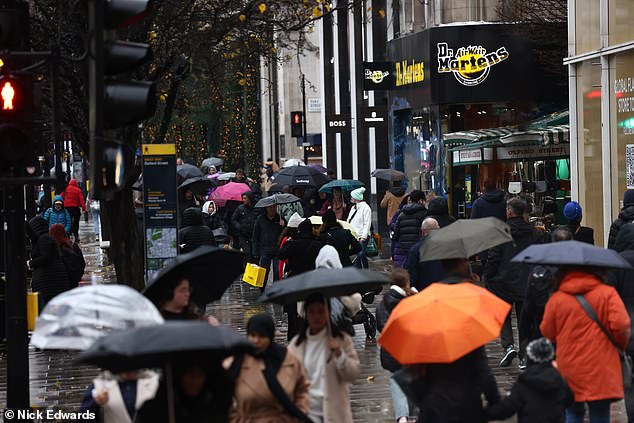 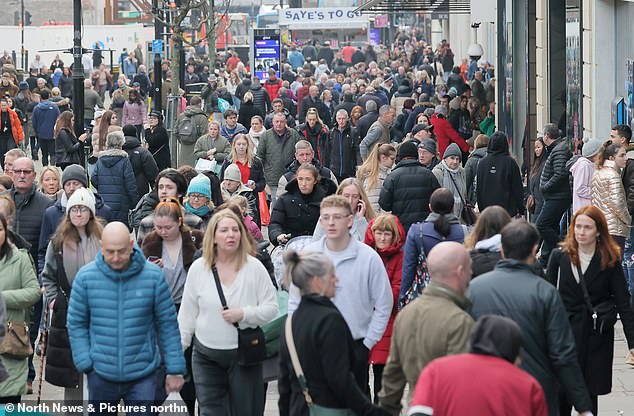 British households say they are buying fewer and cheaper presents this year as the cost of living remains the most important issue for the vast majority of people this Christmas.

Three-fifths of people said they are planning to cut what they spend this festive season compared to last year, according to an Office for National Statistics (ONS) survey conducted in the two weeks to December 18.

The data shows the vast majority of respondents, 93 per cent, identified the cost of living as the most important issue facing the UK today, followed by the NHS, the economy, and climate change and the environment.

The ONS’s latest findings come as charities have reported a boom in sales with shoppers searching for second-hand Christmas gifts, suggesting people are more cash-conscious this year.

The British Heart Foundation reported its ‘biggest ever sales week’ this December, while Barnardo’s, Age UK and Cancer Research all reported rising revenues compared with the same period last year.

Meanwhile, as temperatures dropped below zero in parts of the UK in December, more people reported feeling worried about keeping warm in their home this winter compared to the previous two weeks, the ONS said.

Around a quarter of adults said they were occasionally, hardly ever, or never able to stay comfortably warm in their home over the past two weeks.

Three-quarters reported an increase in their cost of living compared with one month ago.

However, there were signs that cost concerns are easing slightly among areas such as energy bills and rent and mortgage payments, which have remained relatively flat from the previous survey

Tens of thousands will be joining ‘click and collect’ queues to combat the delivery crisis caused by Royal Mail strikes and overwhelmed courier firms.

At the same time, supermarkets will be rammed as people make a final dash for fresh food.

And furious shoppers been forced into a last minute Christmas dash because of striking chaos claim they have spent up to three times as much this year after presents failed to arrive in time.

Katie Murray, 18, an administrator from Newcastle said: ‘I’ve had to brave the crowds to get some Nike trainers for my sister.

‘I ordered them twice but they never came so now I’ve had to make an emergency dash to the shops to get them in time for Christmas.

‘It’s really stressful, since I’ve had to buy them three times. It’s cost me £400, which is money I don’t have.

‘It’s really busy today and I would have much rather spent the day at home watching a Christmas movie rather than rushing around the crammed shops.’

Amber Oxley, 21, a recruitment worker from Newcastle said: ‘I’ve had loads of issues with deliveries because of the strikes.

‘Quite a few things haven’t arrived, such as gifts and clothes for myself, so I’ve had to do a last minute shop to get everything.

‘It’s really weird because some things have came the next day but others have never showed up, even with the same courier.

‘I started shopping really early to make sure I was organised but because of the chaos I’ve still had to buy things at the last second.

‘You can’t trust the delivery services, the other day I had a notification saying something had been delivered but the driver parked outside my house and never knocked on the door. I was fuming.’

Shona Gallon, 25-year-old marketing worker from Newcastle said: ‘I’ve had to come out to buy some aftershave for my Dad after his wasn’t delivered.

‘It cost me £60 so now I’ve spent £120 but I’ll just have to hold onto the ordered one for a birthday, whenever it’s delivered.

‘It’s really annoying. I didn’t want to come out today, it’s so busy and parking is a nightmare.

‘It’s stressful having to dash out, I wanted to avoid all of the crowds.

‘I usually have everything done months before. Thankfully this is the only thing that I need.’

High streets and shopping centres have been suffering as households cut back on festive spending amid the toughest cost of living squeeze in 70 years. They have also been clobbered by rail strikes, which have seen a sharp fall in visitor numbers to city and town centres.

Retail expert Susannah Streeter, of investment firm Hargreaves Lansdown, earlier said: ‘High streets and retail centres are hoping for a last burst of present-buying with Friday forecast to be the busiest shopping day of the year, but sales are still likely to disappoint.

‘The latest wave of strikes is set to put a dent in online sales, with warnings from retail bosses that Royal Mail walkouts mean they can’t guarantee deliveries, and other delivery firms like Evri struggling under the pressure.

‘It’s unlikely bricks and mortar stores will offset the drop in online demand given strikes by rail workers are also disrupting travel into town and city centres.’ 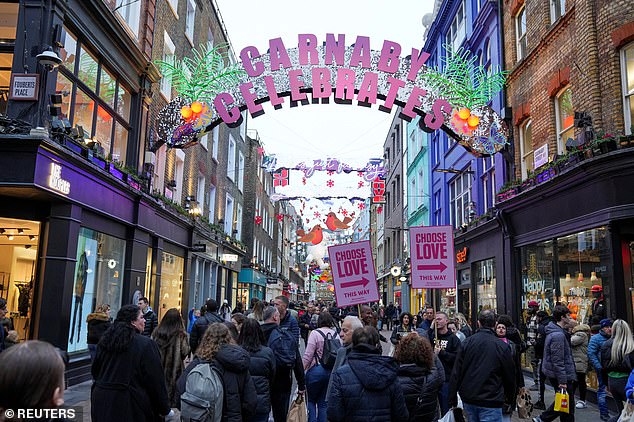 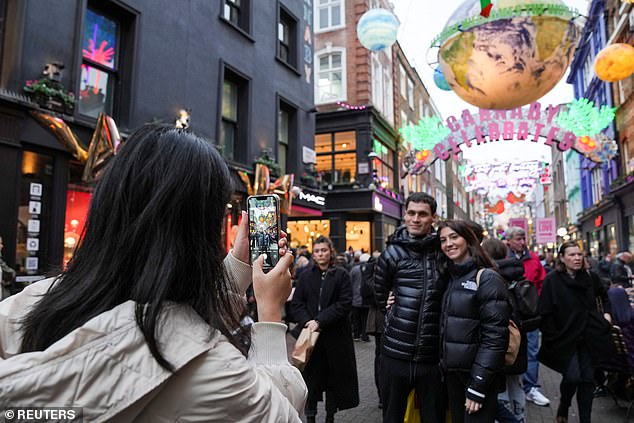 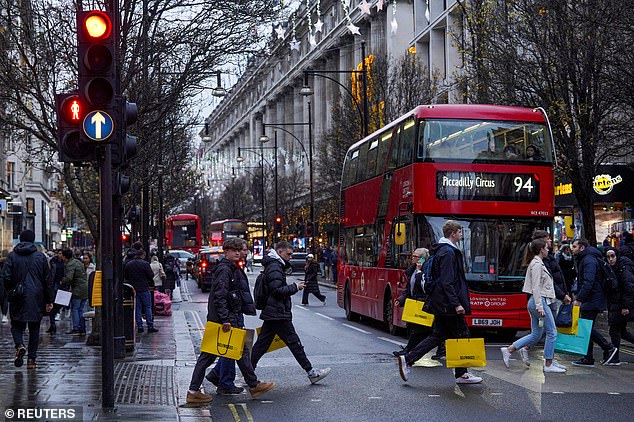 Tens of thousands will be joining ‘click and collect’ queues to combat the delivery crisis caused by Royal Mail strikes and overwhelmed courier firms. At the same time, supermarkets will be rammed as people make a final dash for fresh food. Shoppers are seen in Oxford Street 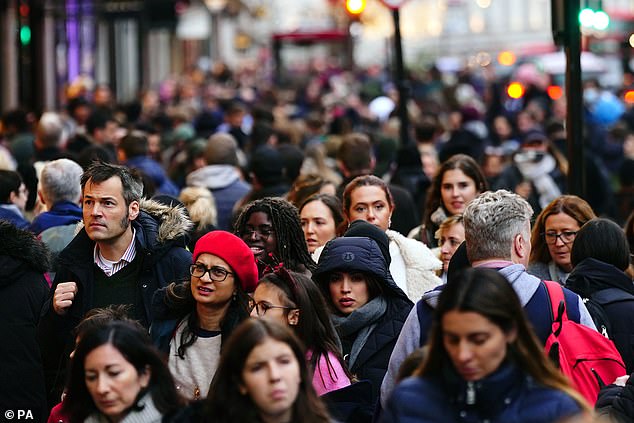 An estimated £1.55billion is expected to be spent today – Frenzy Friday – with just over £1billion of that through bricks and mortar stores. People are seen above on Regent Street in London 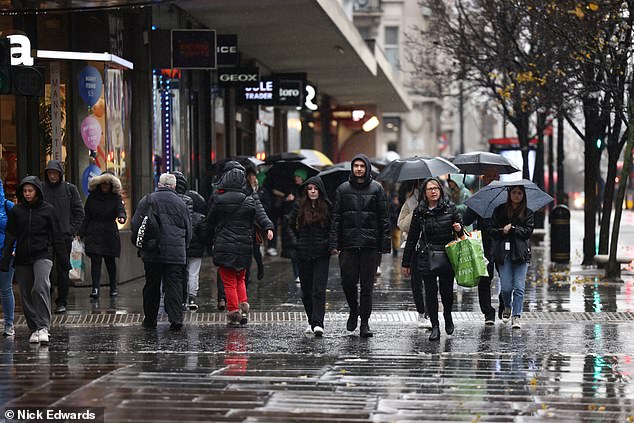 ‘It’s unlikely bricks and mortar stores will offset the drop in online demand given strikes by rail workers are also disrupting travel into town and city centres.’

Andy Sumpter, of Sensormatic Solutions, which measures shopper numbers, also said earlier: ‘We anticipate ‘Frenzy Friday’ to be one of the busiest in-store shopping days of the peak trading season, as shoppers dash into store to finalise their Christmas shopping.’

Laura Suter, head of personal finance at investment platform AJ Bell, said: ‘A quarter of people plan to cut the amount they spend on presents this year.’

There are big savings as some stores start their Boxing Day sales early. At Boots the price of No7 5 Steps to Radiant Skin has been cut by 50 per cent from £18 to £9, at AO.com an Asus Vivobook Go 14in Laptop in peacock blue is down by 26 per cent from £269 to £199 and at Currys a Lenovo Smart Clock Essential with Google Assistant has been reduced by 53 per cent from £39.99 to £18.99.