Broadcaster Caroline Jones always chose her words carefully and prepared them in advance, including the order of service for her funeral. The only thing she left blank on the program were her very final words.

“I can see the hills of home,” was the last thing she whispered the day she died, aged 84, after a fall at her Greenwich home. 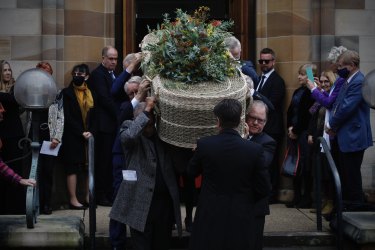 She was perhaps referring to the hills of Murrurundi, where she grew up as an only child, before leaving for the “big smoke” and a career at the ABC where she became Australia’s first female reporter on current affairs program This Day Tonight in 1968.

After she died on May 20, all that was left for her friends Jennifer Gribble and Sister Clare Koch to do was add her last words to the order of service and take the pre-prepared booklet to the printers, explained Gribble in the eulogy. She’d also been chosen in advance to deliver.

“Caroline liked to draw and to paint and was a lover of words,” Gribble said. “And was always thorough in her preparation.”

Over 400 mourners – including her “ABC family” of former colleagues Geraldine Doogue, Jenny Brockie, Kerry O’Brien, Quentin Dempster, Maxine McKew and Mike Carlton, ABC chair Ita Buttrose and managing director David Anderson – gathered on Monday to pay tribute in a Requiem Mass. Her “faith family” made up of fellow parishioners, young women she’d mentored and Afghan children from the Sydney orphanage where she volunteered and was known affectionately as “grandmother”, joined them at St Mary’s Church in North Sydney. 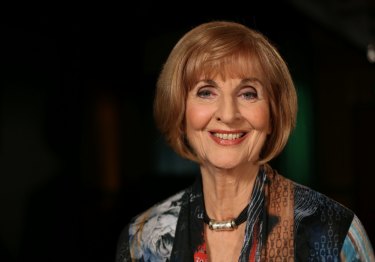 Appropriately, for the host of Radio National’s popular The Search for Meaning from 1987-94, it was the place where her own search for meaning began during Easter 1985, when she converted to Catholicism after the suicide of her mother.

In paying tribute to her friend “whose outpouring of words gladdened so many of us,” Gribble said public broadcasting became Jones’ vehicle to explore her own private grief.

“After her mother’s suicide she always wondered, ‘Could I have done more to save her?’” Gribble said. But when “her lifelong conversation with her mother came to an abrupt end” Jones said it “had given me my life’s purpose.”

“Caroline was a pioneer on so many levels,” Father Michael Kelly said of the first female presenter of Four Corners, who was most recently known to audiences as the host of Australian Story. 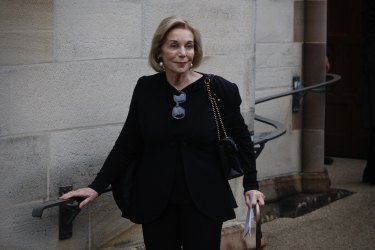 “Her faith was personal and deeply felt,” he said. While words may have been her currency, “listening was her leading edge”. 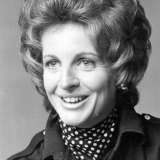 Caroline Jones on This Day Tonight in 1971.Credit:John Pearson

Despite her “always poised and self-possessed” public face, Jones was a deeply private person, for whom planning was paramount, even down to her last earthly hours.

She prepared everything about her funeral, down to the eco-friendly wicker coffin and wildflowers, which she requested years ago when she met with the Maurer family, whose funeral home conducted the service.

Six priests including Father Frank Brennan presided over the service, delivering a message from Jones’ friend of 43 years, Monsignor Tony Doherty, who said Jones touched so many Australians because she “reached into the truth of the common search for meaning in all of our lives.”

“She was a genius with the light brush,” Monsignor Doherty said.