Brooklyn Beckham and Nicola Peltz will wed under a Jewish chuppah

EXCLUSIVE: Mazel Tov! Brooklyn Beckham and Nicola Peltz will exchange vows under a chuppah in a $4M traditional Jewish ceremony at Palm Beach house where they will be serenaded by David’s BFF Marc Anthony

Brooklyn Beckham and Nicola Peltz will recite their marriage vows under a chuppah, a traditional Jewish wedding canopy this weekend, DailyMail.com can reveal.

The couple are set to tie the knot in a religious ceremony, in a nod to both Peltz and Beckham’s Jewish heritage.

Actress Nicola, whose billionaire father Nelson Peltz, 79, is Jewish, was raised in a Jewish household, while Brooklyn has Jewish roots through his soccer legend dad David’s maternal grandfather.

Brooklyn, 23, recently revealed in he would be wearing a yarmulke – a cap worn by Jewish males – while Nicola, 27, confirmed: ‘Yes, (it’s a) Jewish wedding’, in an interview with Vogue.

But DailyMail.com has learned that a chuppah has been prepared in one of the three massive white tented structures set up for Saturday’s marriage on the ocean front lawn of the sprawling Peltz compound in exclusive Palm Beach, Florida.

A chuppah is a canopy supported by four poles creating an open-sided structure that symbolizes the new home of the bride and groom.

The top is a beautiful square cloth, usually made of silk or velvet but it can also be a tallit, a Jewish prayer shawl. 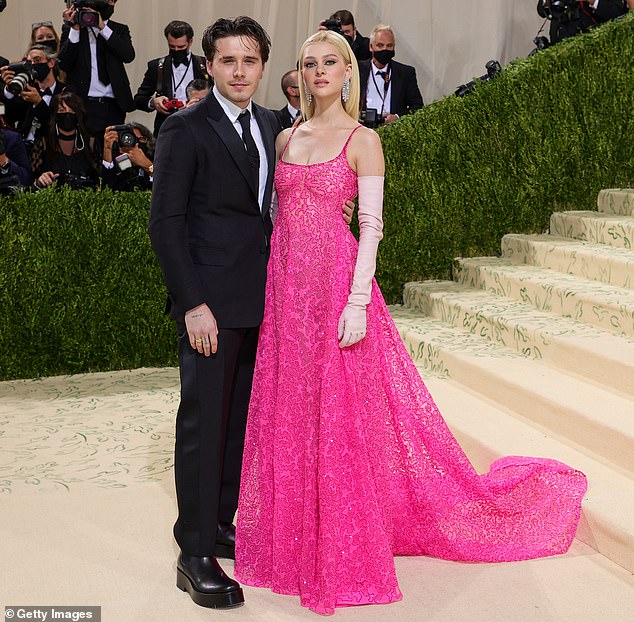 Brooklyn Beckham, 23, and his bride-to-be Nicola Peltz, 27, (pictured last September) are set to wed in a traditional Jewish ceremony over the weekend in Palm Beach, Florida 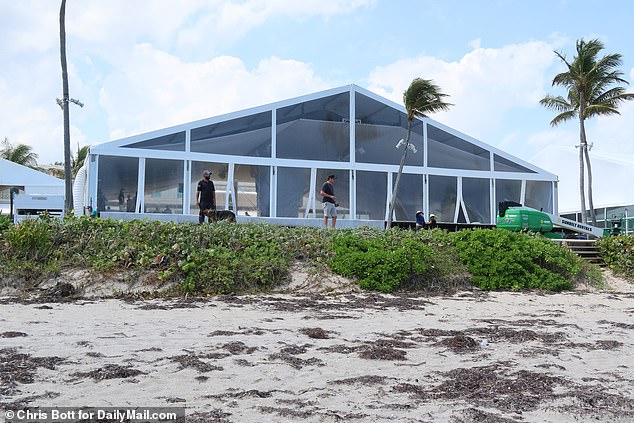 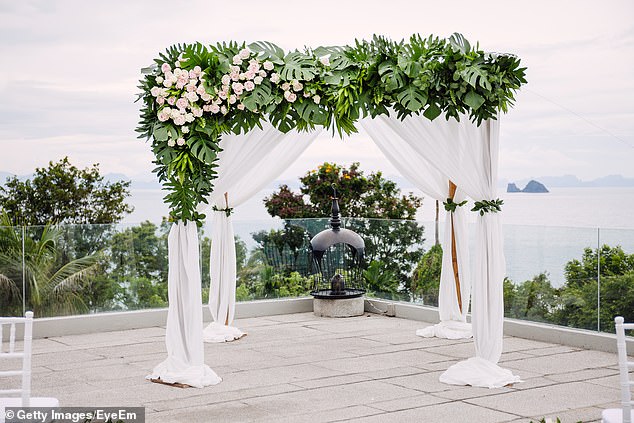 DailyMail.com has learned that a chuppah (stock photo) has been prepared in one of the three massive white tented structures set up for Saturday’s wedding ceremony on the ocean front lawn of the sprawling Peltz compound

A chuppah can be fairly simple, or garlanded with flowers.

Brooklyn would enter the chuppah first, to be joined by Nicola – followed by David, former Spice Girls wife Victoria, 47, financier Peltz and his third wife, former model Claudia, 65, and the rabbi.

DailyMail.com has learned another intriguing clue about the timing of the extravaganza, reported to be costing nearly $4million and with guests including celebrity chef Gordon Ramsay, actress Eva Longoria and supermodel Gigi Hadid.

Jewish weddings held on Saturdays, the Sabbath, are traditionally held after the sun has gone down.

DailyMail.com understands that on Thursday evening around 7pm, technicians were tirelessly working to balance the indoor lighting inside the huge tents to replicate that of the outside – possibly suggesting a sunset ceremony.

It is not known if aspiring chef Brooklyn and Nicola, star of A&E drama, Bates Motel, and 2014 action film, Transformers: Age of Extinction, have signed a traditional Jewish marriage contract called a ketubah.

However the couple reportedly have signed the ‘mother and father’ of all pre-nups, to protect the respective fortunes of both families.

Nelson Peltz is worth $1.7billion according to Forbes, putting the Beckham fortune of $450million in the shade. 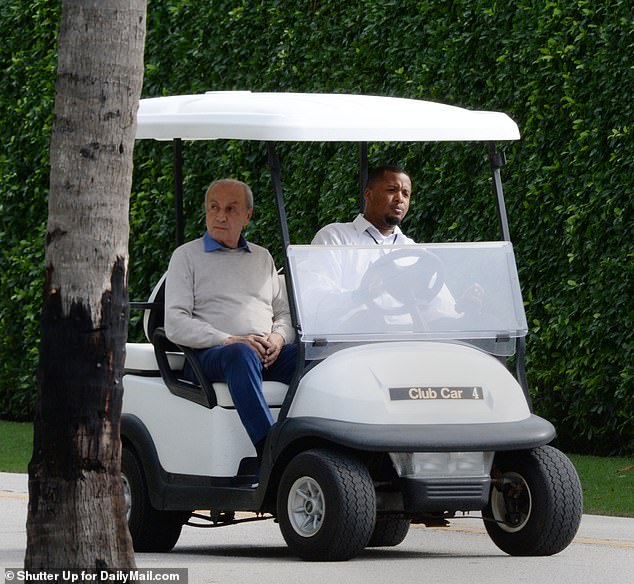 Nelson Peltz was spotted being driven over to his other estate in Palm Beach, Florida. The billionaire was being driven by security over to the beach side of his properties 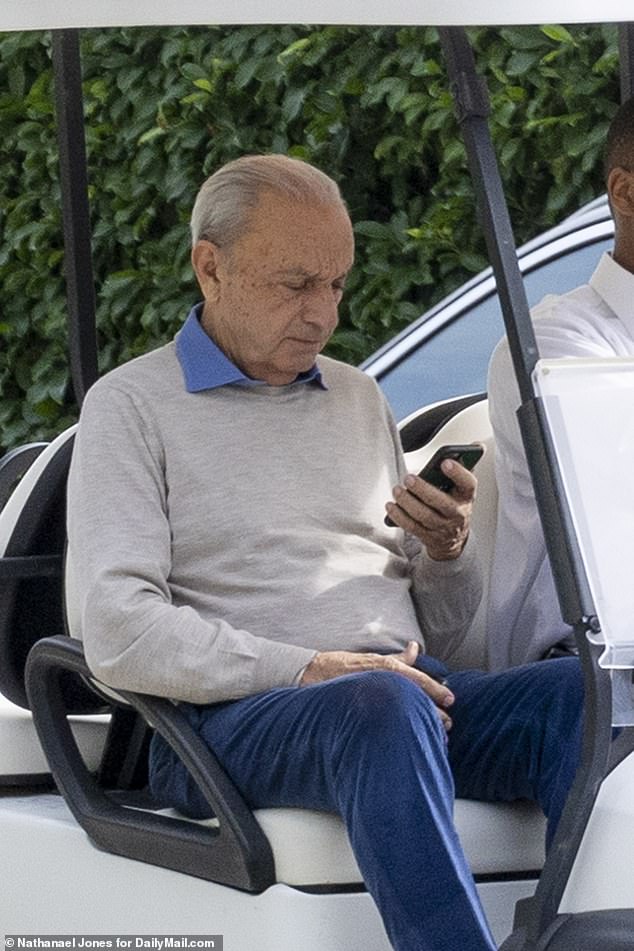 Peltz has a net worth of $1.7billion and has homes in Palm Beach as well as his home state of New York 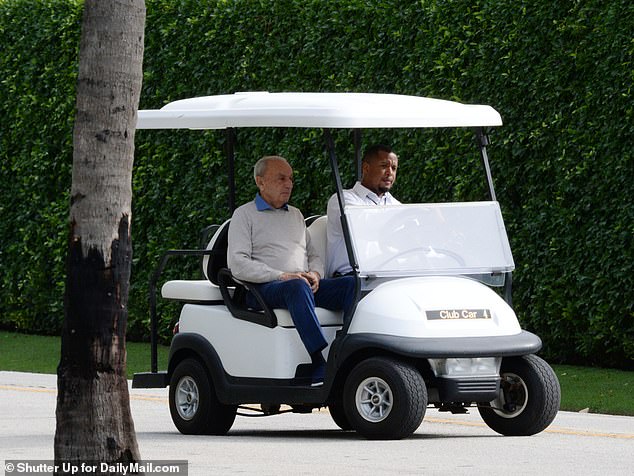 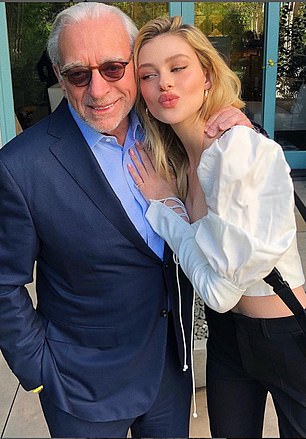 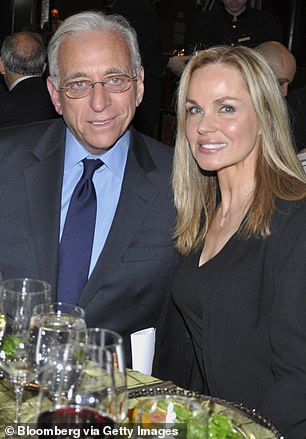 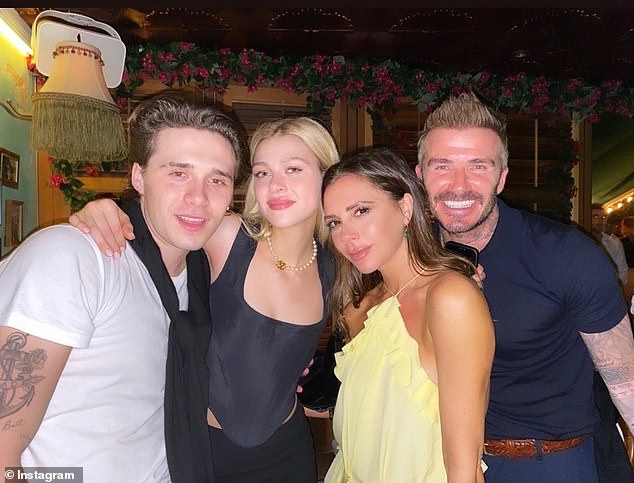 It is understood the chuppah will be to the side of a stage, with flowers all around.

Additionally, it is believed some windows on the tented structures facing out on to a public beach will be tinted.

Both families are taking no chances with Covid. Some staff working on the preparations have been sent for Covid tests, we can reveal.

DailyMail.com can also disclose that a separate cocktail tent has been established for the celebration.

The wedding couple have already revealed that a flavored martini – either espresso, lychee or elderflower – will be their drink of choice on the big day.

It is also understood that there will be an ‘after party’ for guests situated in part of the $103million Peltz compound that is over the road from the 27-bedroom mansion, called Mountsorrel.

Fleets of trucks have been coming and going for days delivering food, white orchids and other essentials for the extravaganza – including a piano.

Jennifer Lopez’s ex-husband Marc Anthony has been tapped to provide some of the entertainment, a source close to the event’s organization has told DailyMail.com.

The Latin pop idol, 53, and David – known as Becks and Goldenballs – are long standing pals.

The singer, known for anthems to love such as, You Sang To Me, and, I Need To Know, is godfather to Brooklyn’s brother Cruz, 17, and sister Harper, 10. 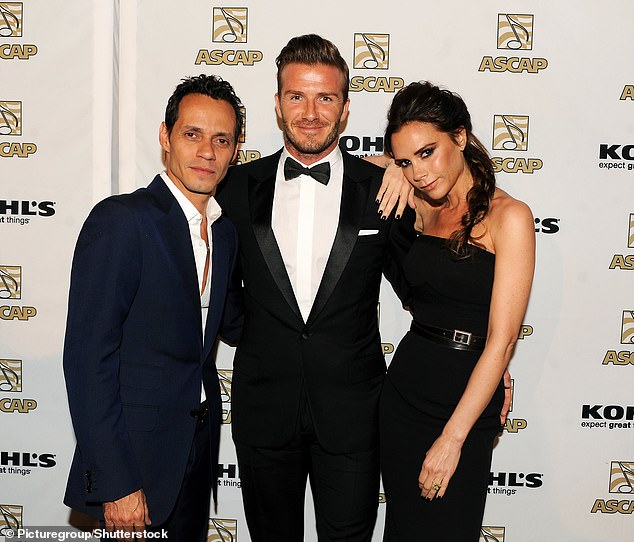 Singer and close friend of the Beckhams, Marc Anthony has been tapped to provide some of the entertainment, a source close to the event’s organization has told DailyMail.com 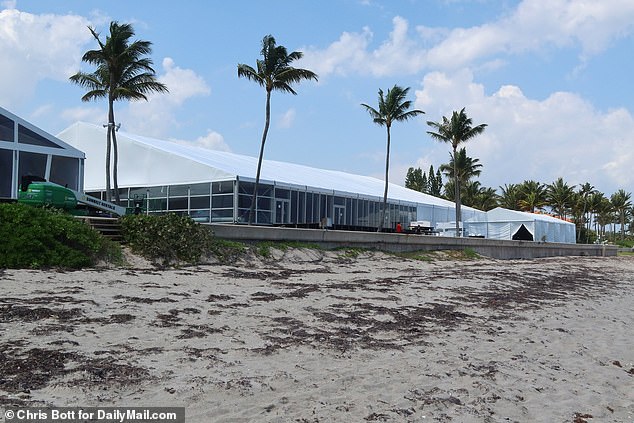 The wedding will see the likes of Gordon Ramsay, Marc Anthony and Eva Longoria attend and is set to take place at the Peltz family’s 44,000 sq ft house 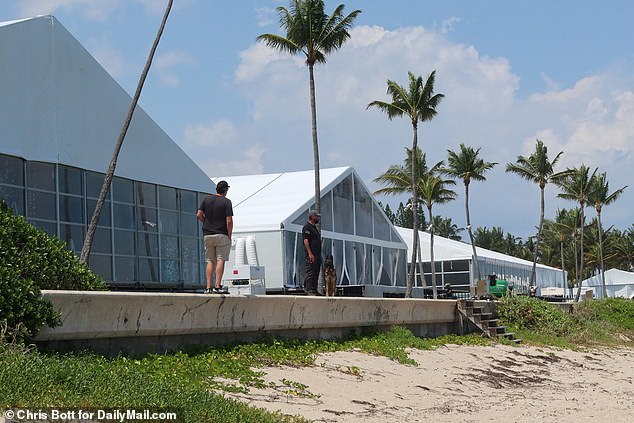 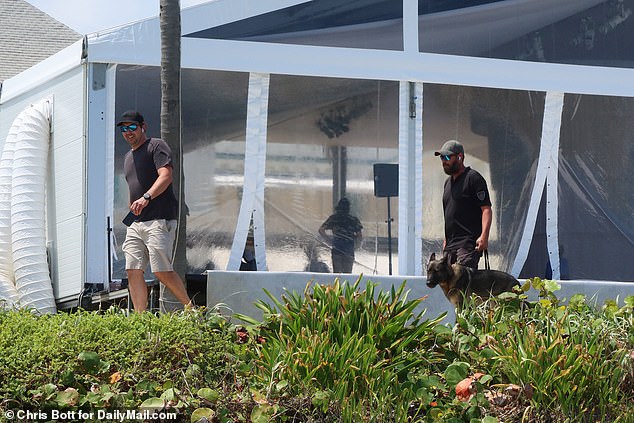 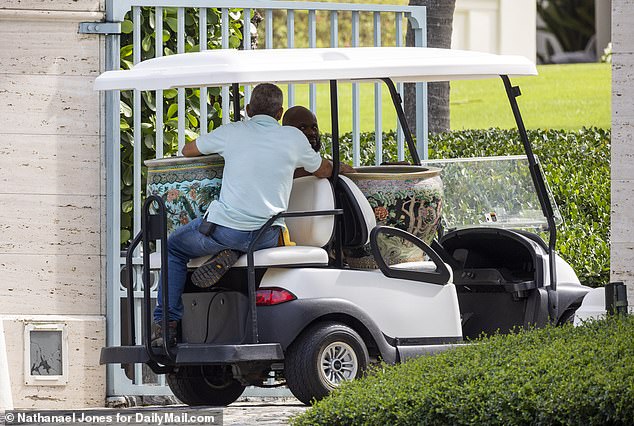 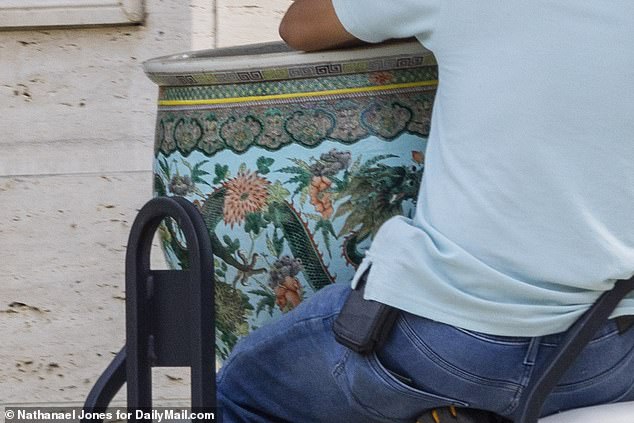 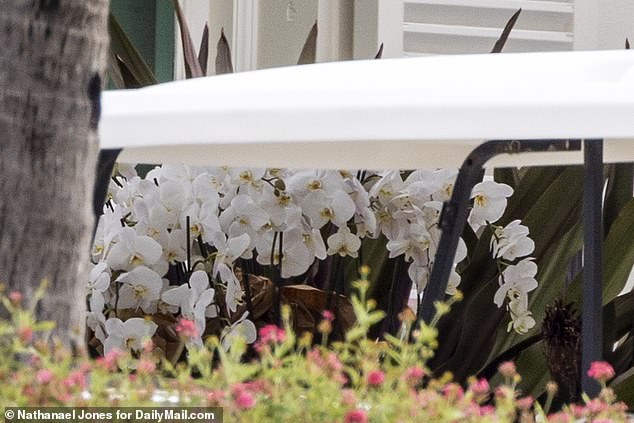 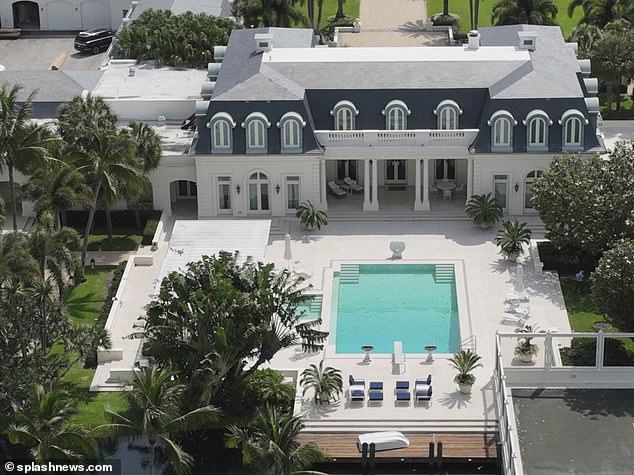 When Anthony celebrated 30 years in showbiz last year, Becks put out a heartfelt Instagram message reading: ‘My friend, my brother… today we celebrate 30 years of his brilliance, passion, dedication and pure generosity. Happy 30th anniversary my brother. I love you…’

On Friday morning, Nelson Peltz was spotted being driven on a golf cart from the property over the road from Mountsorrel and into the ocean front home. He has been described as devoutly Jewish, while Nicola’s mother Claudia is not Jewish.

The previous day Brooklyn was also seen on a golf cart, looking sweaty and exhausted after shooting some hoops on a nearby basketball court.

He appeared mildly sunburned while shirtless and wearing a baseball cap with pals on the cart as it pulled up to the main gate of Mountsorrel. At one point he bowed his head and clasped his hands over his eyes, in apparent tiredness.

It is not known exactly when former Manchester United hero David and Victoria will be heading to Palm Beach for the celebrations, which are reported to be lasting three days.

On Thursday, they were both still in Miami on their $5million yacht, called Seven – the number Becks used in the playing career and daughter Harper’s middle name.

They were joined by Brooklyn’s brother Romeo, 19, who will be best man. He was spotted cuddling his girlfriend Miami Regan as they lounged on one of the decks. 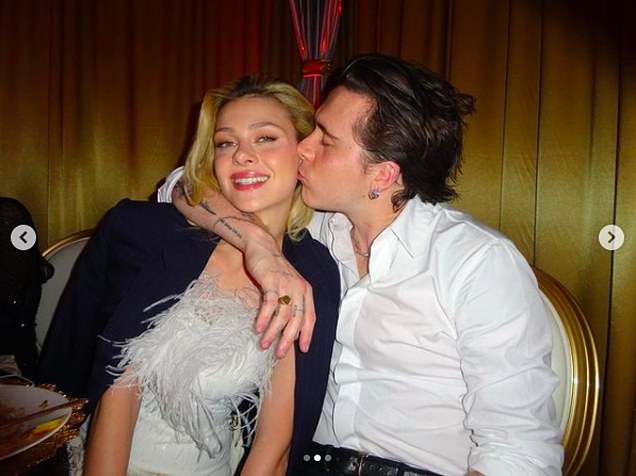 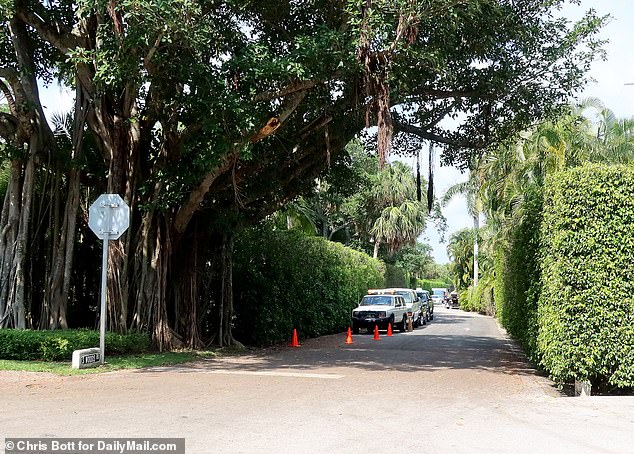 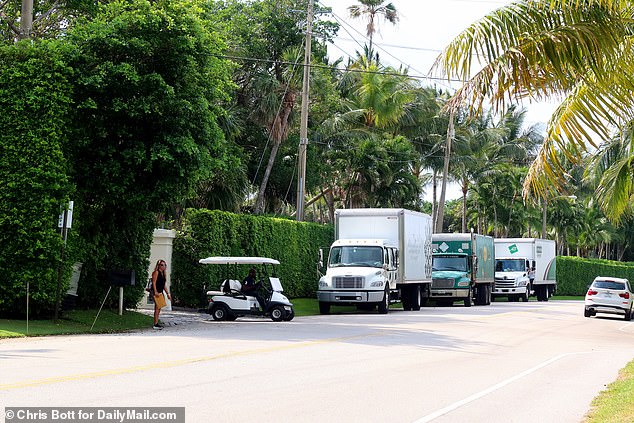 Later Beckham, president of his soccer club InterMiami FC, posted a pic of himself on Instagram posing with staff at a Miami sandwich shop that he said served ‘the best Cuban in town!’

Brooklyn and Nicola began dating just before the start of the Covid pandemic in 2020, having met two years earlier.

They live in a $10million home in Beverly Hills, California, as Nicole continues working as an actress and Brooklyn produces culinary videos in his quest to become a chef. He was previously studying photography.

One big influence in Brooklyn’s life will not be at the ceremony. Godfather Sir Elton John will be performing in Lexington, Kentucky, as part of his rescheduled Yellow Brick Road tour. However his partner Davis Furnish is reported to be attending the nuptials.