Calculated risk: Age-old question as young decide whether to get AstraZeneca jab

Richard Hinman spent hours online studying the risks of the AstraZeneca vaccine for people in their 20s before rolling up his sleeve for his first dose on July 2.

The 27-year-old British national, now living in Melbourne, concluded it was more likely he would get a blood clot on a long-haul flight back to the UK than from the AstraZeneca vaccine. 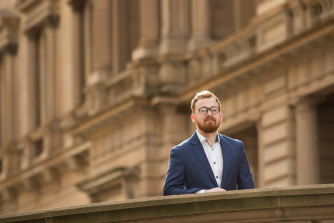 Richard Hinman spent hours online analysing the risks and benefits of getting the AstraZeneca vaccine for people aged in their 20s before getting his first dose on July 2.Credit:Jason South

“We take risks every day of our lives to do the things we want to do. If being vaccinated sooner means I can see my family earlier and protect people I care about, then it is a risk I am more than willing to take.”

Around the country, young Australians are pondering whether they should go to their GPs to discuss getting the AstraZeneca vaccine, whether the tiny risk of a serious blood clot is worth taking to protect themselves and others from COVID-19. Doctors, too, are wondering what advice they should give their young patients.

Of those who develop the potential side effect, the death rate in Australia is about 3 per cent, or roughly one in 2 million.

The advice from the Australian Technical Advisory Group on Immunisation, which advises the government on vaccines, is that Pfizer is preferred for under-60s because of the slightly increased risk of blood clots linked to the AstraZeneca jab.

However, the country’s senior immunisation advisers changed their guidance on the gap between the first and second doses of the AstraZeneca vaccine on Tuesday as the outbreak in NSW worsened.

People living in outbreak areas who do not have immediate access to a Pfizer vaccine are also being encouraged to consider being immunised with AstraZeneca instead.

Since Prime Minister Scott Morrison encouraged under 60s late last month “to go and have that discussion with your GP” if they wish to receive the AstraZeneca vaccine, almost 20,800 Australians under the age of 40 have had their first shot. All up, almost 140,000 people under 40 have received an AstraZeneca jab.

Victorian GP Umair Masood spoke to a 19-year-old man on Tuesday morning who had requested the AstraZeneca vaccine to protect himself and his family. “Like many young people I have seen, he chose to go ahead with it,” Dr Masood said.

Young people had increasingly arrived at his Macedon Ranges clinic in recent days, alarmed by news of a 16-year-old in intensive care in NSW.

“Each day we prescribe medication to people based on their medical issues after weighing up the risks and benefits,” Dr Masood said. “This is no different.”

Not all doctors feel the same. Melbourne GP Ines Rio has so far declined to administer the AstraZeneca dose to otherwise healthy patients under 40.

She said that without clear detail from the federal government on when Pfizer will be available to Australians under 40, she was unable to give her patients the full picture.

“An informed discussion with a patient means knowing when they will be able to get Pfizer to be able to give them guidance on whether they should have AstraZeneca now,” she said.

Opinions among infectious disease experts also differ. Whenever University of Sydney vaccine and infectious diseases pediatrician Professor Robert Booy is asked about AstraZeneca by someone under 40, he tells them: “It is safe and it is effective. Full stop.”

“I recommend to my family, nearest and dearest, young people, my own nieces and nephews, to have vaccination. I also tell them it’s perfectly reasonable to have AstraZeneca if they choose to.”

The director of Melbourne’s Peter Doherty Institute for Infection and Immunity, Professor Sharon Lewin, is often asked the same question, including by her children, aged 23 and 27. She has advised them follow the advice of Australia’s expert advisory panel and wait for Pfizer.

“When I weigh up the risk and benefit knowing that we will have either vaccines before the end of the year, I have advised my children to have the Pfizer vaccine.”

However, Professor Lewin, 58, encouraged her 86-year-old mother to get the AstraZeneca vaccine and will soon have her second shot of the same vaccine.

“It is a really reasonable thing to want AstraZeneca as a young person and your risk of developing a very rare complication is about one in 300,000 and early detection means the are outcomes are now much better,” Professor Lewin said. “So the risk of death is very, very small.”

Elsternwick man Jesse Mansfield got his first AstraZeneca dose last week after becoming fed up waiting for Pfizer to be available for his age group.

The 24-year-old, who has mild asthma, was told by a doctor he did not fit the eligibility criteria for the first phase of the vaccine rollout. 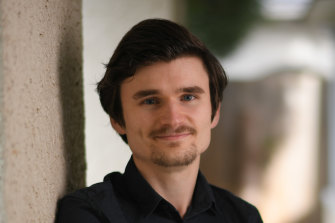 Jesse Mansfield got fed up waiting for a Pfizer jab.Credit:Eddie Jim

“The prospect of having no protection and an elevated risk meant of course I was going to get the vaccine earlier if I can,” Mr Mansfield said. “It was just obvious to me. I could be waiting months for Pfizer and I didn’t want to risk that with that outbreak unfolding in NSW.”

Professor Greg Dore, an infectious diseases physician at St Vincent’s Hospital in Sydney, believes mixed messages around AstraZeneca have left younger Australians with little capacity to evaluate the realistic risk of the vaccine.

The epidemiologist at the Kirby Institute suspects changing advice around AstraZeneca, conflicting views in the medical community and media coverage highlighting the risks were all partly to blame for “frightening a lot of people about the vaccine”.

“If people are concerned about dying from a severe clot of AstraZeneca with a one-in-a-million risk then they are not really gauging the risk of all sorts of other things we do, because it’s such an exceedingly low risk.”

“We need to realise the option of waiting for Pfizer is not zero risk at all. It’s just harder to define because we don’t know what lies ahead.”

“The minute the Prime Minister announced I could get the AstraZeneca vaccine I made an appointment with my GP,” she said.

“In the middle of a global pandemic, I decided to take a risk, but it’s a risk that could pay off. It could stop me from going to hospital or passing on the virus on to healthcare worker, a stranger or someone I love.”