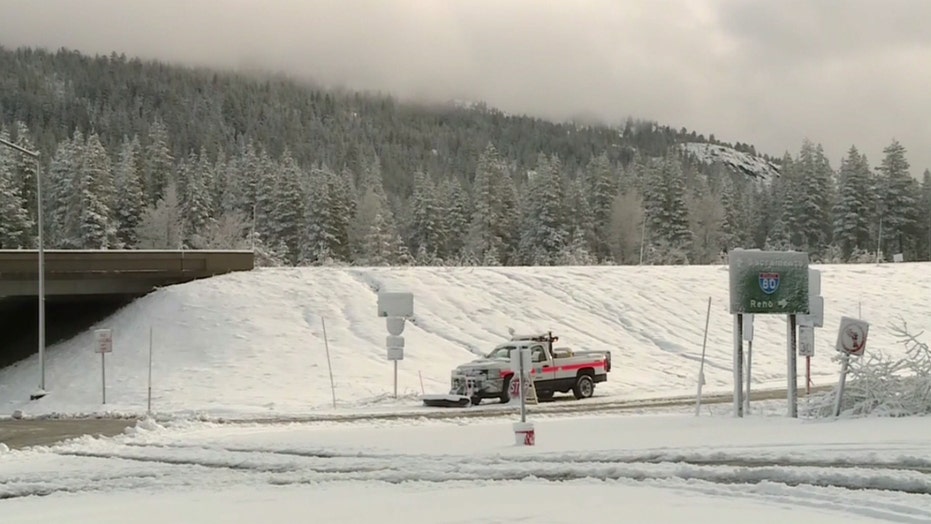 Fox News Flash top headlines for May 16 are here. Check out what’s clicking on Foxnews.com

It may be May, but Spring has not quite sprung in the Golden State.

Parts of California still resemble a scene out of winter, with a series of storms bringing several feet of snow to mountain areas, ahead of a "significant" severe weather threat across the nation's midsection.

The National Weather Service said that a series of Pacific storms are bringing heavy rain, mountain snow, and gusty winds across the West. A winter storm warning was issued Wednesday night that will run through Friday morning for the southern Sierra Nevada. 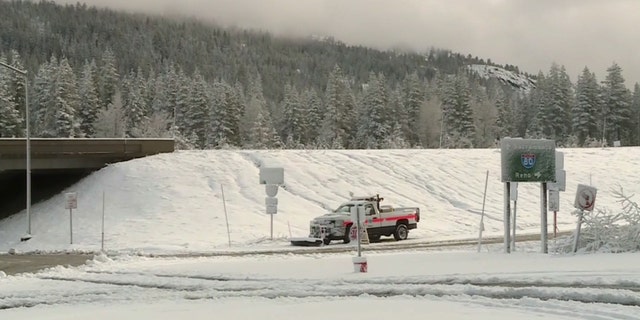 Heavy snow was reported in Kingsville, Calif. on Thursday as a storm system moved into the region.
(KVOR via NNS)

The first storm, headed in from the Gulf of Alaska, is expected to bring up to an inch of rain in some areas of the Sacramento Valley and as much as 2 feet of snow in some mountain spots at elevations of about 7,000 feet.

Snow could fall at lower elevations on Thursday with 6-12 inches expected at pass levels, the National Weather Service said.

"Daytime highs today will drop as well down to as much as 20 degrees below normal for the date," the agency added.

In Yosemite National Park, spokesman Scott Gediman told the Associated Press that popular 16-mile tourist route Glacier Point Road, which offers sweeping views of Yosemite Valley and Half Dome, closed Wednesday and will remain shuttered until the storms pass. A second system is expected to impact the region on Saturday.

The current storm is not expected to create widespread flooding because some snow has already melted, according to California Office of Emergency Services Director Mark Ghilarducci. 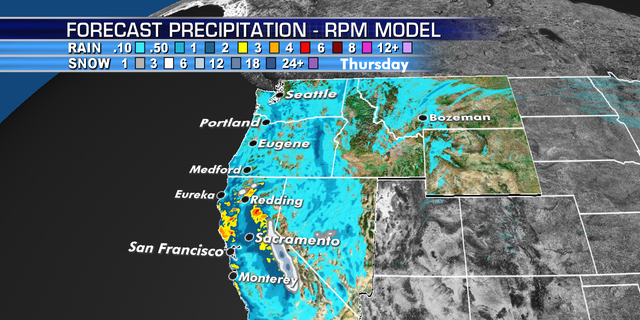 A series of storm system are bringing heavy rain and mountain snow to California through the weekend.
(Fox News)

In Butte County, Sheriff Kory Honea took to Facebook to reassure residents about the ability of the Oroville Dam to handle inflow from the upcoming storms. Two years ago, 200,000 people had to evacuate amid fears prompted by heavy rain.

As the system heads east, attention will then to the Central Plains to the Ohio Valley where the NWS said a "significant severe weather event" is forecast beginning Friday.

"Very large hail, damaging winds, tornadoes, and heavy rain can be expected," the NWS said. "Severe weather threats will continue through the weekend and into next week."

On Friday, there is an "enhanced" risk of severe thunderstorms with the threat of "very large hail" and tornadoes across Nebraska and West Texas, according to the NWW's Storm Prediction Center. 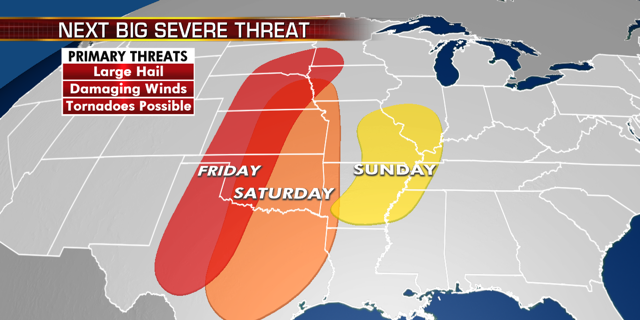 A "significant" severe weather threat is expected over the nation’s mid-section starting on Friday, according to the National Weather Service.
(Fox News)

By Saturday the threat stretches from Iowa on southward to central and northeast Texas, including the Dallas/Fort Worth Metroplex. 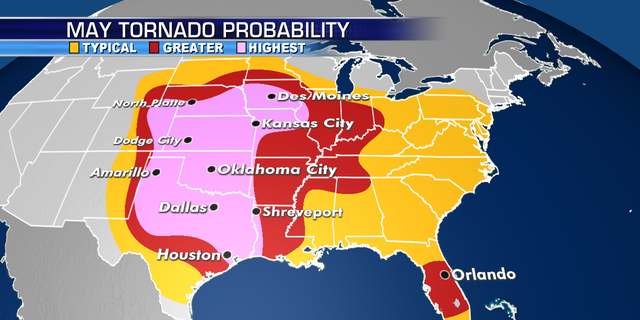 The areas at most risk of seeing tornadoes in May.
(Fox News)

"Severe storms are possible over a large area Saturday, from Texas to Iowa, with the greatest threat across central/northeast Texas toward the Arklatex where a few tornadoes, hail and wind are possible," the NWS said.