When Ray Palmer wears the service medals awarded to his son, who was killed in 2010 when a US Black Hawk helicopter crash-landed on a night mission in Afghanistan, it leads to confusion on Anzac Day.

This year will be Mr Palmer’s 10th march in honour of his son, Private Scott Palmer. And despite wearing the medals on his right side – only the recipient can wear them on their left – he is often quizzed during what is meant to be a moment of quiet and personal reflection. 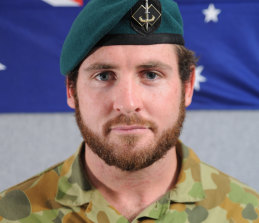 “People say, ‘you’ve been a lot of places serving the country haven’t you?’ I say, ‘these belong to my son and I wear them for him’,” Mr Palmer said.

“If you had something that says KIA (killed in action) or KIS (killed in service), it would signify that you are wearing them on behalf of someone you’ve lost.”

The Defence Honours and Awards Tribunal is conducting an inquiry into recognition for members and their families of the Australian Defence Force who are injured, wounded or killed in or as a result of service. Those injured could wear a special clasp attached to the service medal, and family could wear something similar for someone killed. 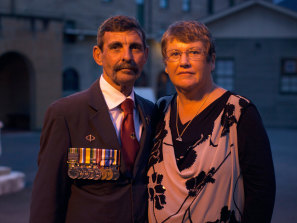 Ray and Pam Palmer, the parents of Scott Palmer, who died in a helicopter accident in Afghanistan in 2010. Credit:James Brickwood

Northern Territory federal Labor MP Luke Gosling supports the idea of a gold clasp to go on a campaign medal.

“Australian soldiers have been fighting for this type of recognition since the Korean War when they worked alongside Americans,” he said.

“The Americans have got their Purple Heart and some Australian soldiers came back and said there should be something similar for those killed or wounded in action. 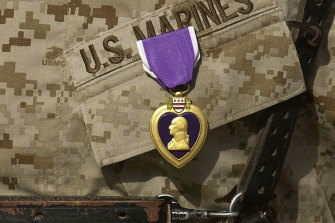 The Purple Heart is a United States military decoration awarded to those wounded or killed while serving.Credit:Getty

“We know that of the many of the suicides we have seen in the veteran and defence community there’s a much higher proportion for those that are medically discharged and I think the recognition of a clasp could have a big role for those who aren’t killed but are permanently affected by their service. The clasp would provide some recognition of that.”

Jay Kopplemann, executive director of the tribunal, says the issue is being considered “starting with a clean slate”.

“We have received from veterans and their families a range of submissions relating to service from the Second World War onwards,” he said.

The campaign was the initiative of warrant officer Kerry Danes, who served with the Special Air Service Regiment. He launched it following the collision of two Black Hawk helicopters during a training exercise in Townsville in 1996, which killed 18 soldiers.

“The medals that represent the ADF member’s service do not currently reflect, record or conclude their sacrifices made in service,” Mr Danes said.

Corporal Cameron Baird, who received the VC posthumously for service in Afghanistan.

“Having served with many of our fallen, and those wounded and injured, I believe their medals should accurately record their service and sacrifice, and especially where they have made the ultimate sacrifice in death.

“The simplicity of our campaign is to formalise already accepted service-related categories onto an appropriate medallic clasp, adorning either the Australian Defence Medal, a campaign medal or another medal already in service.”

Doug Baird, whose son Cameron Baird was posthumously awarded Australia’s 100th Victoria Cross for acts of extraordinary gallantry after he was killed in 2013 under machine-gun fire in Afghanistan, says there is no doubt some sort of recognition is needed.

“I have no problem with the clasp but I think a medal with killed in action on it or something like that could be the way to go,” he said.

The tribunal panel, comprised of senior military figures, will make a recommendation to the government later this year.