Can the women of Australia believe Morrison now?

Faced with the choice between justice for women or the slow destruction of his government, Scott Morrison discovered his new priority on Tuesday: “I believe in all the women of Australia.”

But can the women of Australia believe him? The most convincing first step he could take would be to deal decisively with his Attorney-General, Christian Porter. The Prime Minister cannot continue to allow an accused rapist to remain in his cabinet as the first law officer of the land. And Morrison gave clear signals on Tuesday that he knows it is politically intolerable. 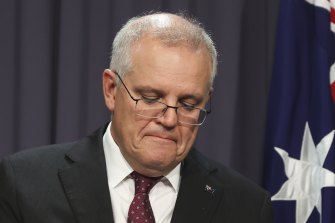 Scott Morrison says he has been listening to women.Credit:Alex Ellinghausen

He has dodged and ducked and delayed in the belief that the whole thing would just disappear like a standard political scandal.

But it is much more than a political scandal. It is a civilisational scandal of unfairness to women, and its time of reckoning has arrived.

Morrison belatedly has understood the point. He has a list of practical measures in mind to deal with problems of justice and fairness for women. Each is important and together they have potential to be transformational if the government can implement them in good faith. But no one will believe he is sincere so long as he continues to shelter Porter.

The Attorney-General has become the emblem of male entitlement and the lightning rod for women’s anger. By protecting Porter, Morrison generated a national protest movement. And without an independent test of whether Porter is a fit and proper person, his name can never be cleared.

The Prime Minister has taken massive political pain for Porter. But by saying that he was taking advice on how Porter measures up to the code of ministerial conduct, Morrison was signalling that the pain cannot go on.

There are several reasons that women – and men – believe Morrison has been insincere in his expressions of concern for women. One is that he hid in his office when a women’s rally called on him. Another is that his rhetoric has been boofheaded. A third is that his multitudinous inquiries are blatant efforts to shelve the hard problems. A prime minister sends inquiries to his own department or to the Department of Finance because that is where you send them to die a slow, silent death.

Even in his Tuesday effort to confess his sins and declare his conversion, Morrison bungled yet again. After weeks of trying to spread the blame to Labor, he tried to spread it to the media. This was a sure sign that he is under great pressure and not coping.

Yet he might still be able to recover, in spite of everything. He said at his press conference that “I acknowledge that many Australians, especially women, believe that I have not heard them, and that greatly distresses me."

In return, they stopped hearing him. Now that he wants to act, to be taken seriously, to be heard, he will have to demonstrate sincerity.

So long as Porter remains in charge of Australia’s justice system, no one will believe that the government is sincere about justice for women.

Australia, bel, Can, of, the, Women:
World News