This summer, after the US Supreme Court struck down the landmark 1973 decision in Roe v Wade, Americans flooded Google and typed in “how to move to Canada” — the search term spiked 850 per cent in one hour. “How to become a Canadian citizen” spiked 550 per cent.

Moving to Canada has long been a knee-jerk impulse when domestic politics turn sour, and not just in the United States. In Britain, the “How to move to Canada” search shot up in June 2016, shortly after the Brexit referendum. 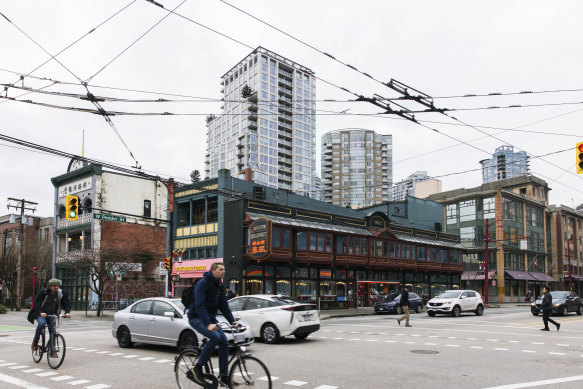 Traffic in the Chinatown district of Vancouver where immigrants make up a significant portion of the population,Credit:Jackie Dives/The New York Times

But Canada may not want you anymore — at least, it’s making it much harder to buy property there. Since January 1, America’s friendly neighbour to the north has enacted a wide-ranging ban on the purchase of residential property by non-Canadians for two years.

Like many countries during the pandemic, Canada saw huge price increases for both sales and rentals as borrowing rates plunged to record lows, taking inventory with them. In the midst of a bruising election campaign in 2021, Prime Minister Justin Trudeau’s Liberal Party of Canada took a swing at a housing crisis that was becoming a political crisis. “The desirability of Canadian homes is attracting profiteers, wealthy corporations, and foreign investors,” proclaimed a campaign website. “Homes are for people, not investors.”

After a close election victory, the party last spring quietly introduced the Prohibition on the Purchase of Residential Property by Non-Canadians Act, putting foreign homebuyers in the crosshairs.

The proposal was a response to a widespread political sentiment, but it “sounded absurd,” said Jacky Chan, the Vancouver-based founder and chief executive of BakerWest Real Estate, which markets luxury high-rise condominiums nationwide.

“As multicultural as Vancouver and Canada are, there is a sentiment around, ‘Yeah, Asians, foreigners, immigrants are coming here, buying up real estate, eating supply and driving up prices,’” said Chan, who was born in Hong Kong and has lived in Vancouver for 29 years. “Most foreigners buying real estate are not speculators. They’re immigrants buying homes to live in.”

Besides, regional governments were already working to address skyrocketing house prices. In Ontario, the provincial government raised the real estate speculation tax for foreign buyers from 20 per cent to 25 per cent. British Columbia enacted a 20 per cent tax on international homebuyers. And the measures seemed to be working — foreign investment in real estate fell from a high of 9 per cent of residential sales in June 2016 to about 1 per cent in June 2022, according to data from the British Columbia Ministry of Finance. “No developer in his right mind was even targeting them,” Chan said. “Why would a ban make sense?”

By mid-2022, prices across Canada had already begun to recede. But in June, without fanfare, the prohibition on foreign buyers was signed into law. In fact, it had gone largely undetected, even by many real estate professionals.

“This was one line in a document,” said Julie Côté, senior manager of the real estate taxation practice for nonresidents at the FL Fuller Landau accounting firm in Montreal. “Then, silence. They never let the world know this was actually happening.”

Trudeau and other politicians have said little about the law since it passed, and it has received scant coverage from local media outlets. “Trying to get information from the government about this has been a hell of a task,” Côté said. 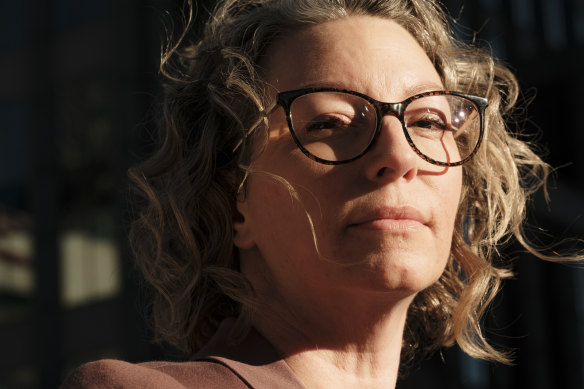 That may be because the law has stirred accusations of xenophobia. As immigration numbers hit all-time highs in Canada — census data released in October revealed that immigrants now make up 23 per cent of the population, with the vast majority coming from India and China — some industry veterans say there is a connection.

Non-Canadians “got a lot of blame for the housing crisis, and it was a big issue politically,” said Brendon Ogmundson, chief economist of the British Columbia Real Estate Association. “But the pandemic shut off nearly the entire segment of foreign buyers, and prices still hit an all-time high. That’s evidence that foreign buyers are not significant drivers of the market, and this ban will not affect anything.”

Michael Bourque, the Ottawa-based chief executive of the Canadian Real Estate Association, called the law “an affront to Canada’s brand as a welcoming, multicultural nation.”

“We’re telling people we don’t want them here,” he said.

In key foreign-buyer markets such as Hong Kong, where immigration to Canada is booming, the law will have little impact on demand, said Alisha Ma, managing partner of the Hong Kong firm Halcyon Counsel Ltd., which helps clients immigrate to Canada. “Clients are willing to wait for permanent resident status, and since we’re in a high-interest-rate environment, there’s even more of an incentive to wait,” Ma said.

But she argued that the new policy is aimed squarely at “domestic vultures in Canada,” and dismissed the notion that it is discriminatory. “It doesn’t contradict Canada’s welcoming immigration policies,” she said. “They’re just slamming the door on property investors.”

Federal officials declined to answer questions for this article. Housing Minister Ahmed Hussen did not return requests for comment. In an emailed statement, Adrienne Vaupshas, a spokesperson for Deputy Prime Minister and Minister of Finance Chrystia Freeland, said the legislation targets a narrow segment of speculators. “This measure prohibits foreign commercial enterprises and people who are not Canadian citizens or permanent residents from acquiring nonrecreational, residential property in Canada,” Vaupshas wrote.

On December 21, six months after the law was passed, the government issued a brief set of regulations, including exemptions and enforcement. They explained that the prohibition applies only in “census metropolitan areas” and “census agglomerations” — basically, cities that meet certain population criteria — and not to vacation homes in “recreational areas.” Exemptions include buyers with Canadian spouses or partners, refugees, and foreigners buying multifamily dwellings with more than three units (which could theoretically be rented to Canadians).

As for scofflaws, penalties of up to $10,000 Canadian may be imposed “on any party found guilty of knowingly assisting a non-Canadian in contravening the prohibition.” And offending buyers may be forced to sell the property, “receiving no more than the purchase price paid.” 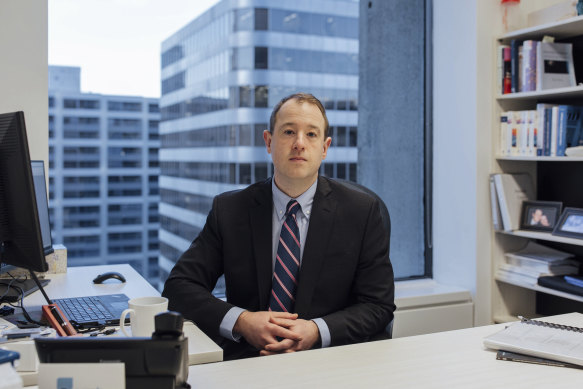 For some, the regulations fell short of resolving the nuances of the law. “There are no significant clarifications,” said Stephen Cryne, the president and chief executive of the Canadian Employee Relocation Council, which advises companies on workforce mobility.

Brokers say the ambiguity has left them paralysed. Rather than rush to beat the looming deadline, most foreign buyers will simply wait for the law to expire in two years. “My clients are in a holding pattern,” said Liza Kaufman, founding partner of Sotheby’s International Realty Quebec in Montreal. “When they hear even professionals can’t get clarity on the law, they’re opting to sit this one out.”

Only one of her clients, an American retiree who declined to be interviewed, is “rushing” to buy a Montreal pied-à-terre before the ban takes effect, she said.

Although it exempts newcomers with residency status, the ban comes amid aggressive new immigration targets in Canada, announced last month and aimed at filling nearly 1 million job vacancies across the country. The government has proposed welcoming 465,000 new permanent residents in 2023 and more than 500,000 in 2025, even as applications for permanent residency fell sharply this year, according to government figures. During a news conference to announce the goals, Sean Fraser, Canada’s minister of Immigration, Refugees and Citizenship, said: “Look, folks, it’s simple to me: Canada needs more people.”

But Cryne said the law could have the opposite result. “This will have a chilling effect for people who want to move here, work here, and settle with their families,” he said.

Jenny Kwan, a member of Parliament who represents Vancouver East and the housing critic for Canada’s opposition New Democratic Party, said the law is missing the real culprits in the housing crisis. “The government must target real estate investment trusts,” or companies that invest in real estate for profit, she said. “We need to curb the financialisation of housing.”

Some of these ideas are already in effect, combining with rising rates and inflation to slow price growth. The Trudeau government this year unveiled an anti-flipping tax to discourage property speculators, along with an “underused property” tax on international owners whose residences sit unoccupied for more than 180 days in a year.

This year, the Canada Mortgage and Housing Corp. reported that 3.5 million more homes would need to be built by 2030 to achieve affordability for all Canadians, but campaigns around housing affordability “have focused on demand suppression, like our foreign-buyer taxes, and they’re politically favorable,” said Kevin Crigger, president of the Toronto Regional Real Estate Board, an industry association. “But for the last decade, we’ve called on government to look at supply.”

For now, Canada’s largest cities are seeing fewer international buyers casing the market. In Greater Toronto, “foreign participation in the market is, at most, 3 to 6 per cent,” Crigger said. “Even if it’s that high, it’s nonexistent in the grand scheme of things.”

But a new wave of international buyers seems to be biding their time, willing to wait as the ban runs its course. Pauline Aunger, a real estate broker at Royal LePage Advantage in Smith’s Falls, Ontario, said she saw a flurry of buying activity after the initial announcement in April. Since then, she said, clients have been standing by for guidance, but not buying: “It’s very much a wait-and-see situation.”