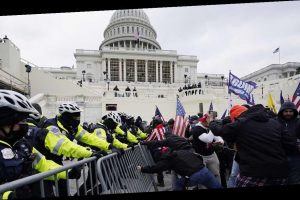 U.S. Capitol Police apologized to Congress Tuesday for failing to meet its own standards to immediately secure the Capitol building “in the face of a terrorist attack by tens of thousands of insurrectionists determined to stop the certification of Electoral College votes.”

“I am here to offer my sincerest apologies on behalf of the Department,” acting Chief of Police Yogananda D. Pittman said in a lengthy opening statement during a House Appropriations Committee hearing. “But I am also here to tell you what we are doing to secure the U.S. Capitol from future threats — whether domestic or foreign.”

Pittman cited problems with manpower, delayed approval to send in National Guardsmen, and radio communications issues on the day of the attack that would need to be addressed going forward. She also admitted the department “should have been more prepared for this attack” given intelligence it received by Jan. 4 indicating that the Jan. 6 event “would not be like any of the previous protests held in 2020.”

Capitol Police did fulfill “its mission of protecting Members and democracy ultimately prevailed,” but she said, “insurrectionists’ actions and the Department’s inability to immediately secure the U.S. Capitol emboldened the insurrectionists and horrified millions of Americans.”

She explained that the department was already aware that militia groups and White supremacists organizations would be attending an event in Washington, D.C. on Jan. 6 and that some participants were intending to bring firearms and other weapons to the event.

“We knew there was a strong potential for violence and that Congress was the target,” Pittman said.

The events that unfolded at the U.S. Capitol on Jan. 6 forever changed how we look at the “People’s House,” according to Pittman, who explained that the campus was designed to be open and welcoming to visitors, and because of this, it was difficult to fortify.

It hadn’t until recently been surrounded by eight-foot global fencing.

“Even before September 11, 2001, security experts, including former USCP chiefs of police, argued that more needed to be done to protect the Capitol campus — although I doubt many would have thought it would be necessary to protect it against our own citizens,” she said.

Former Chief Steven Sund ‒ who resigned after the riot ‒ had put in a request on Jan. 4 for the Capitol Police Board to declare a state of emergency and authorize a request to secure National Guard support. But the board denied his request and instead encouraged Sund to contact the DC National Guard to determine how many Guardsmen could be sent to the Capitol on short notice, which he did.

Sund “immediately coordinated with federal agencies and law enforcement partners across the area to gain additional boots on the ground,” according to Pittman’s account, and he also lobbied the board for authorization to bring in the National Guard, but he was not granted authorization for over an hour.

Before rioters ever neared the Capitol on Jan. 6, Pittman said Capitol Police had taken steps to change its existing operational plan to require all available officers to be working that day and increase the number of Civil Disturbance Units scheduled to work the event from four to seven, including four hard platoons equipped with less lethal munitions.

The plan also activated its SWAT team to extract violent demonstrators or those with weapons from the rally and to engage in counter sniper activity, and adapted a new security perimeter based on instructions it received from the House and Senate Sergeants at Arms.

There were over 1,200 sworn personnel working on site when the attack occurred, which Pittman said, “was no match for the tens of thousands of insurrectionists (many armed) attacking the Capitol and refusing to comply with lawful orders.”

“In my experience, I do not believe there was any preparations that would have allowed for an open campus in which lawful protesters could exercise their First Amendment right to free speech and at the same time prevented the attack on Capital grounds that day,” Pittman said. “However, I do believe certain challenges the department faced the day of the attack could have been overcome with additional preparation.”

The department’s lockdown policy to close and seal every entrance to the Capitol was not consistently followed and a union representing officers reported that communications were difficult to hear on their radios over the ruckus of the attack. That left officers without a clear line of communication operating with limited information about what was occurring and with little instruction from leadership.

Communications over the PA system were also not clear enough, Pittman said.