A massive cargo ship made a series of unusual movements while anchored in the closest spot to a Southern California oil pipeline that ruptured and sent crude washing up on beaches, according to data collected by a marine navigation service.

The Coast Guard is investigating whether a ship anchor might have snagged and bent the pipeline owned by Amplify Energy, a Houston-based company that operates three offshore oil platforms south of Los Angeles.

The Associated Press reviewed more than two weeks of data from MarineTraffic, a navigation service that tracks radio signals from transponders that broadcast the locations of ships and large boats every few minutes.

That data shows the Rotterdam Express, a German-flagged ship nearly 1,000 feet (305 meters) long, was assigned to anchorage SF-3, the closest to where the pipeline ruptured off Huntington Beach. The ship made three unusual movements over two days that appear to put it over the pipeline.

In a statement to AP, Hapag-Lloyd, the shipping company that operates the Rotterdam Express, denied any role in the spill.

A U.S. official told the AP on Wednesday that the Rotterdam Express has become a focus of the spill investigation. The official cautioned the ship is only one lead being pursued in the investigation, which is in the early stages. 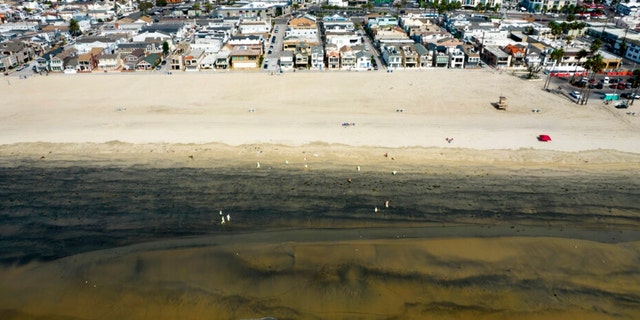 An aerial photo shows workers in protective suits clean the contaminated beach after an oil spill in Newport Beach, Calif., on Wednesday, Oct. 6, 2021. A major oil spill off the coast of Southern California fouled popular beaches and killed wildlife while crews scrambled Sunday, to contain the crude before it spread further into protected wetlands.
(AP Photo/Ringo H.W. Chiu)

The investigators are seeking to collect tracking and navigational information from the vessel that could help them identify its exact movements, the official said. They are also seeking preliminary interviews with at least some crew members.

The official could not discuss the investigation publicly and spoke to the AP on condition of anonymity.

Petty Officer Steve Strohmaier, a Coast Guard spokesperson, declined to comment on the Rotterdam Express but said the agency is analyzing electric charting systems from its vessel traffic service to see what ships were anchored or moving over the spill area.

The MarineTraffic data shows the Rotterdam Express arrived outside the Port of Long Beach early on Sept. 22 and dropped anchor about 2,000 feet (610 meters) from the pipeline.

The following day, at about 5 p.m., the data for the ship’s locator beacon indicated that while anchored it suddenly moved thousands of feet to the southeast, a track that would have taken it over the pipeline lying on the seafloor about 100 feet (30 meters) below. The ship appears to have then engaged its engines to return to its anchorage about 10 minutes later.

The ship then moved again around midnight and a third time shortly before 8 a.m. on Sept. 23, each time moving back to its assigned anchorage, according to its online location data. The Rotterdam Express remained at spot SF-3 until Sunday, when it moved into the port to unload.

The first report of oil in the water near the pipeline was made Friday evening. Amplify said the pipeline was shut down early Saturday morning but has not said how long it believes oil flowed from it.

Amplify’s CEO Martyn Willsher said Tuesday divers determined a 4,000-feet (1,219-meter) section of the pipeline was dislodged 105 feet (32 meters), bent back like the string on a bow. Oil escaped through a slender crack.

AP first contacted Hapag-Lloyd on Tuesday evening, seeking an explanation for the ship’s movements on Sept. 22 and 23.

Nils Haupt, a spokesman at its headquarters in Hamburg, Germany, denied in an email Wednesday that the ship ever moved off anchor from spot SF-3 during that period. He said the transponder data displayed by MarineTraffic is erroneous. 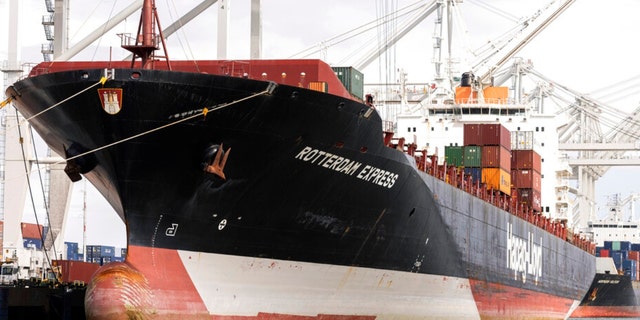 The Rotterdam Express is seen at the Port of Oakland, Wednesday, Oct. 6, 2021 in Oakland, Calif. The Rotterdam Express, a massive cargo ship made a series of unusual movements while anchored in the closest spot to a Southern California oil pipeline that ruptured and sent crude washing up on beaches, according to data collected by a marine navigation service.
(AP Photo/Josh Edelson)

“We have proof by the logbook, which is updated hourly, that the vessel did not move,” Haupt said. “MarineTraffic in this case is wrong and the position is indeed incorrect.”

Haupt said Hapag-Lloyd would cooperate with any investigation.

On Wednesday morning, AP sent an email that included a screenshot of the Rotterdam Express movements as indicated on MarineTraffic to the Unified Command Joint Information Center for state and federal agencies responding to the oil spill. Senior Chief Petty Officer Lauren Jorgensen said the command was unable to discuss matters involving an ongoing investigation.

Nikolas Xiros, a professor of marine engineering at the University of New Orleans, said it would be highly unlikely that the transponder data for a ship, which works through a global network called the Automatic Identification System, would be off by several thousand feet.

“AIS transporters are very accurate and the whole system is also very accurate,” Xiros said after reviewing the location track for Rotterdam Express. “I think probably the ship moved, that’s what I think. And with the anchor down, which was a big problem.”

Xiros, who has spent more than two decades teaching marine navigation and electronics to future ship captains and crew, said the only alternative explanation he could think of was that either someone had hacked the AIS system to make the Rotterdam Express appear to move or that the ship’s transmitter somehow became unfastened from its mast, fell in the water and drifted away before being retrieved by the crew, only to have it come unfastened two more times. 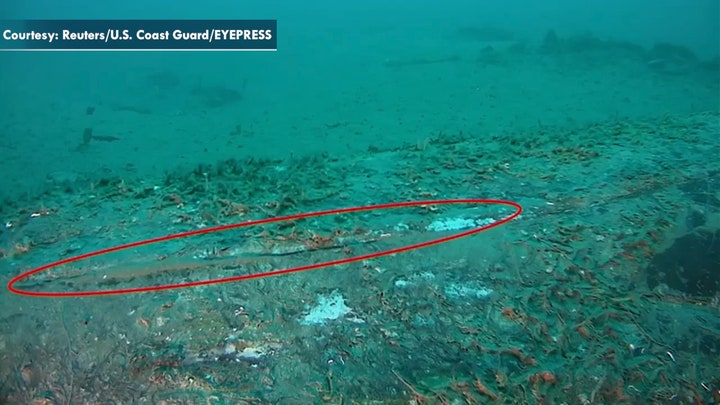 Xiros said he could provide no reasonable explanation for why the ship might have moved so far off its assigned station. Records show relatively calm weather and seas during the days in question.

“There is a series of peculiar things and all that need to be explained,” Xiros said. “It may very well be some kind of an accident, but not necessarily a human error. We will have to see. But … I think the most probable explanation is the ship with anchor down moved both back and forth and possibly caused damage to the pipeline.”

If a ship’s anchor were to become entangled with an underwater obstacle such as a communications cable or petroleum pipeline, the operator is required by federal law to notify the Coast Guard. The locations and movements of ships are also regularly monitored by both the AIS system and radar, according to the Coast Guard.

Xiros said if he were investigating the cause of the oil spill, he would seek to review the digital logs for both location and engine operations aboard the Rotterdam Express.

According to MarineTraffic data, the ship left Long Beach on Monday for the Port of Oakland, where it was moored at a dock Wednesday night.