Katherine Taliana grew up going to Salvation Army church services but, when she was 17, she lost interest in religion.

“I guess I thought I’d do life on my own,” she said. “And I got caught up in the wrong crowd.” 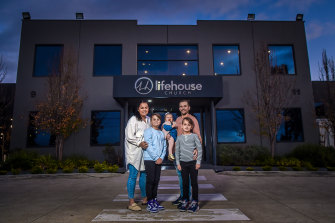 Katherine and Luke Taliana and their children Lennox, Esther and Hendrix.Credit:Justin McManus

However, at age 27, after marrying her husband, Luke, who was brought up Catholic, the couple sought the community and spiritual guidance of a church.

They wanted to raise their children with Christian values, but sought a new approach to services.

And so now, every Sunday, the family, including sons Lennox, 10, and Hendrix, eight, and daughter Esther, one, attend LifeHouse Church, a Pentecostal church in Westmeadows, in Melbourne’s north.

“My kids are happy, they love church,” she said. “I think it gives them good morals.”

The Avondale Heights family live in a statistical Bible belt.

Data from the 2021 census shows that nationally, the proportion of Christians dropped below 50 per cent for the first time.

Just 44 per cent of Australians now identify as Christian, down from 52 per cent five years earlier and 61 per cent in 2011. But the census also revealed that the trend away from Christianity is not uniform.

In one pocket of suburbs clustered around Melbourne Airport, more than two-thirds of people are Christian – the highest percentage in the city. The suburbs include Taylors Lakes, Keilor, Keilor East and Avondale Heights.

The area’s Christian component is significantly higher than Victoria’s overall – 43.8 per cent of the state’s population said they were Christian.

And while 42.1 per cent of Victorians stated they had no religion, that figure was just 17.6 per cent in Taylors Lakes and 23.3 per cent in Avondale Heights.

Peter Ward, a spokesman for the Keilor Historical Society said after World War II, with good employment and relatively cheap housing opening up, the area around the airport attracted new migrants, particularly from Italy, Greece and Malta.

He said subsequent immigrants sought to live near relatives, friends and compatriots.

Demographer Glenn Capuano from .id consulting said that, depending on residents’ countries of origin, more multicultural suburbs often have higher levels of religious faith than those where more people are Australian or British-born.

In Avondale Heights, Taliana, 35, who is of Spanish and German descent and whose husband is of Maltese heritage, said as well as the Ten Commandments, her church teaches her children to help those in need.

They’re taught “to love people for what they are, whether they’re married, divorced, gay or lesbian”.

In addition, she says,“Jesus is the hope of the world and I want my kids to live in hope and not have fear, and to know they have someone they can talk to, and they’ve got a Father in heaven.”

Loretta Bufalino of Airport West, a suburb the census identifies as 64.5 per cent Christian, said that although she doesn’t go to church, she indicated she was Catholic in the census. Her four daughters, aged eight months to six years, will go to Catholic schools, at least in primary school.

Bufalino, the daughter of Italian immigrants, likes being a part of that community. “I think especially for Italians, religion is part of their identity,” she said.

Iraqi refugee Doris Haweil, 43, of Keilor, is keen to raise her three sons, aged 13 to 20, as Assyrian Orthodox Christians, and the family, including husband Alfred, go to church in Coolaroo.

She said her faith is “very important” to her, as it was in Iraq: it’s somewhere she can speak Assyrian, pray and catch up with friends.