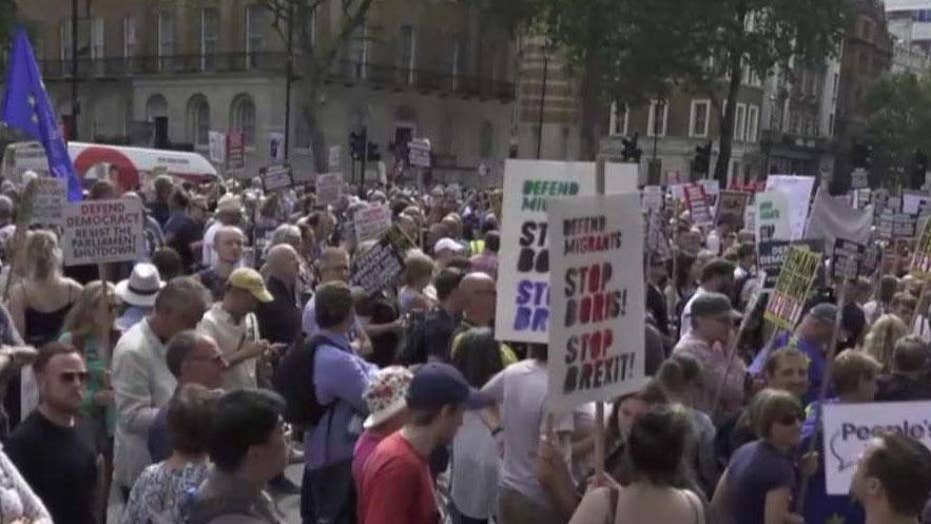 The Heritage Foundation’s Nile Gardiner says Prime Minister Boris Johnson is prepared to do whatever is necessary to deliver Brexit.

The British Parliament erupted into chaos as Prime Minister Boris Johnson followed through with his threat to suspend the legislature over Brexit Monday night.

Amid the heightened tensions, members of Parliament attempted to prevent House of Commons Speaker John Bercow from leaving the chamber – a ceremonial gesture which signifies that parliament is closed – by pinning him to his chair.

“I held onto his leg I think it was and others held onto his arms,” Lloyd Russell-Moyle, a Labour/Coop MP for Kemptown and Peacehaven, told the Independent in the early hours of Tuesday morning. “We took a symbolic protest to say to Speaker Bercow ‘no we don’t want you to go’ and held him in place temporarily.”

The protest failed, and Bercow was able to leave the chamber to go to the House of Lords to complete the suspension – or prorogation – formalities.

As Conservatives – members of Johnson’s party – left the chamber with Bercow, others chanted “Shame on You!” while they remained inside in protest, holding signs reading “Silenced.” One of those signs was left on Bercow’s char after he departed.

“We held up signs which said ‘Silenced’ because we believe parliament is being silenced,” Clive Lewis, of the Labour Party, told the Independent. 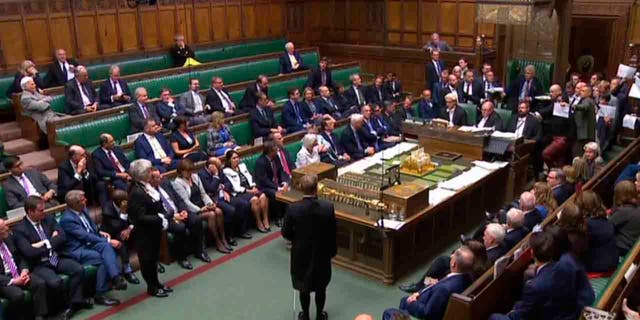 In this image made from video, British lawmakers stage a protest in the House of Commons before prorogation of Parliament, in London, Tuesday Sept. 10, 2019. The British government has formally suspended Parliament, sending lawmakers home for five weeks amid a Brexit crisis. (Parliament TV via PA via AP)

Parliament is suspended for five weeks – until Oct. 14 – a drastic move that gives Johnson a respite from rebellious lawmakers as he plots his next move regarding Brexit.

Opponents have accused the prime minister of trying to avoid democratic scrutiny.

Ahead of the suspension, Bercow had expressed his displeasure, saying: “This is not a standard or normal prorogation.

“It’s one of the longest for decades and it represents an act of executive fiat."

Conservatives in the chamber condemned Bercow’s behavior, saying he was “openly taking sides.”

“Speaker loses plot at the end of Parliament. Openly takes sides. Very sad,” Bob Seely tweeted. “Fear he has lost respect from many. I hope he has not damaged impartiality that survived generations. Pathetic stunt from Labour too. We need a General Election.”

The prime minister has had a turbulent week since Parliament returned from its summer break on Sept. 3. He kicked 21 lawmakers out of the Conservative group in Parliament after they sided with the opposition, and saw two ministers quit his government — one of them his own brother.

Parliament's suspension ended a day of blows to the embattled Johnson. First an opposition-backed measure designed to stop Britain from crashing out of the EU on Oct. 31 without a divorce deal became law after receiving the formal assent of Queen Elizabeth II. The law compels the government to ask the EU for a three-month delay if no deal has been agreed by Oct. 19.

Johnson says the country's delayed exit must happen at the end of October, with or without a divorce agreement to smooth the way. But many lawmakers fear a no-deal Brexit would be economically devastating and are determined to stop him.

"I will not ask for another delay," Johnson said. But he has few easy ways out of it. His options — all of them extreme — include disobeying the law, which could land him in court or even prison, and resigning so that someone else would have to ask for a delay.

It is the first time in more than 70 years a British government has suspended Parliament when faced with opposition.

Meanwhile, Bercow, whose control of business in the House of Commons has made him a central player in the Brexit drama, announced he would step down after a decade in the job.

The colorful speaker, famous for his loud ties and even louder cries of "Order!" during raucous debates, told lawmakers he will quit the same day Britain is due to leave the EU, Oct. 31. 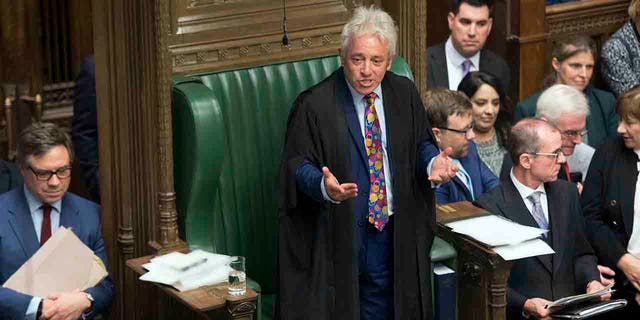 Throughout the three years since Britain voted to leave the EU, Bercow has angered the Conservative government by repeatedly allowing lawmakers to seize control of Parliament's agenda to steer the course of Brexit.

He said he was simply fulfilling his role of being the "backbenchers' backstop" and letting Parliament have its say.

"Throughout my time as speaker, I have sought to increase the relative authority of this legislature, for which I will make absolutely no apology," he said.