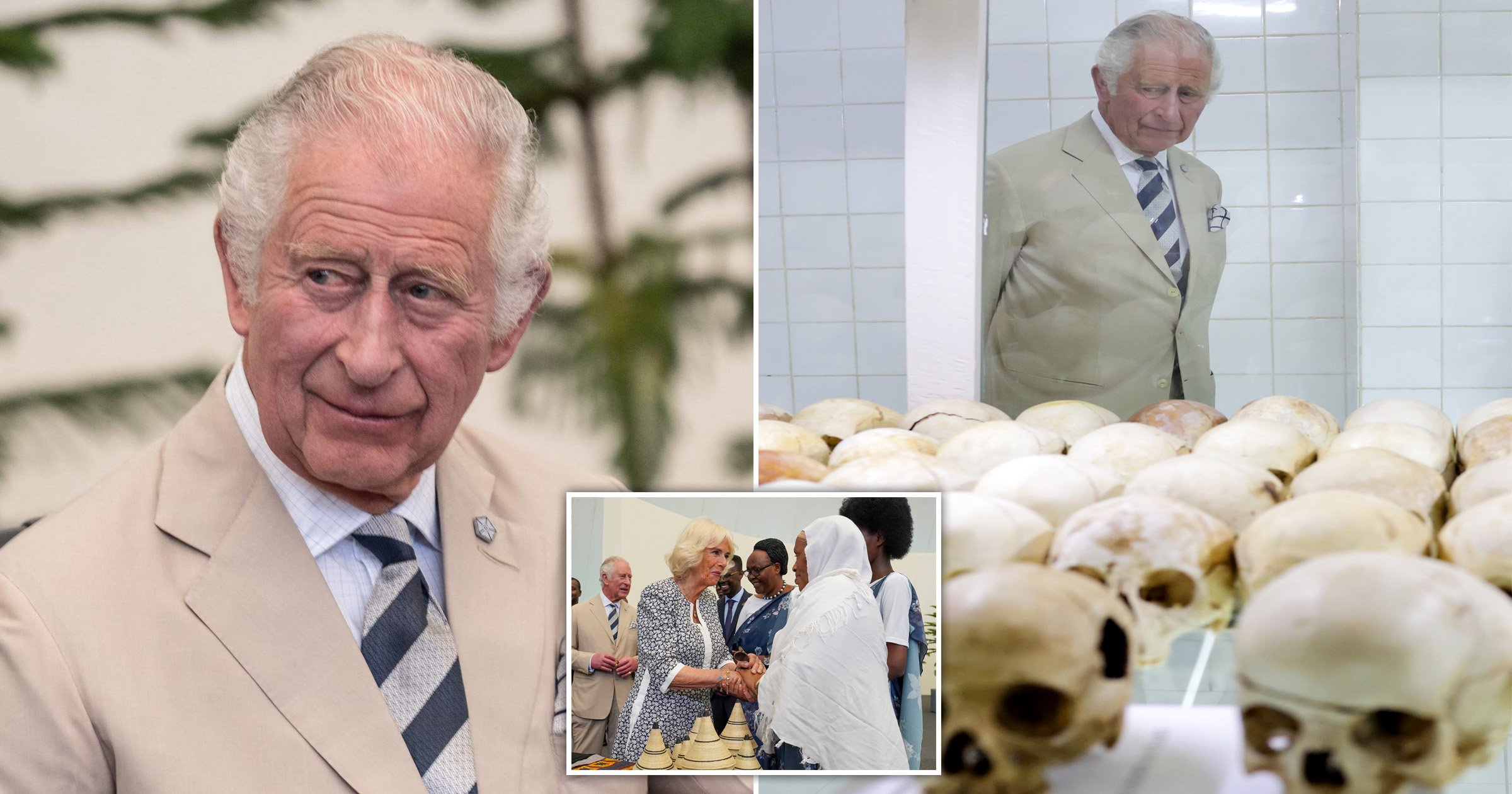 The Prince of Wales came face-to-face with a grim legacy of the Rwandan genocide as he urged the world never to repeat the horrors of the atrocity.

Charles stared at rows of skulls from victims of the 1994 atrocity during a visit to a mass grave earlier today.

He and his wife Camilla dedicated the day to attending events recognising the trauma of survivors and hearing the stories of whose who lost their lives.

The heir to the throne said ‘this must never happen again, we shall continue to remember’, as he visited the Nyamata Church Genocide Memorial.

In the space of just two days, more than 10,000 people were murdered inside the church building during the genocide against the Tutsi people.

Earlier, Charles and Camilla toured the Kigali Genocide Memorial and were shown the personal testimonies of families who donated pictures of smiling children and listed touching personal details about their loved ones.

The couple read intently the comments about the youngsters murdered and Charles reacted by saying: ‘Terrible, happens all too often’. Camilla lamented ‘what humans can do to humans’.

The duchess bonded with one survivor of the genocide during her visit, when she was hugged by Uzamukunda Walida, who was gang raped but now openly discusses her experience.

In 1994, hundreds of thousands of members of the Tutsi community were slaughtered in Rwanda by ethnic Hutu extremists.

The Nyamata Church Genocide Memorial, south of the Rwandan capital Kigali, contains the remains of more than 45,000 people killed in the church compound and the wider area between April 7 and May 14 in 1994.

In total 800,000 people, including three quarters of the country’s minority Tutsi population, died during 100 days of slaughter in Rwanda that year.

Charles heard how the militiamen killed Tutsi men outside the church who were trying to protect their families before turning on the women and children sheltering inside.

‘They threw hand grenades in and then shot and hacked many of them to death,’ said Rachel Murekatete, the memorial manager, who showed Charles around and pointed out hundreds of holes in the church’s wooden roof caused by shrapnel from the blasts.

Downstairs in a basement the prince was shown glass cases containing the skulls and bones of victims who had been burnt after being shot or hacked to death with machetes.

At the memorial in the capital, Charles and the wife Camilla had laid a wreath in memory of the victims, and outside the church, an hour’s drive from Kigali, he left another floral tribute and a handwritten message in the national Kinyarwanda language.

He said: ‘We will always remember the innocent souls that were killed in the genocide against the Tutsi in April 1994. Be strong Rwanda. Charles.’

Speaking afterwards, Ms Murekatete said the prince had appeared moved by what he had seen.

She added: ‘He said, ‘this must never happen again, we shall continue to remember.’

Later Charles, who during the day met Rwandan President Paul Kagame with his wife, hailed a reconciliation village as a ‘wonderful example to the rest of the world’ after hearing how survivors and perpetrators of the 1994 genocide live side by side.

He toured the Mbyo village, built in 2005, where 384 Tutsis and Hutus successfully live and work together, and now the project has seen eight more created across the country to encourage unity and help those who lived through the atrocity to move on.

After listening to the stories of one Hutu perpetrator and one Tutsi, whose entire family was killed, he said he was ‘full of admiration’ that they had managed to overcome the past, adding: ‘It must have been so difficult to be able to forgive these quite awful horrors.

‘It’s been enormously heartening to hear how now you view the situation entirely as Rwandans, rather than Tutsi and Hutu, and it is a wonderful example I think to the rest of the world.’

Among those who greeted him at the village was Eric Murangwa, a former footballer who narrowly escaped death during the genocide, and who encouraged Charles to visit the memorial and reconciliation village when they met in Scotland in April.

Charles, representing the Queen, touched down in Rwanda with Camilla yesterday for the Commonwealth Heads of Government Meeting (Chogm).

It is the first to take place since 2018 having been postponed by the Covid-19 pandemic.

Boris Johnson will potentially have an awkward meeting with Charles, who earlier this month reportedly said the UK’s scheme to send asylum seekers to the east African country is ‘appalling’.