Santiago: The Chilean government is keeping close tabs on a large fleet of Chinese fishing vessels that has stirred up controversy further north along the Pacific coast of South America, Foreign Minister Andres Allamand said on Thursday.

Allamand said Chile´s Defense Ministry and Navy were monitoring the advance of the fleet in order to protect the "sovereignty" of the country´s exclusive economic zone. 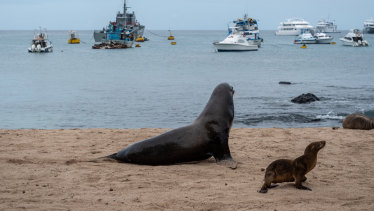 Sea lions on a beach in front of fishing and tourist boats on San Cristobal, Galapagos Islands, Ecuador. The country complained about Chinese vessels overfishing in its vicinity.Credit:Getty Images

The fleet consists of some 300 ships that frequent the Pacific Ocean, often around Peruvian waters, Allamand said.

The boats, previously fishing for giant squid near the Galapagos Islands off Ecuador, angered the domestic fishing industry in Peru last month and sparked a Twitter war between Washington and Beijing.

The US Embassy in Lima said in September the Chinese vessels had a history of avoiding tracking and seemed to "be dumping plastic" pollutants. The Chinese embassy responded that it attached great importance to protecting the environment and the ocean.

"We hope that the Peruvian public is not deceived by false information," it said on Twitter. 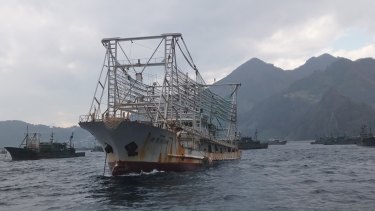 Chile´s foreign minister said that Chilean officials had not made contact with the Chinese government. He said the fleet includes private ships "and some that may have some connection with the state."

Chile´s long Pacific coastline offers an abundance of fish and shellfish, a critical source of income for fishermen in communities throughout the country.