Chinese President Xi Jinping has urged his marine soldiers to focus on getting ready for war during a visit to a military base in southern China.

He told his Navy troops yesterday to ‘focus all [your] minds and energy on preparing for war and maintain a high level of alert’, reported state broadcaster CCTV, citing the leader.

Xi’s call for combat readiness comes as political tensions have flared between China and self-ruled Taiwan, which Beijing considers as its own. 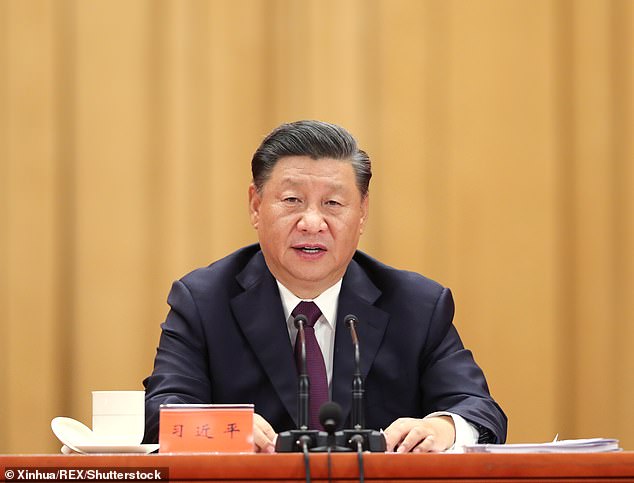 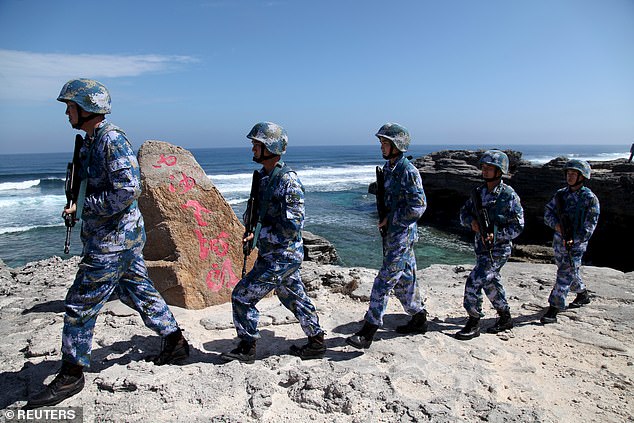 Xi’s call for combat readiness comes as political tensions have flared between China and Taiwan. In this file photo taken on January 26, 2016, a group of soldiers from China’s People’s Liberation Army (PLA) Navy patrol at Woody Island in the Paracel Archipelago

The Communist leader has been touring the southern Chinese region since Monday. He is taking part in celebrations to mark the 40th anniversary of the Shenzhen special economic zone today.

While visiting the marine base, Xi urged the soldiers to ‘speed up improving [their combat capabilities]’ in order to become a ‘multi-functional, rapid response, all-weather and region’ elite force.

He also told the troops to focus on war preparedness while remaining highly vigilant, according to CCTV.

‘Focus all [your] minds and energy on preparing for war and maintain a high level of alert,’ Xi, who is also chairman of China’s Central Military Commission, is quoted saying.

The Chinese leader also said that the Navy shouldered the important duties of ‘safeguarding the country’s sovereignty security and marine interests’. 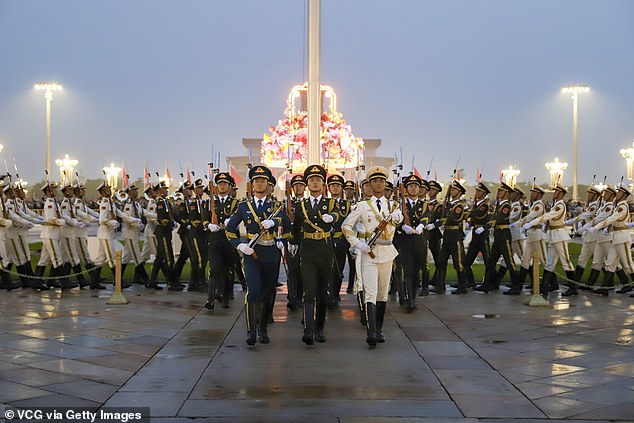 Carrie Lam, pro-Beijing leader of Hong Kong, attended the ceremony, after announcing on Monday that she was postponing an annual policy address scheduled for that day, as did Ho Iat Seng, the chief executive of Macau.

Xi’s speech also called for further exchanges between the two territories and Taiwan, as well as overseas Chinese, and to ‘strengthen their sense of belonging with the motherland.’

The news comes after Taiwan-China tensions spiked over the weekend when China threatened to take over Taiwan by conducting live-fire military drill of ‘soldiers seizing an island’. 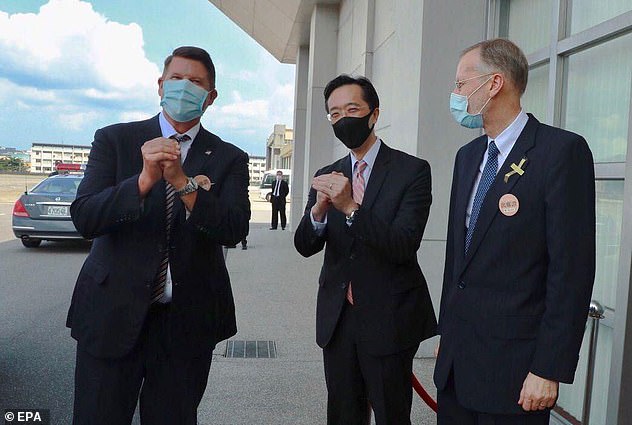 Washington’s increased outreach to Taiwan under President Donald Trump has become yet another flashpoint with Beijing. A photo shows US Under Secretary of State for Economic Affairs Keith Krach (left) gesturing before his departure from Taiwan on September 19

On Sunday, Beijing also aired a purported confession from a Taiwanese businessman who is held captive by Chinese authorities on spying charges.

The Communist government has ratcheted up pressure on the democratic island since the 2016 election of President Tsai Ing-wen, who rejects its view that Taiwan is part of ‘one China’.

Washington’s increased outreach to Taiwan under President Donald Trump has become yet another flashpoint with Beijing, as the US and China clash over a range of trade and security issues, as well as the coronavirus pandemic.

Last month, China released a propaganda video showing nuclear-capable bombers carrying out a simulated attack on what appears to be the US Andersen Air Force Base on the Pacific island of Guam.

Dramatic footage with solemn music released by the Chinese military shows H-6 bombers taking off from a desert base as pilots fired off ballistic missiles at an unidentified seaside runway, triggering a massive explosion.