China’s Solomons deal is a clear setback for Australia

The signing of a security agreement between China and the Solomon Islands should be seen as what it is: a significant tactical win for Beijing in an ongoing competition for strategic influence in the Pacific.

The contest has a long course left to run, and there will likely be further wins and losses along the way. But it has been a clear setback for Australia, and it highlights that a business-as-usual approach to the region is no longer enough. 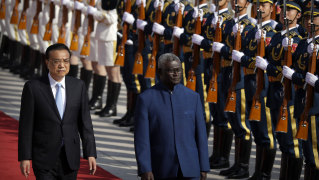 Whoever wins the coming federal election, the next Australian government will need to do much more to embrace the Pacific Island countries, while working methodically with its allies to identify and address other points of potential exposure across the region.

All is not necessarily lost in the Solomon Islands itself, but Australia will need to draw heavily on its diplomatic toolkit as it works to reduce the chances of the new agreement being executed in the way that our strategic experts fear – to establish a Chinese base for military supply and the rotation of troops.

In the Solomons, as in every country of the region, this will require a systematic approach to further enhance Australia’s position in each “domain” of the relationship – covering both the political elite and the broader public and key sectors from civil society to business and development.

A serious assessment of where further vulnerabilities may lie across the Pacific will be required of Australia’s diplomats and intelligence officials. It’s no doubt underway. Consideration of where China has been increasing its influence in recent times provides some clues.

Kiribati is a case in point – the Micronesian country joined the Solomon Islands in 2019 in switching recognition from Tapei to Beijing and signing onto China’s Belt and Road Initiative. Like the Solomon Islands, Kiribati had been promised significant financial aid. China had also managed to secure the support of the country’s President, Taneti Maamau, just as it won the backing of Prime Minister Sogavare in the Solomons.

News emerged last year that China was supporting the Kiribati government with a feasibility study for an airfield upgrade on remote Kanton atoll, at the strategic mid-point between the East Asian and American coastlines. The local opposition expressed alarm, and the Kiribati government insisted that this project aimed only to boost transport links and tourism. As in the Solomon Islands, it is possible that the authorities genuinely believe that Beijing’ intentions are benign.

Vanuatu, directly south of the Solomon Islands in the Melanesian chain, is one of Beijing’s most significant debtors in the region. Concessional Chinese loans support transport and other infrastructure there. Vanuatu also has solid links with Australia, which remains the largest provider of grant aid, but there have been tense periods in the relationship over time. Ni-Vanuatu political figures can be very quick to rise if they feel that the nation’s sovereignty is being disrespected.

Vanuatu attracted headlines in 2018 amidst speculation that a Chinese-funded wharf had been developed with the option of converting it to military use. More persistent concerns have been expressed about the local authorities’ willingness to follow Beijing’s lead in its approach to local media freedoms.

A Vanuatu-based journalist was barred from re-entering the country in 2019 after reporting on the secret deportation of Chinese citizens escorted by the Chinese police. Meanwhile, media executives and journalists are courted assiduously by the Chinese authorities, who put public outlets under significant pressure to carry content. This pattern is reproduced elsewhere in the region.

The “information war” underway in the Pacific is essentially a battle between two value systems, and it deserves serious attention from any incoming Australian government.

China has reportedly spent about $9 billion since 2009 strengthening its worldwide media presence. It assumed control of Radio Australia’s Pacific shortwave frequencies when the ABC service was shut down in 2017. China’s national television service is steadily expanding its broadcasting services across the region and Australia’s equivalent, the ABC Australia service, is described by many as a sadly depleted version of what it once was.

Papua New Guinea, the largest country in the region, has been heavy going for China. Its business interests have been frustrated as they have tried to build influence among the political elite, and Australia has managed to counter its campaign to control the sensitive telecommunications sector. China is a relatively small donor and lender in PNG. But the ever-widening expectation gap between the national government and the people of Bougainville about their troubled region’s future status could lead to tensions that might be manipulated by China. A scenario in which Bougainville lost patience and declared independence could create significant opportunities.

Australia’s rich network of links across the Pacific provide a firm basis to work on, but if there is one lesson from the agreement between Honiara and Beijing, it is to avoid becoming self-satisfied.

Until recently, there was almost a sense that Australia’s position in the Solomon Islands was unassailable – it had, after all, led the highly successful regional assistance mission to stabilise the country following the conflict of the early 2000s, and was the first to be called on to help when violence returned to the country last year. The scale of Australia’s grant aid dwarfs that of any other, including China’s – just as it does across the rest of the region.

But aid programs do not buy influence – that comes only with the patient nurturing of relationships and trust. And to focus on the size of Australia’s development assistance is to ignore these countries’ aspirations. Most Pacific governments would rather focus on economic integration and market access in talking about the relationship with Australia – areas where they feel they can be on more of an equal footing.

Equally, Australia should not convince itself that, with the comparatively significant resources it deploys in the region, it should try to do this on its own. Success will require an even more integrated approach with like-minded allies including Japan, the United States and even France, and it will need to draw on the voices of the several Pacific countries that share Australia’s concerns. Many regional leaders understand that there are dangers for their fragile nations in Beijing’s hunger for resources, its growing military engagement across the region, and the scale of its lending patterns.

In all this, Australia will also need to work harder to avoid the impression that its focus on the region has been motivated only by an impulse to counter China’s reach. There have been some mis-steps here. Several regional figures expressed concern after the AUKUS announcement about what they saw as a lack of forewarning and the impact of growing strategic competition.

The easiest way of convincing the Pacific that Australia really cares is by signalling clearly its concerns about climate change. The Pacific countries could not have made it any more clear that this is what they see as their overriding, existential challenge. The coalition government’s measures to support climate change resilience and renewable energy projects in the region have been drowned out by an entrenched regional view that Australia is a laggard on this issue.

Ian Kemish is a former Australian High Commissioner to PNG.