A Chinese man nearly died after allegedly inserting a wiggling 8-inch eel into his backside to treat his constipation.

The live fish bit through the man’s colon before getting stuck in his abdomen, doctors said.

The unnamed patient claimed he decided to use the creature to solve his bowel problems after following a folk remedy.

Doctors operated to remove the eel, which was still alive, but warned the man he could have died from hemolysis – when red blood cells are destroyed – caused when bacteria from the large intestine reaches the abdomen.

The news came to light after the man sought medical attention at a hospital in Xinghua, East China’s Jiangsu Province, for severe abdominal pain. 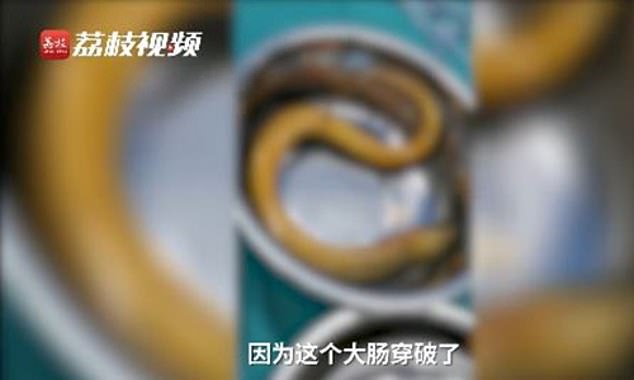 He initially avoided seeking medical attention for the pain because he was ‘shy’, the Global Times reported.

There is no scientific evidence to support the folk remedy the man was following.

Another Chinese man, said to be in his 50s, followed the folk remedy last year, inserting a 16-inch eel into his rectum.

The live fish tore through the man’s intestines before dying and getting stuck in his abdomen for a week.

The news came to light after the man sought medical attention at the Huangjiang Hospital in Dongguan, Guangdong province, due to severe abdominal pain.

Doctors removed the fish in emergency surgery and said the man’s organ had been severely infected and filled with waste matter.

The man was treated in intensive care for three days before being discharged.

Also last year, a man got a 10-inch chopstick lodged in his belly after inserting it into his backside ‘out of curiosity’.

The 68-year-old man from Hubei claimed that he was interested in checking his backside after developing piles.

The patient was discharged from the hospital in late May after medics removed the metal stick from the pensioner’s intestines.