Clippers believe short-term patience will pay off in long run 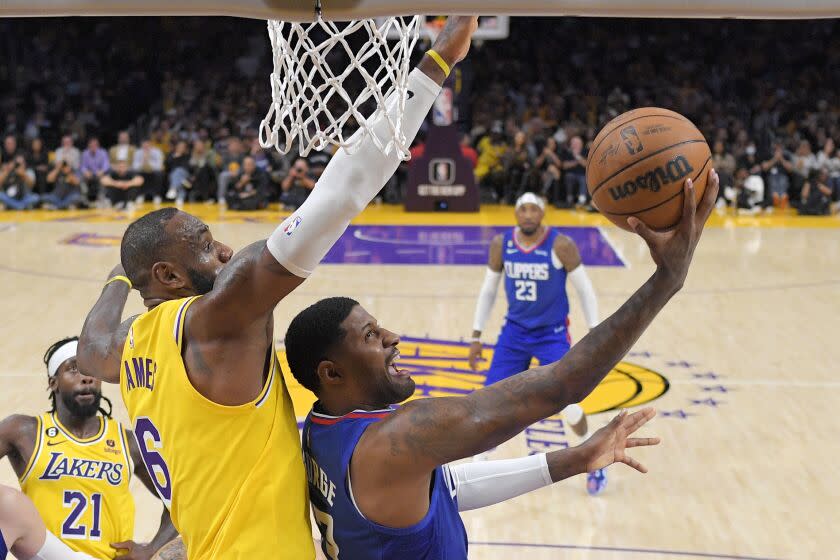 By tipoff Thursday night, the Clippers were the last NBA team to start their season. They hope to be the last team standing at the end, too.

Coach Tyronn Lue, a self-described basketball junkie, didn’t mind camping in front of the TV on Tuesday and Wednesday as the rest of the league began their schedules. More difficult, he said, will be studying his own team to find the right lineups and roles to ensure the Clippers’ two-track season goals are being met: How they can reach their ultimate goal of playing their best basketball in the postseason, while in the short-term keeping pace in a rugged Western Conference as the team slowly ramps up the minutes for several players, including Kawhi Leonard.

Leonard came off the bench for the first time in nine years, playing 21 minutes in Thursday’s season-opening win against the Lakers, and at several points before tipoff Lue referenced a “plan” the team had to navigate his usage in the season’s early weeks. Until the All-Star wing and his surgically repaired right knee can physically and consistently handle a starter’s workload — Lue described a target of around 33-35 minutes a game — the grand plan of how this team will play come the postseason might only be glimpsed in bursts of a few minutes here and there as Lue manages jumbled lineups.

The Clippers (1-0) made clear Thursday they know their aim is not to be like one of the sports cars that fills their players’ parking lot, starting the season at full speed, but a proverbial 18-wheeler that takes time to gain speed but is hard to stop when it does.

The Clippers’ depth allowed them to make Leonard their 11th man into the game while still building a 12-point advantage by the time he checked in with 6 minutes 25 seconds before halftime. His fellow reserves included John Wall, the former No. 1 overall pick whose career assist average ranks seventh-best all-time; and Luke Kennard, the most accurate three-point shooter in the NBA last season.

To Leonard, the Clippers’ 22 lineups against the Lakers showed a “stacked team” and a reminder that he can take his time.

“It was just about recovery,” Leonard said of coming off the bench, “making sure I stay healthy in the long run, making sure my body stays warm and I’m not sitting on the bench as long.”

Lue prefers to coach by feel, and in a preseason survey NBA general managers again called him the best coach at making in-game adjustments. For the time being, however, his lineups will be influenced as much by hard data as his own instincts, with the Clippers looking at different markers to gauge how strenuously players such as Leonard are working during their stints on the court. The hardest part of his job, Lue acknowledged Thursday, will be the lineup logistics he’ll juggle from quarter to quarter, or game to game. To wit: The team ruled Leonard and Wall out for Saturday’s game in Sacramento to give them rest.

A lineup might have “a great flow going,” Lue said, “and then you gotta get guys out.”

It could be the case that the Clippers are uniquely prepared to absorb the difficulties that come with jumbled lineups and night-to-night inconsistencies with minutes. Nine players from the 2021 Western Conference finals run are still part of the rotation.

Yet there are enough new contributors, from Wall to Norman Powell, who started in Leonard’s place, that the full roster is far from in sync. As a point guard, Wall likes to asks teammates where they prefer getting the ball and their favorite plays, but he acknowledged having little time so far to put that knowledge into practice.

“It’s kind of hard, trying different rotations,” Wall said. “And we tried a lot of different ones throughout practice and training camp. But just to gut the win out, those guys [Lakers] made a run. We made a run.”

Lue called it a “nasty game, for real,” as he watched his team’s 16-point first-half lead evaporate. Last season, there were only 21 instances in which a team committed 22 or more turnovers while making nine or fewer three-pointers — as the Clippers did Thursday — and they had a 4-17 record.

There is a belief that the wait to see that plan come together completely will be worth it.

“We’ve all been there and whatever, averaged 20 points, been on teams that just didn’t go nowhere,” Leonard said. “In your career, you just want a chance to win — well, I do every year — and that’s the goal for everybody.

Update: The Kings (0-1) haven’t played since surrendering a 10-point lead in Wednesday’s loss to Portland. The Clippers in the past have complimented the “Bugatti speed” of Kings guard De’Aaron Fox, but he turned heads in the opener mostly with his five-of-nine three-point shooting and 33 points.