The supermarket staples that are FALLING in price: Bargain hunters should snap up crispbreads, mackerel and sweet chilli sauce

Many groceries are racing ahead of the current rate of 9% inflation, but others are falling in price according to some consumer groups — providing opportunities for nifty deal finders.

Comparison website Trolley said a small number of products became cheaper over the past year rather than going up in price like most foodstuffs.

Mackerel has fallen in price by 7.3 per cent since 2021, while sweet chilli sauce now costs 6 per cent less and tuna chunks are 2.6 per cent cheaper.

Chocolate oranges were also 4.4 per cent less expensive than they were a year ago, as were crispbreads — showing a 7.8 per cent decrease since May 2021 — with sprinkles down 5.3 per cent, tomatoes down 0.8 per cent and biscuit bars 4.6 per cent cheaper. 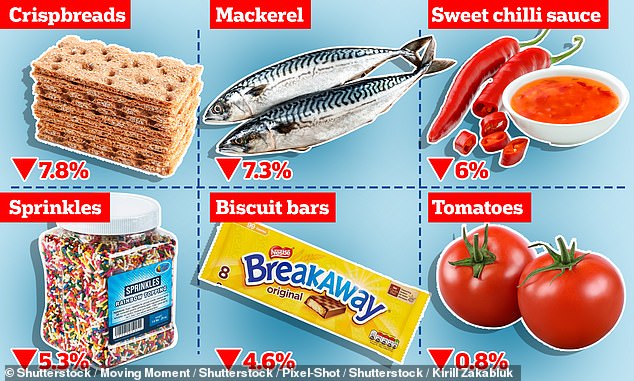 Although there are some outliers, the general trend has been to more expensive foodstuffs across the UK.

Some groceries have risen in price by more than 20 per cent between December 2021 and February 2022, found UK consumer group Which?

Fizzy drinks had the biggest price rises at 5.85 per cent on average, followed by butters and spreads at 4.9% per cent, energy drinks at 4.8% per cent and milk by 4.6% per cent.

The study said inflation across 21,000 groceries was 3.14 per cent on average, whereas market analysis group Kantar said food inflation was at 5.9 per cent in April. 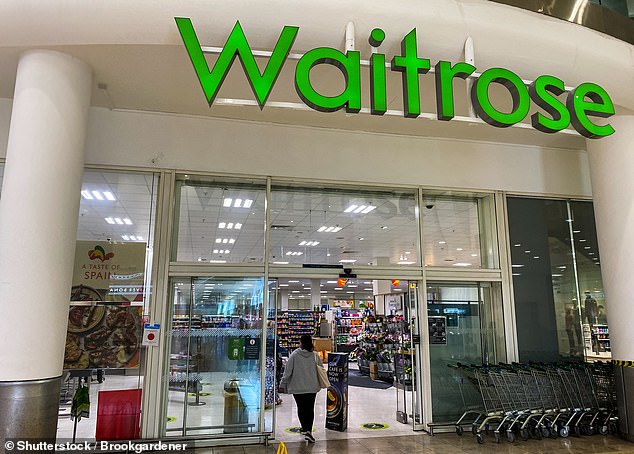 Consumer group Which? reported that inflation had been the least severe at Waitrose at 1.61%

Supermarkets are also cutting back on discounts and promotions, said the report, as well as cutting product sizes while charging the same amount in a process known as ‘shrinkflation’.

A multipack of Walkers classic variety crisps was cut from 24 bags to 22 at Tesco, Asda, and Morrisons last autumn, but the price stayed the same.

The amount of instant coffee in a Nescafé Azera Americano decaff shrank from 100g to 90g in Tesco in February, but the price stayed at £5.49.

The Bank of England predicts inflation will peak at 10% later in 2022, but some experts — including former central bank officials — are more skeptical.

Economists have compared Britain’s dismal economic inflation forecast to the harsh economic atmosphere of the 1970s, under Thatcher’s Britain.

Between 1950 and 1970, the price of a pint was nearly four times more expensive across the two decades — the cost of a beer followed a similar price increase over the twenty years between 2000 and 2020.

But between 1970 and 1990, the price of a pint had risen almost tenfold. Should a pint of beer in the UK follow the trajectory across the next few decades as it did in the 70s, one pint in a UK pub could cost around £50 by 2040.