Washington: US House Speaker Nancy Pelosi says there's no deal yet on a new coronavirus relief package as Democrats wait to see whether the Trump administration will agree to the terms.

Pelosi spoke a day after President Donald Trump tweeted, from hospital, his support for more stimulus legislation, writing, "WORK TOGETHER AND GET IT DONE".

Pelosi was asked on CBS News' Face the Nation if the President's comment suggested that a deal was in hand or close. 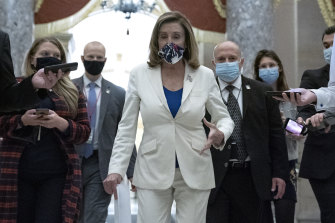 "No, it means that we want to see that they will agree on what we need to do to crush the virus so that we can open the economy and open our schools safely," Pelosi said.

She did not elaborate, but had said on Friday that agreeing on language on how to spend new testing and tracing money remained a sticking point. Democrats have pushed for months for a national testing strategy that the administration never produced.

Pelosi has suggested that Trump's positive COVID-19 diagnosis could change the dynamic and help speed an agreement in the new round of economic relief talks that restarted about a week ago between her and Treasury Secretary Steven Mnuchin.

Negotiations continued over the weekend, but there was little sign a breakthrough would be imminent. Pelosi has asked airlines to hold off standing down tens of thousands of workers pending a deal. United and American, the major carriers that have threatened furloughs, have said they can reverse them if there is a deal to extend payroll support for the industry that just expired, but Congress must act fast.

"What I said to the airline executives in a public statement is: Don't fire people; you know that relief is on the way and it will be retroactive, so let's keep them employed," Pelosi said on Sunday.

As to whether a deal could come together in the coming week, Pelosi said: "It just depends on if they understand what we have to do to crush the virus. You can't just say we need to do something but we're going to let the virus run free. Now it's even run free in the White House."

Pelosi herself tested negative for COVID-19 on Friday. She said on Sunday that she would continue to get tested regularly, a step she had not previously committed to publicly.

House members left Washington on Friday for what was supposed to be a recess through to the election, but if a deal does emerge, they could be called back to vote on it. Moderate House Democrats in tough races are pushing hardest for a deal, and helped prod Pelosi to re-engage in talks with Mnuchin. Their negotiations had broken down in early August.

Congress has not enacted any new relief since the four packages passed in March and April totalling about $US3 trillion ($4.1 trillion).

The House passed a $US3.4 trillion bill called the Heroes Act in May, but Senate Republicans and the White House dismissed it as overly costly, objecting to nearly $US1 trillion for state and local governments.

Pelosi subsequently scaled back the bill to $US2.2 trillion, largely by shortening the time frame of the initiatives, reducing the state and local aid portion to $US436 billion. Republicans still say it's too high, but the House passed the $US2.2 trillion version late on Thursday over united Republican opposition.

Mnuchin's offer to Pelosi in the new round of talks was about $US1.6 billion. The two sides agree on another round of $US1200 stimulus checks but have remained apart on other issues, including tax credits for children and families and enhanced unemployment benefits. Pelosi wanted to renew $US600 in additional weekly benefits, but the administration offered only $US400 per week.

The new talks come amid worrying signs for the economy, which was propped up by the stimulus over the spring but has since started to slow by some measures. A cascade of new lay-offs was announced last week, including by Disney and Allstate. The total number of people claiming unemployment rose slightly, to 26.5 million for the week ending September 12.

Our weekly newsletter will deliver expert analysis of the race to the White House from our US correspondent Matthew Knott. Sign up for the Herald‘s newsletter here, The Age‘s here, Brisbane Times‘ here and WAtoday‘s here.