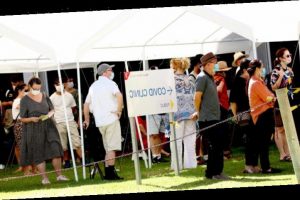 Scientists fear COVID-19 variant is ‘taking the edge off’ vaccines

My colleague Liam Mannix reports this morning that vaccine manufacturer AstraZeneca is awaiting fresh data on its ability to combat a new COVID-19 variant after clinical trials for rival inoculations showed reduced effectiveness against the emerging South African strain.

A spokeswoman for AstraZeneca said the company is waiting for studies on the vaccine’s effectiveness against the variant to be published, probably next week.

All four current COVID-19 vaccines (from AstraZeneca, Pfizer, Novavax and Johnson & Johnson) use different technologies but have an identical core component – a piece of the virus’ spike protein they try to generate an immune response to.

Pfizer’s vaccine was approved for use in Australia in January, and 53.8 million doses of AstraZeneca’s vaccine have been bought and will be distributed over coming months.

The South African variant of the virus has been picked up eight times in Australia.

“It is hard to say for sure, but you would think there is the potential they would also be reduced,” said Associate Professor Corey Smith, head of translational and human immunology at the QIMR Berghofer Medical Research Institute.

He said the results suggested the virus could mutate in ways that made antibodies and vaccines less effective. “But I don’t think that’s a real surprise,” he said. “Viruses always mutate.”

Professor David Tscharke, head of the department of immunology and infectious diseases at the Australian National University, said it was always likely that “we will have to chase variants by changing our vaccines”.

But that’s better than no vaccines at all, he said.

What do the new variants of COVID-19 mean for us?

First up this morning, let’s look at variants and vaccines.

Shortly after we celebrated the good news late last year that several COVID-19 vaccine candidates had performed well in clinical trials, we started reading reports that mutations of the virus had been detected overseas.

First, B.1.1.7 was linked to a sharp rise in cases in Britain. That more virulent variant later escaped hotel quarantine in both Brisbane and Perth, leading to snap lockdowns.

Meanwhile, South Africa and Brazil are both facing rising cases from two other variants known as N501Y.V2 and P.1 respectively, which led to international arrival caps being reduced further in some Australian states.

It’s perfectly normal for a virus to mutate over time, but the speed at which these mutations occurred and the new variants spread has scientists concerned. It also raises several crucial questions: What effect will these new variants have on the pandemic? Will Australia face another outbreak? Are the new variants more deadly? Will the vaccines work on them? Science reporter Liam Mannix explains what we’re up against.

On that last question, limited early data seems to indicate the variants may reduce the efficacy of the vaccines.

Last week, the Novavax jab was found to have 89.3 per cent efficacy in clinical trials but that dropped to 49 per cent for the South African variant.

However, experts have stressed two key points: 1. research is ongoing into the variants, including vaccine booster shots to increase protection; and 2. having a vaccine with reduced efficacy is far better than having no vaccine at all.

Prime Minister Scott Morrison reiterated yesterday that everyone will be offered a vaccine by October. For more on the vaccine rollout plan, including where you are in the queue, read our explainer.

In Western Australia, a large swathe of the state’s south-west, including metropolitan Perth, is entering its second day of a five-day hard lockdown.

The lockdown was triggered when a security guard working in the hotel quarantine system tested positive for the highly infectious UK strain of the coronavirus.

Anyone from the three WA local government areas in lockdown (metropolitan Perth, Peel and South West) are barred from travelling to Vitoria, Queensland, Tasmania and the Northern Territory.

But NSW has instead issued a Public Health Order placing travellers from WA under the same stay-at-home restrictions they would have faced had they stayed in WA.

“NSW has a standing policy of keeping our borders open, and that’s what we’ll continue to do.” NSW Premier Gladys Berejiklian said yesterday.

No additional cases have emerged in WA so far but criticism of its hotel quarantine system has.

There have been reports that the infected security guard had a second job, as a share-ride driver, and that WA has only just brought in daily testing for people working in its quarantine system.

Dr Andrew Miller, president of the WA branch of the Australian Medical Association, described the state’s hotel quarantine system as “amateur” and more.

“We want professional quarantine facilities, not something that’s been shoe-horned into a Sheraton,” Dr Miller said.

“WA is starting to look like a bit of an arrogant team who are in the lead at three-quarter time and now we’re getting a bit of a kicking.”

A returned overseas traveller in hotel quarantine in Perth has also described seeing staff at the hotel wearing the wrong PPE, wearing it incorrectly, and said the air in the hotel was being recirculated, a factor that Queensland health authorities believe could have been behind the spread of the virus in one of is quarantine hotels in January.

The report from the inquiry into the Queensland quarantine hotel outbreak is expected this week.

Good morning and welcome to our live coverage of the coronavirus crisis in Australia on this Tuesday.

I’m Marissa Calligeros and I will be helming the blog for the start of the day before handing over to my colleagues at WA Today.