London: Leading British figures have called on Prime Minister Liz Truss to stand down after less than six weeks in the job, as the Conservative government braces itself for a further week of infighting following the chaos caused by now dumped mini-budget measures.

Truss, who is fighting for her career after she was forced to reverse several economic policies, including scrapping the 45 per cent income tax bracket and axing a planned rise in corporate rates, will appeal to moderate Tory MPs to save her premiership after it was reported that powerbrokers had held secret discussions about ousting her and arranging a “coronation”. 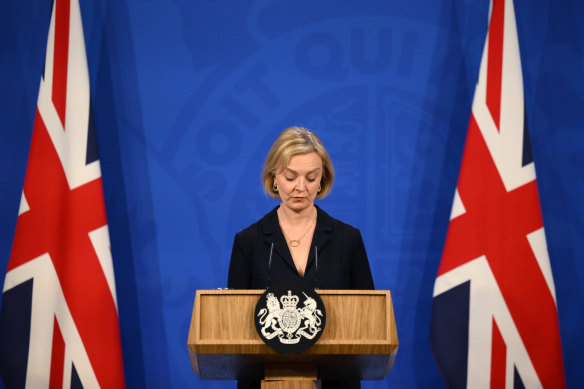 MPs are demanding a change to the party’s constitution that would mean grassroots members would be out of the selection process for a new leader, in a bid to avoid another protracted contest.

Truss, who was appointed by the late Queen on September 6, will address the faction known as the “One Nation” group of centrist Conservatives, following a weekend in which three of her MPs called on her to quit and her new chancellor tore up the agenda on which she was elected by party members.

Downing Street was braced for further market turbulence on Monday, after Friday’s sell-off when investors warned that Truss’ attempt to reassure them by scrapping £18 billion ($32.5 billion) in corporate tax cuts was not enough.

Goldman Sachs cut its forecast for Britain’s economic growth and warned that it now expected a more significant recession following the U-turn on corporate tax, while Bank of England governor Andrew Bailey told an audience in Washington on Saturday (US time) that “inflationary pressures” meant a “stronger response” could be needed from the central bank than thought in August.

The next rate rise decision is on November 3, days after the strife-ridden Truss government is due to lay out its updated economic plans.

The bank launched a dramatic £65-billion emergency intervention into bond markets last month as it warned of “material risk” to Britain’s stability and pension markets amid the chaos that has sent government borrowing costs soaring and compounds sky-high inflation.

While Truss has an uphill battle to halt momentum swinging towards candidates such as her one-time leadership rivals Rishi Sunak and Penny Mordaunt, the mood in Westminster is likely to be shaped as much by the behaviour of the financial markets.

Stuart Rose, former head of British department store M&S and chairman of supermarket chain Asda, told the Financial Times that Truss had lost the confidence of business and investors.

“She is a busted flush,” he told the newspaper. “As prime minister, you have to have the confidence of business, investors, the electorate and colleagues in the party. She has none of these.”

Guy Hands, founder of private equity firm Terra Firma, told the paper that Truss “should go as soon as possible”.

He said: “A grown-up needs to take over the Conservative leadership and be a prime minister who represents everyone in Britain … that person needs to do this soon, before the lights go out irreversibly on this once great nation.”

On Sunday, Tory MPs Crispin Blunt, Andrew Bridgen and Jamie Wallis all publicly called for Truss to go. Bridgen told The Telegraph, “We cannot carry on like this. Our country, its people and our party deserve better.”

George Osborne, the former Tory chancellor, predicted the prime minister would be ousted by Christmas, telling Channel Four, “She is Pino, Prime Minister In Name Only, at the moment.”

Jeremy Hunt, who became Britain’s new chancellor after Truss sacked her one-time close ally Kwasi Kwarteng after just 38 days, insisted that she was still running the government after reports suggested he was preparing to scrap further parts of her “mini”-budget.

Kwarteng has reportedly privately told friends he believes Truss will last in her post only a week.

Hunt told the BBC on Sunday that “the prime minister’s in charge”, adding that Truss could be trusted because “she’s changed, she’s been willing to do that most difficult thing in politics, which is to change tack”.