Married council worker, 43, who pretended he was a BA pilot on dating app Bumble to woo a mother before posing as a masseuse and sexually assaulting her in her own home is facing jail 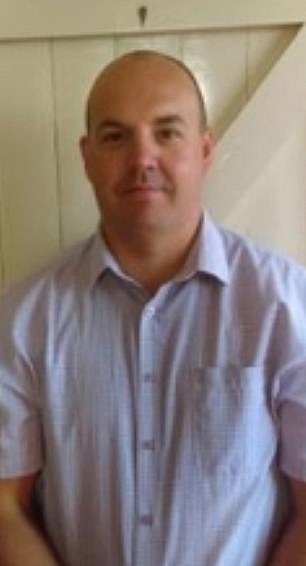 A mother has told how a married council worker posed as a British Airways pilot and a masseuse on dating app Bumble before he sexually assaulted her.

Balding Peter Ferguson, of Great Horkesley, near Colchester, Essex, took photos of a stranger from Facebook to create the fake persona and then tricked his way into her home.

The 43-year-old pretended to be a BA captain called Matt, and after meeting on Bumble, they communicated using WhatsApp over a period of two weeks – but he said he couldn’t meet because of a hectic work schedule.

Ferguson then posed as a masseuse sent by the pilot to her home to give her a massage after she had told the captain that she had aching muscles following a gym session.

He asked the 35-year-old to strip off naked at her home in Colchester, and there he sexually assaulted her twice.

Ferguson is now facing jail after he was convicted by a jury of sexual assault by penetration and sexual assault after a trial at Chelmsford Crown Court.

As he awaits sentence in June, the victim, who cannot be named for legal reasons, told how his con was ‘clever and calculated.’

She said: ‘I want other women to know how dangerous online dating can be.’

She said: ‘He claimed to be flying BA passenger jets all over the world, but really he was working for the local council. 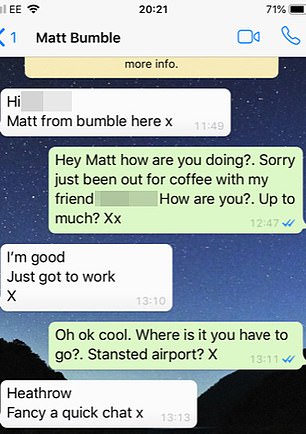 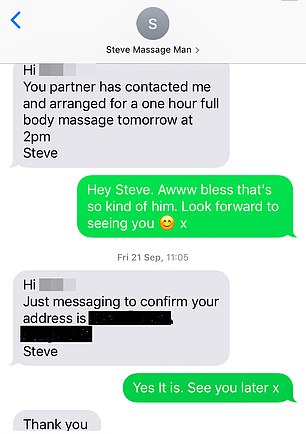 Ferguson pretended to be a BA captain called Matt, and after meeting on Bumble, they communicated using WhatsApp (left) over a period of two weeks. Pictured right: A message from Ferguson, claiming to be ‘Steve’ the masseuse arranging to visit her house

‘He blamed his flight schedule (for not meeting in person). He’d tell me he was en-route to Heathrow, or on a lay-over in Bangladesh.

‘He seemed totally genuine and I was keen to meet, but he never seemed to have the time.’

The duo were chatting by phone when the woman told Ferguson – posing as Matt – how a tough gym session had left her with aching muscles.

She said: ‘He said he had a friend who was a masseuse and offered to pay for him to come to my house, as a treat.

‘I didn’t want to appear ungrateful so I accepted, and not long after I had a text from someone called Steve confirming the booking.’ 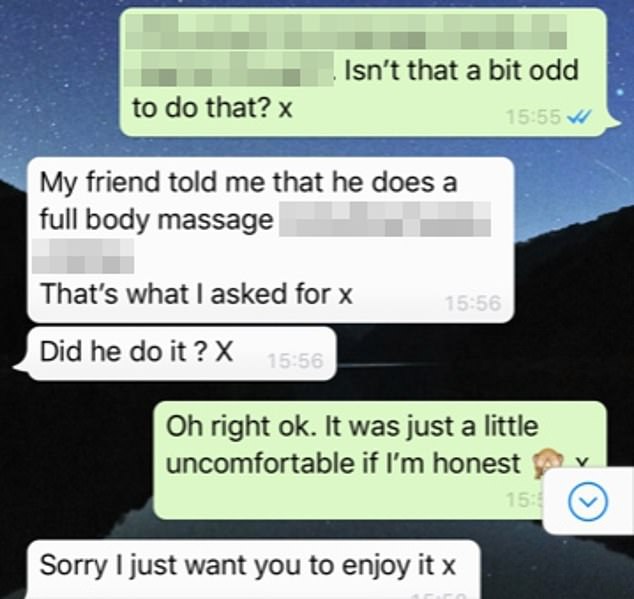 The WhatsApp conversation continued after the attack (pictured)

‘Steve’ turned up at her home one afternoon when her son was at school.

She said: ‘He didn’t have a massage table or much in the way of equipment – just a couple of towels and some baby oil.

‘He said he used clients’ beds and – as I’d never had a massage before – I went along with it.

‘I stripped naked, and had a towel covering my lower half. He started massaging my back, but he didn’t really seem to know what he was doing.

‘He wasn’t getting to any of the knots in my shoulders, it felt like he was just rubbing baby oil in.’

‘Steve’ asked the woman to turn on to her back and massaged her breasts and legs.

He then sexually assaulted her.

She said: ‘I didn’t feel at all comfortable with it and told him so. But then he did it again. I jumped up, pulled a towel around me, and told him to stop.

‘Alarm bells were ringing because he had a deep and husky voice just like Matt, and even used similar phrases.

‘He brushed it off saying they must have similar accents.’

Soon after ‘Steve’ left her home, the woman voiced her concerns to ‘Matt’, who said he had booked her a full body massage.

She confided in pals who advised her she had been sexually assaulted.

‘But I Googled the number from Steve’s text and it came up with a result for a Colchester Borough Council webpage.

‘The number belonged to a team leader called Peter Ferguson who was responsible for things like fly-tipping and littering.

‘And I recognised Peter’s photo instantly – it was the guy who’d visited my house as Steve the masseuse.’

The woman contacted police and Ferguson was arrested the same day.

Chelmsford Crown Court heard during his trial that he had secretly joined hook-up site Fab Swingers after difficulties in his family life.

He had used a photo of himself – but no one was interested.

He invented ‘Matt the pilot’ and lifted photos of a handsome stranger from Facebook for his fake Bumble profile, then used his work phone to pretend to be Steve.

Colchester Borough Council said in a statement: ‘Peter Ferguson is no longer employed by us.’