Barnageddon! Couple hits out after their rural home is blighted by huge farm building put up by neighbour 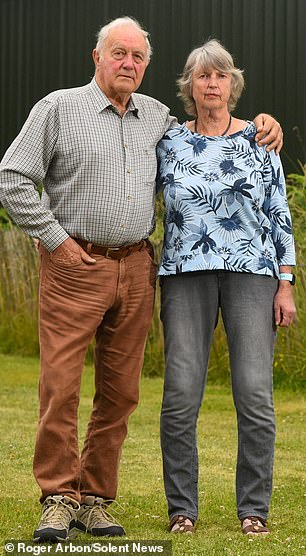 Dave and Di Jesinger have been left horrified by a barn-like ‘monstrosity’ put up just yards from their living room windows in the village of West Wellow, Hampshire

For 50 years Dave and Di Jesinger had enjoyed the views of a large open field filled with wildlife from their New Forest home.

And as the seasons rolled by, the 77-year-olds saw no reason why they could not enjoy their rural idyll until the end of their days.

But now the couple have been left horrified by a barn-like ‘monstrosity’ put up just yards from their living room windows in the village of West Wellow, Hampshire.

The massive corrugated steel building was built by their neighbour, eminent cardiologist Iain Simpson, using a loophole in planning rules.

The Jesingers, who are now ‘forced to live with the blinds closed’, said the only warning they received was when Mr Simpson called the night before construction began in May. But they claim he gave no details about the building.

So the couple were horrified when the 44ft long, 25ft wide and 15ft high ‘monstrosity’ was erected on the other side of their garden fence.

The couple say the structure next to their £700,000 three-bedroom bungalow is so overbearing they are considering leaving their home of 50 years.

Locals say they have never had any problems with Mr Simpson, 61, or his wife Nancy and are at a loss as to why a doctor would build a structure in such an ‘intrusive’ location.

Mr Jesinger, a retired mathematician at a research laboratory, complained to the authorities but was told nothing could be done as a loophole means no planning permission is needed for agricultural buildings. 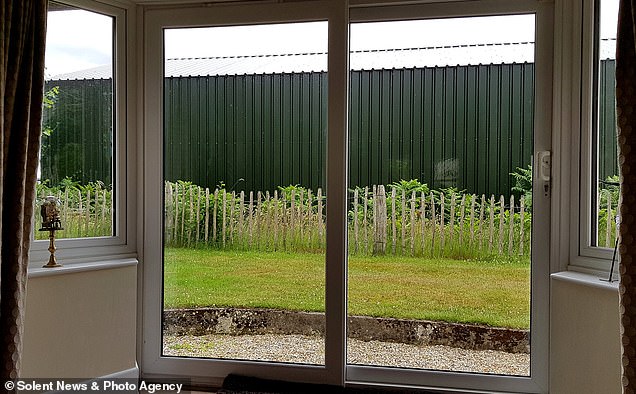 The Jesingers, who are now ‘forced to live with the blinds closed’, said the only warning they received was when Mr Simpson called the night before construction began in May. The view from the couple’s living room is now blocked by the new building, seen above before and after

He said: ‘People in the village are talking about starting a petition to get rid of it – they all think it is a monstrosity. You hear about people building things like this to get around planning applications.’

Mr Jesinger added: ‘We are worried about the value of our house now. It is our children’s problem really because they will get less inheritance. But it was our intention to stay here until we die. Now, we are looking at selling it. We love this place and this has destroyed the concept of our home.’

The couple said they were shocked it was possible to build such an imposing building without permission and warned: ‘If you live near to designated agricultural land, it can happen to you without any warning.

‘We are in total disbelief. We used to have a lovely view, we could keep an eye on the birds and the nature – now we are forced to live with the blinds closed.’

Roger Ravenscroft, 76, who lives across the road, said: ‘It’s unsightly, it’s horrible and not keeping with the neighbourhood.’

The prior notification application for the building was submitted to New Forest National Park Authority last year by farmer Tim Bunch, who has occasionally worked on the field. It is not known why Mr Bunch submitted it rather than the Simpsons.

Mr Simpson refused to comment on the building which has remained unused since it went up in June. 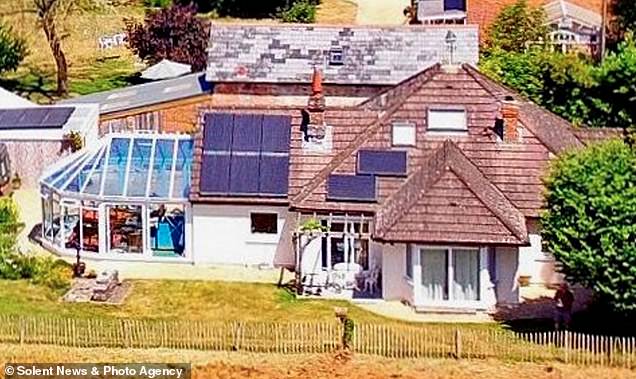 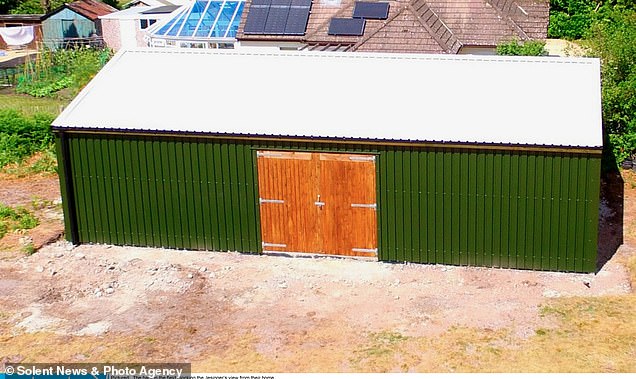 The couple moved into their £700,000 bungalow 50 years ago. The building was put up yards from their living room. Their house is seen above before and after