Home » World News » ‘Credible threat’ is behind U.S. sending carrier to the Gulf

‘Credible threat’ is behind U.S. sending carrier to the Gulf

‘Credible threat’ is behind U.S. sending the Abraham Lincoln carrier battlegroup AND a bomber strike force to the Persian Gulf, says Pentagon chief

The U.S. dispatched an aircraft carrier battle group to the Persian Gulf region due to a ‘credible threat’ from Iranian regime forces, the Pentagon said Monday.

And the U.S. is vowing to hold Tehran responsible for any actions carried out by its ‘proxies’ – including Hezbollah.

Acting Pentagon chief Patrick Shanahan said he approved the deployment of the USS Abraham Lincoln carrier strike group to unspecified waters in the vicinity of Iran in response to ‘indications of a credible threat by Iranian regime forces.’

The nation’s top diplomat warned: ‘If these actions take place, if they do by some third-party proxy, a militia group, Hezbollah, we will hold the Iranian leadership directly accountable for that.’ 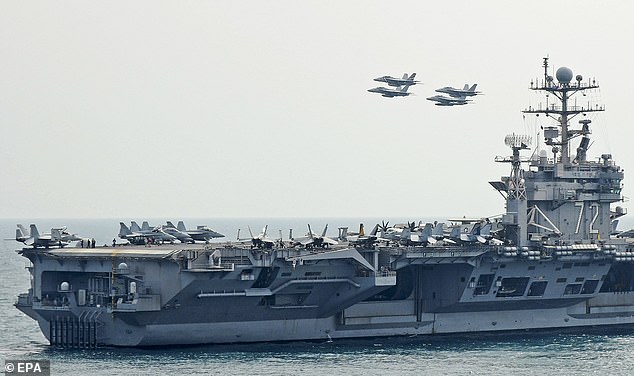 The United States says it is deploying the USS Abraham Lincoln, seen here with F/A-18F Super Hornets, in response to ‘escalatory indications’ from Iran 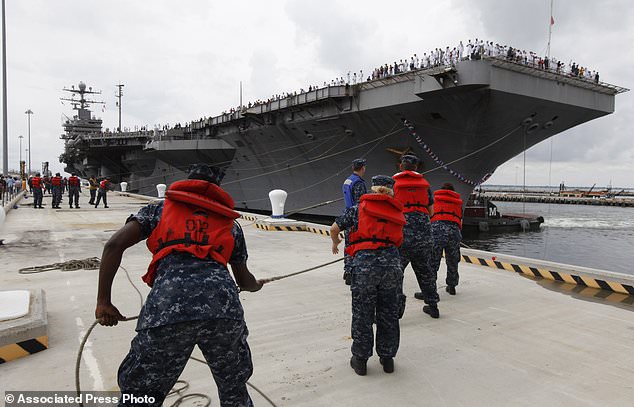 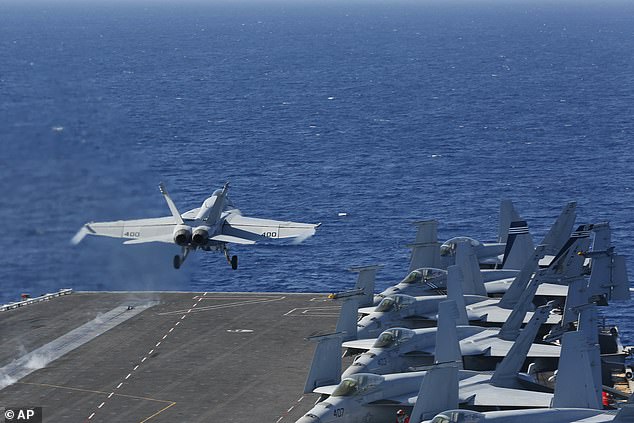 In this May 3, 2019 photo released by the U.S. Navy, An F/A-18E Super Hornet from VFA 25 launches from the flight deck of the Nimitz-class aircraft carrier USS Abraham Lincoln 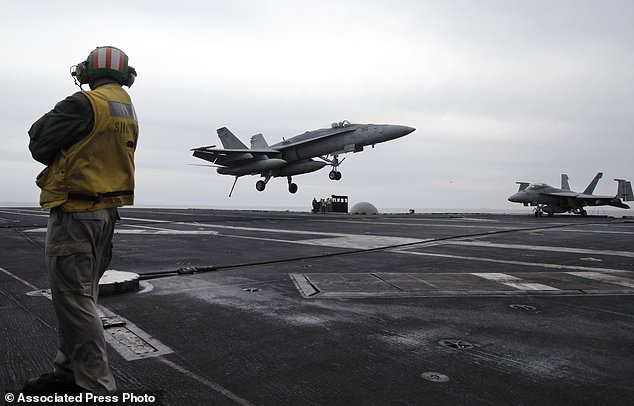 The Pentagon is dispatching the USS Abraham Lincoln and other military resources to the Middle East following ‘clear indications’ that Iran and its proxy forces were preparing to possibly attack U.S. forces in the region, according to a defense official 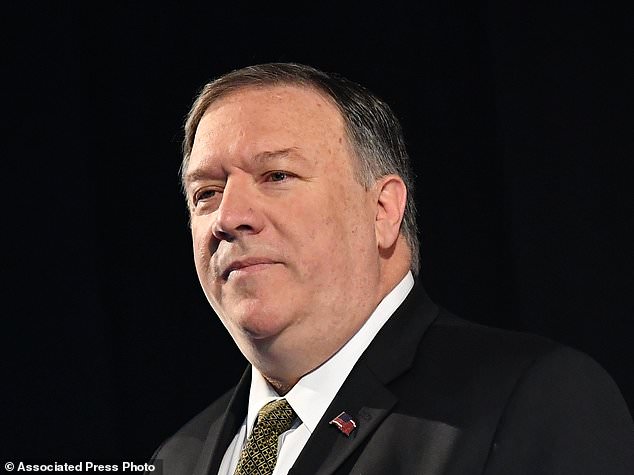 ‘It is absolutely the case that we have seen escalatory actions from the Iranians,’ said Secretary of State Mike Pompeo

Pompeo, traveling in Finland, added: “Our objective is to get the Islamic Republic of Iran to behave like a normal nation. When they do that, we will welcome them back.’

Fears of conflict rose Monday as the administration vowed to send a message by deploying an aircraft carrier strike group, amid a report that Tehran would scale back its commitments under a nuclear deal after mounting pressure by President Donald Trump.

The deployment was first announced late Sunday by John Bolton, Trump’s national security advisor, who said the move was ‘a clear and unmistakable message to the Iranian regime that any attack on United States interests or on those of our allies will be met with unrelenting force.’

According to Bolton: ‘In response to a number of troubling and escalatory indications and warnings, the United States is deploying the USS Abraham Lincoln Carrier Strike Group and a bomber task force to the U.S. Central Command region to send a clear and unmistakable message to the Iranian regime that any attack on United States interests or on those of our allies will be met with unrelenting force.’

Bolton, a longtime Iran hawk, continued: ‘The United States is not seeking war with the Iranian regime, but we are fully prepared to respond to any attack, whether by proxy, the Islamic Revolutionary Guard Corps, or regular Iranian forces.’

U.S. officials did not give more details on the alleged threat and the Pentagon had already announced in April that the USS Abraham Lincoln had headed on a ‘regularly scheduled deployment’ out of its base in Norfolk, Virginia. 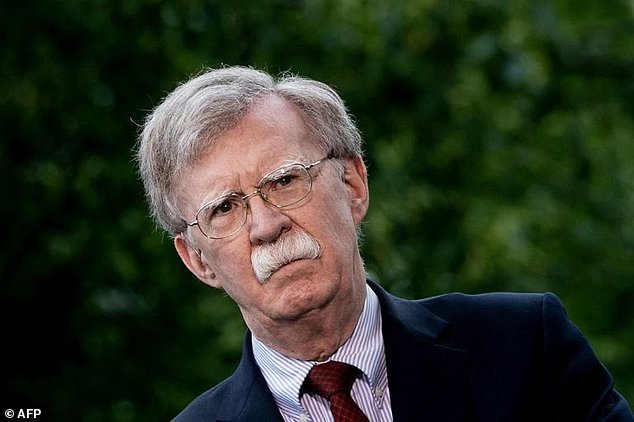 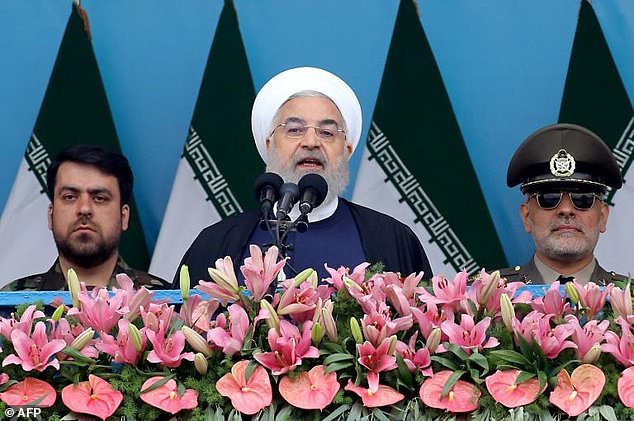 The news site Axios said Bolton’s warning came after Israel, which has pushed to isolate Iran, passed along intelligence of a possible plot by Tehran ‘against a US target in the Gulf or US allies like Saudi Arabia or the UAE.’

Quoting an unnamed Israeli official, Axios said the intelligence was ‘not very specific at this stage’ but that the ‘Iranian temperature is on the rise’ due to pressure.

Mark Dubowitz, chief executive of the Foundation for Defense of Democracies, which advocates a hard line on Iran, said he had heard of a ‘spike’ in intelligence in recent days about planned attacks.

He believed Iran had given the green-light to Islamist movements Hamas and Islamic Jihad to fire missiles into Israel in a weekend flare-up.

The strikes sought ‘to tie down Israeli forces and create a crisis to distract the US and Israel from IRGC plans elsewhere,’ he said, referring to Iran’s elite Revolutionary Guards.

Other observers were much more skeptical of the intentions of Bolton, who advocated attacking Iran and enjoyed close ties to the country’s formerly armed opposition before Trump hired him.

The deployment announcement came almost a year to the day after Trump pulled the United States out of a multinational accord under which Tehran drastically scaled back its sensitive nuclear work. 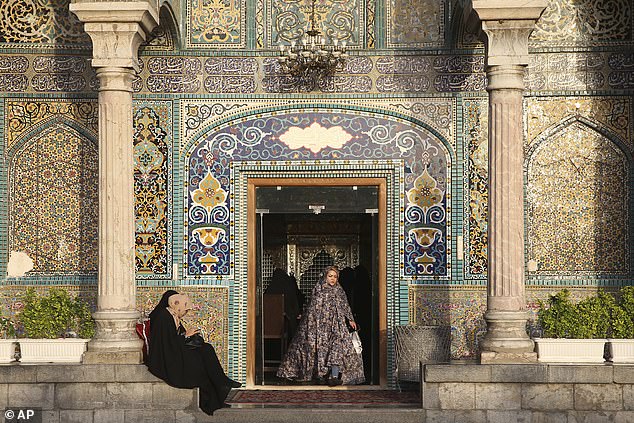 Iranians visit the shrine of the Shiite Saint Imam Abdulazim in Shahr-e-Ray prior to the month of Ramadan, south of Tehran, Iran, Sunday, May 5, 2019

‘I think this is manufactured by Bolton to try to justify the administration’s very harsh policy toward Iran despite the fact that Iran has been complying with the nuclear deal,’ said Barbara Slavin, the director of the Future of Iran Initiative at the Atlantic Council think tank.

‘Given Bolton’s record,’ she said, ‘I wouldn’t put it past him to try to manufacture a crisis here.’

With frustration mounting in Iran over the lack of dividends from the nuclear accord, the semi-official ISNA news agency said that President Hassan Rouhani would announce ‘retaliatory measures’ on Wednesday to mark the anniversary of the US pullout.

The news agency said that Rouhani would invoke sections of the accord under which Iran can cease some or all of its commitments if other parties fail to adhere to their part, notably on ending sanctions.

The Trump administration instead has imposed sweeping sanctions on Tehran and in recent weeks has hit even harder, moving to ban all countries from buying Iran’s oil, its top export, and declaring the Revolutionary Guards to be a terrorist group — the first such designation of a unit of a foreign government.

UN inspectors say that Iran has remained in compliance with the nuclear deal, which is still backed by European powers as well as Trump’s Democratic rivals seeking to unseat him next year.

Britain, France and Germany have set up a special payments system to let European businesses operate in Iran and avoid US sanctions, although few firms have been willing to incur Washington’s wrath.