In 1963, Michael Walsh’s mother answered a newspaper advert for the position of volunteer scorer for Essendon Cricket Club.

She felt it was the perfect hobby for her 14-year-old son, and so it has proved to be. 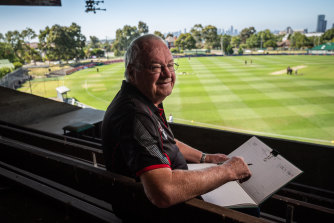 Michael Walsh, a scorer with Essendon Cricket Club for 58 years has been given an OAM in the Australia Day Honours.Credit:Scott McNaughton

Mr Walsh, now 73, of Keilor East, is among several cricket scorers who have been awarded the Medal of the Order of Australia in this year’s Australia Day Honours.

Mr Walsh said he has loved spending Saturdays watching matches and feeling a part of the team, and he had the concentration needed to record every ball and run.

It’s a labour of love that he’s carried out every summer for 58 years, also scoring for the Victorian, Australian and Big Bash League teams.

“I’d be probably lost on Saturdays in summer without having to go to the cricket, to be honest,” he said.

He said the OAM, “for service to cricket”, was a “quite an honour”.

Other scorers to be appointed OAMs include Janet Howard, a scorer with Ringwood Cricket Club since 1975, and Kevin O’Neill, a Carlton Cricket Club scorer since 1971.