Ex-Labour home secretary David Blunkett has said Jeremy Corbyn needs to sack his top aides in order to save the party from collapsing.

Blunkett has called on trade unions as well as grassroots Labour movement Momentum to stop the party from ‘imploding’.

It comes as the Labour party faced backlash in recent weeks, following its lacklustre performance in the European elections, its handling of antisemitism and the controversial decision to expel Alastair Campbell.

Blunkett, 71, has said the party has a confusing stance on Europe and stated that it needed to clarify its position, and to stamp out so-called ‘incompetence’ at the top. 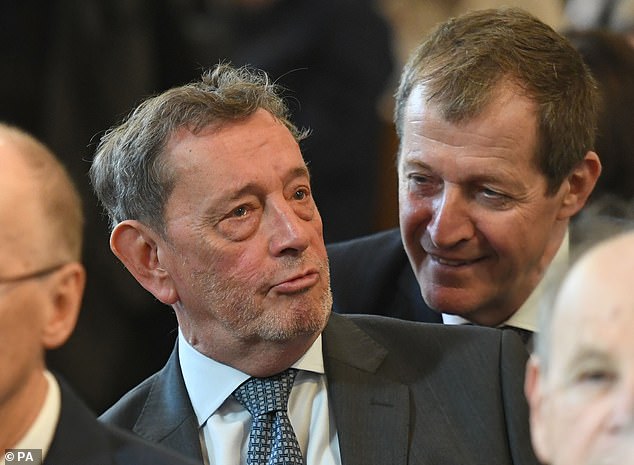 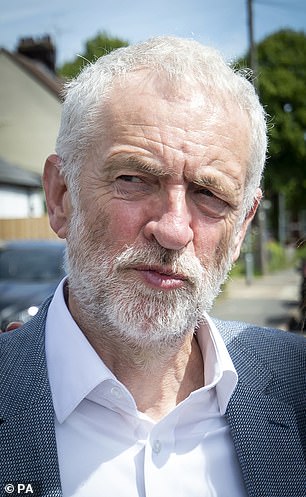 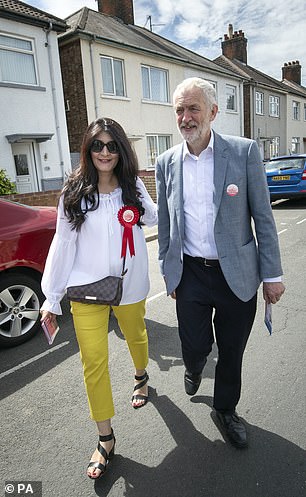 Jeremy Corbyn (pictured left) has been told that he needs to sack his top aides. He was pictured with councillor Shabina Qayyum (right) this week where he outlined Labour’s ‘key values’

‘Together with Jeremy Corbyn himself, Seumas Milne [his director of strategy], Karie Murphy [chief of staff] and the leader of Unite, Len McCluskey, must surely be held to account for the direction Labour has taken.’

‘In my view there are two forces within the Labour movement – the unions and Momentum – who must now act to get rid of those key advisers who are a block on policy changes and who are responsible for the incompetence we are seeing.

‘The major unions have historically played a key role in the stability of the Labour party, taking difficult and sometimes painful action when failure had to be dealt with. This is such a moment.’

This is while a spokesperson for Labour said that this attack ‘needs to be seen for what it is’.

‘An attempt to weaken and undermine Jeremy Corbyn by people who know they are unable to oust him and are prepared to damage the Labour party in the process.’

This is while the backlash following the European elections continued to plague the party with David Martin, who lost his seat in Scotland, leaving the Labour with no Scottish MEPs, highlighted that Corbyn needs to change policy on Brexit or make Labour a remain party.

Speaking to the Observer he said that unless Corbyn ordered the change, Labour would be ‘wiped out in Scotland and in other parts of the country’. 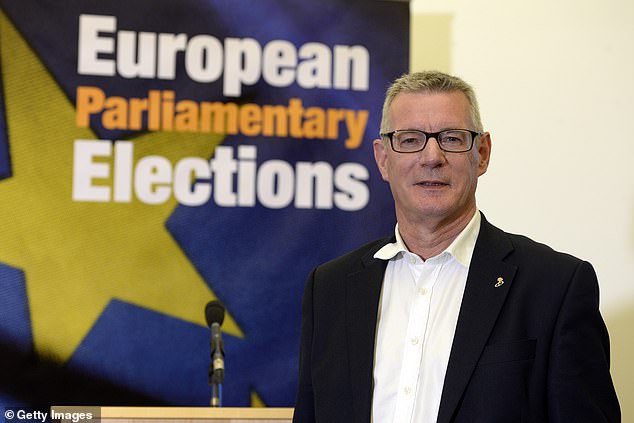 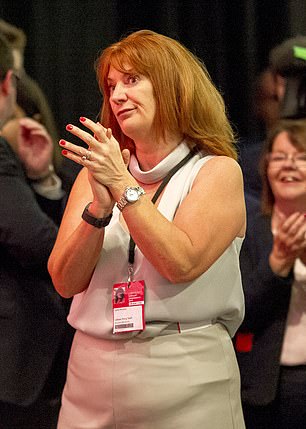 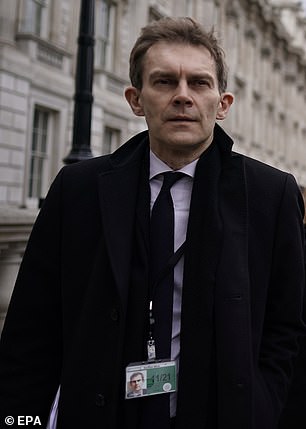 He added: ‘If Jeremy Corbyn is not prepared to make this change he should his consider his position. The buck stops with the leader.’

Both Milne and Murphy are said to be shaping the party from within, as well as shaping its Brexit policy.

There had also been controversy last week after what one shadow cabinet member called the ‘bureaucracy’ around Corbyn, after Campbell was expelled from the party after he revealed he had voted for the Liberal Democrats.

Corbyn is said to be facing demands to reinstate Campbell, and several members of the shadow cabinet also revealed they will insist on it. They will also demand that Corbyn make a speech to clarify policy on Europe. 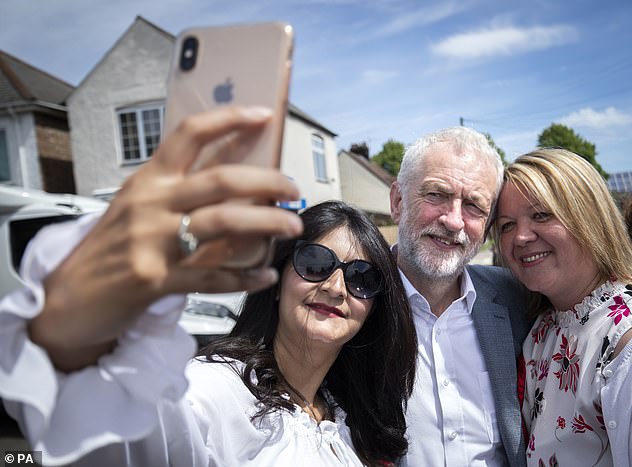 Jeremy Corbyn’s leadership (pictured campaigning in Peterborough) is ‘doomed’ if Labour crashes to defeat in this week’s by-election, his allies admit 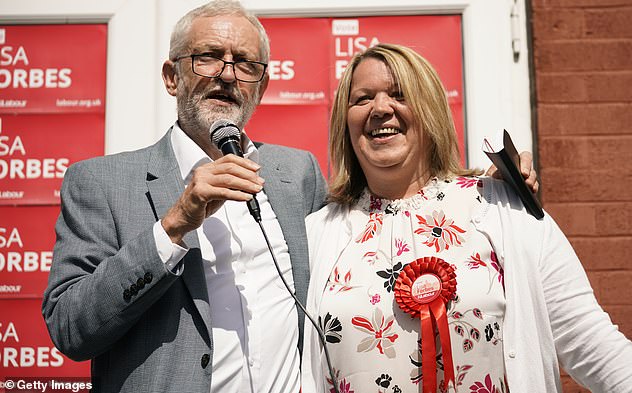 The added pressure on Corbyn comes ahead of a by election in Peterborough, following the conviction of the former Labour MP Fiona Onasanya, who lied about a speeding ticket.

Earlier this week, Corbyn’s allies also hinted that Corbyn’s leadership would be ‘doomed’ if Labour crashes to defeat in this week’s Peterborough by-election.

They said yesterday that they conceded last night that his position would be ‘untenable’ if the Labour-held seat fell to the Tories or the Party.

A senior Labour MP said: ‘Lose on Thursday and it’s basically the beginning of the end for Jeremy.

‘If we can’t win a by-election in a seat we already hold, even if it’s a marginal, then it’s really all over for Jeremy. His morale is already very low.’ 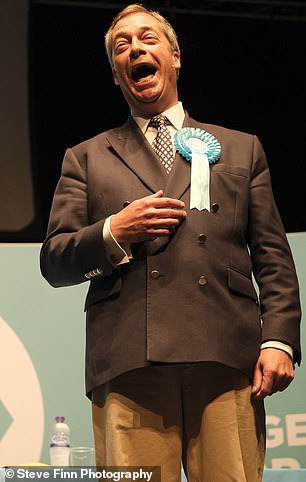 Blunkett also added that it was time that Corbyn acted on his promises to listen to members on European policy.

‘Corbyn has rightly adopted the slogan ‘The many not the few’, but steadfastly refuses to listen to the many and listens only to the few. Certainly not MPs, the vast majority of whom want a confirmatory people’s vote with the option of staying in. Certainly not the members, who want the same and who want to see leadership not acquiescence on Brexit.’

Just yesterday, during a visit to Peterborough, Corbyn said the party’s campaign was focused on ‘core Labour values’.

The area has traditionally been fought over by Labour and the Conservatives. However the Brexit Party is gaining speed.

Nigel Farage has also made a final push to follow up his Brexit Party’s extraordinary European elections triumph into its first seat at Westminster.

Addressing a packed rally in the constituency yesterday, Mr Farage boasted that the European result had ‘absolutely mortified’ the established parties, but suggested winning the by-election would be an even bigger result.

But despite bookmakers making Mr Farage’s party the favourite, there are also predictions that the Tories, who lost the seat by just 607 votes to Labour in 2017, could snatch it back.

Well-placed sources said the Labour leader was ‘shaken’ when the Lib Dems managed to top the European poll even in his North London backyard of Islington.

There are also reports of a growing rift between Mr McDonnell and Milne, Mr Corbyn’s strategy director and closest adviser.

And Northern Labour MPs in Brexit-backing seats are furious over Mr Corbyn’s move towards supporting a second referendum in the wake of the European elections disaster. 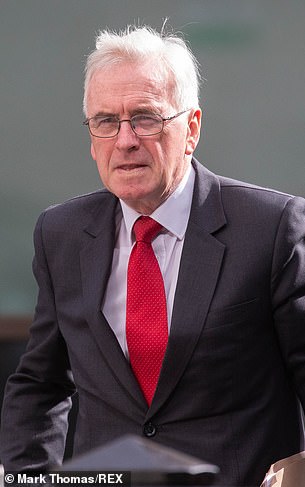 One said: ‘If we lose Peterborough because Corbyn panicked ten days before the by-election, it’ll be unforgivable.’

But a source close to Mr Corbyn dismissed talk of any threat to the Labour leader’s position as ‘nonsense and mischief’.

In poll published today, the Brexit party was in first place, overtaking Labour.

The poll, run by Opinium and the Observer found that it was the first time the party achieved a top position in a national poll with 26 per cent.

Labour held 22 per cent, the Conservatives 17 per cent and the Lib Dems 16 per cent.

When asked what they wanted their parties position on Europe to be, 65 per cent of Labour members said they wanted a second referendum or to remain, with just 17 per cent wanting a soft or hard Brexit.

Adam Drummond, of Opinium, said: ‘All of the big winners from the European elections have seen some sort of a boost, with the Brexit party adding another two points to move into first place while Labour have fallen back significantly, losing seven points. While the Lib Dems have experienced a boost, the under-reported story from the elections and since then has been the Greens, who have gained eight points since our last poll.

‘While the usual caveats should apply about how much to read into Westminster voting intention polls given the proximity to the European elections, the fact is that we might be less than six months out from a general election, so these might become relevant very quickly.’