A DESPERATE CEO who offered over £8,000 to anyone who could find him a girlfriend is now ENGAGED after making his new partner take a series of tests.

After releasing a dating advert on his own website in December 2017, Joe Cohen, 32, decided to go the extra mile to find a suitable mate. 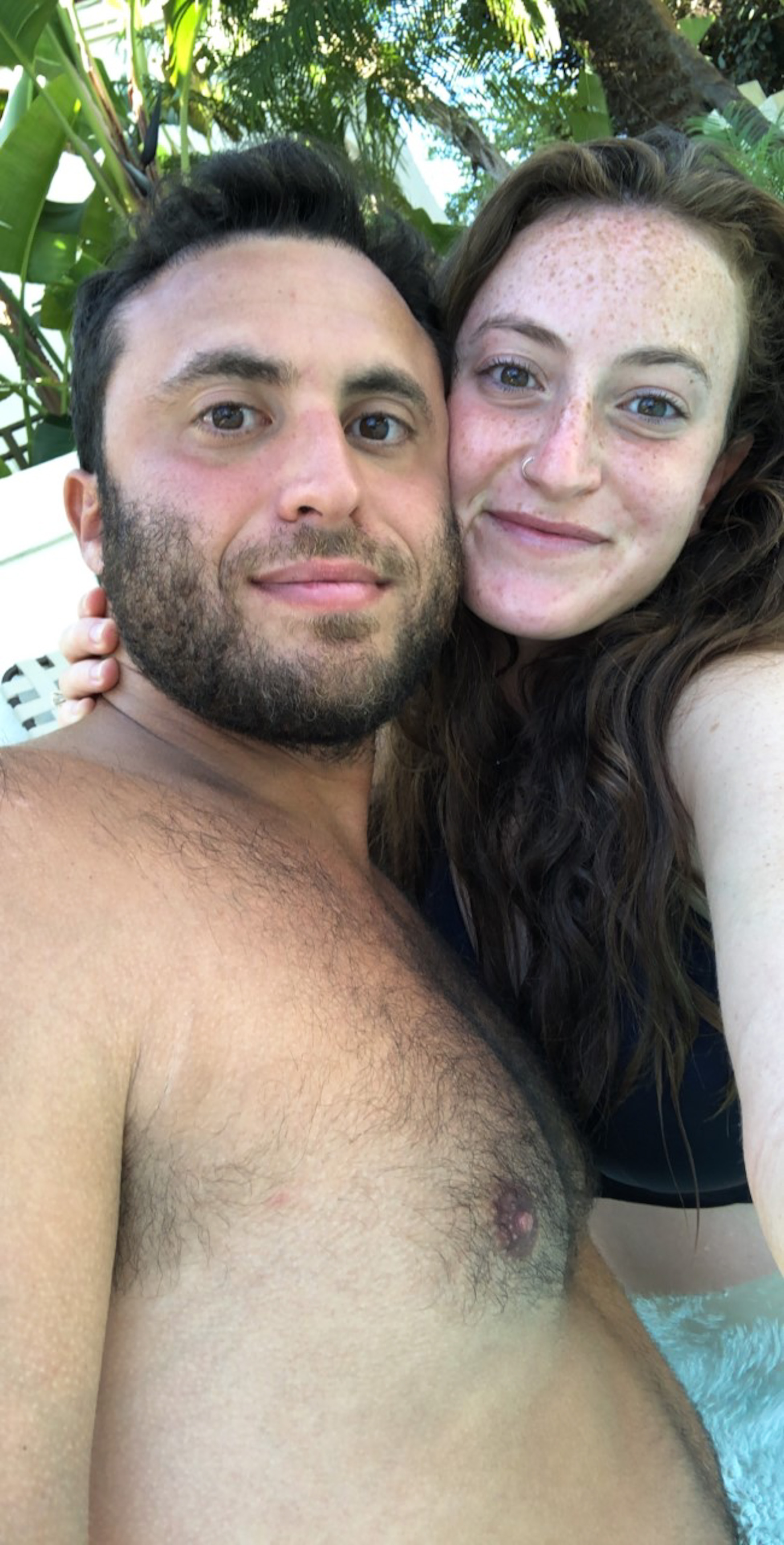 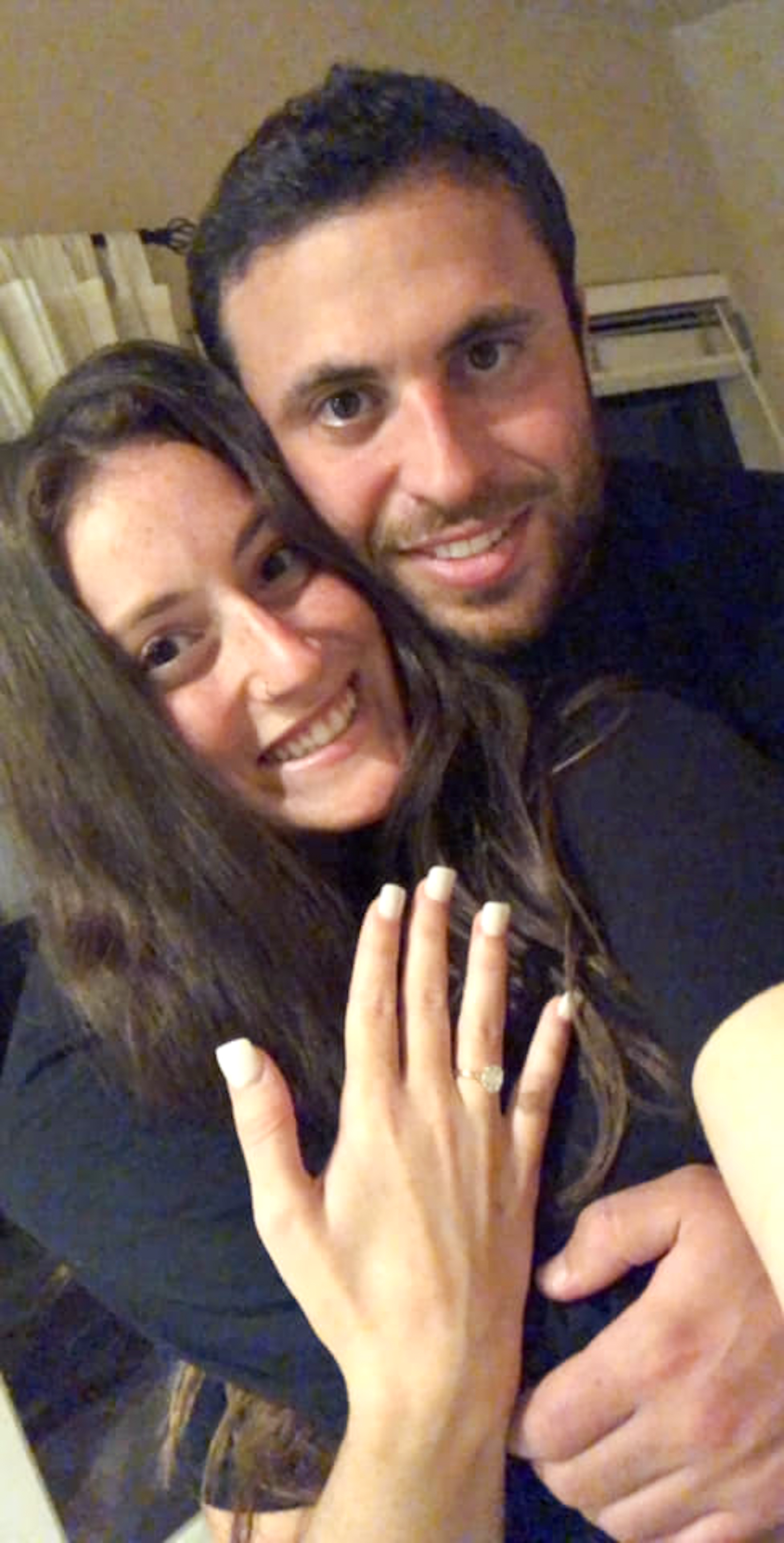 Despite the ad attracting worldwide attention thanks to the fact it offered £8,000 to anyone who'd find Joe a girlfriend, the CEO claims that he was more successful doing his own dirty work.

Joe, from Newport Beach, Southern California, eventually found Eliana Ferdman, 24, on Facebook after she came up on his 'people you may know' list.

Now, one-a-half-years into their relationship, Joe and Eliana are happily engaged after he used the £8,000 to buy her a ring.

The pair are now looking forward to tying the knot in May 2020.

Eliana only bagged Joe after he forced her to take a series of tests, however.

She was subjected to a serious of cognitive examinations including IQ, mathematics and verbal tests, to prove she was his ultimate match but says she passed 'with flying colours'.

In the CEO's original advert he asks for a partner with 'intelligence, low neuroticism' and said it would be an added bonus if she was 'Jewish and not materialistic'.

Joe, owner of science-based information app SelfHacked, said: "I put the advert out in hopes of finding a life-long companion, and I believe I have found that in Eliana.

"We have been together for a year and a half now, and she's pretty, intelligent, open-minded, easy-going and fits my 'checklist'.

"Despite me being very clear about the monetary value of this relationship, I don't believe Eliana is in it for the money – she provides a lot of value to my business and helps it to grow.

"Even though the big day isn't until May, we already live as a married couple; we live and work together and spend the weekends together playing beach volleyball.

"Our future looks promising – I am excited for us to have two children together and grow our business as one." 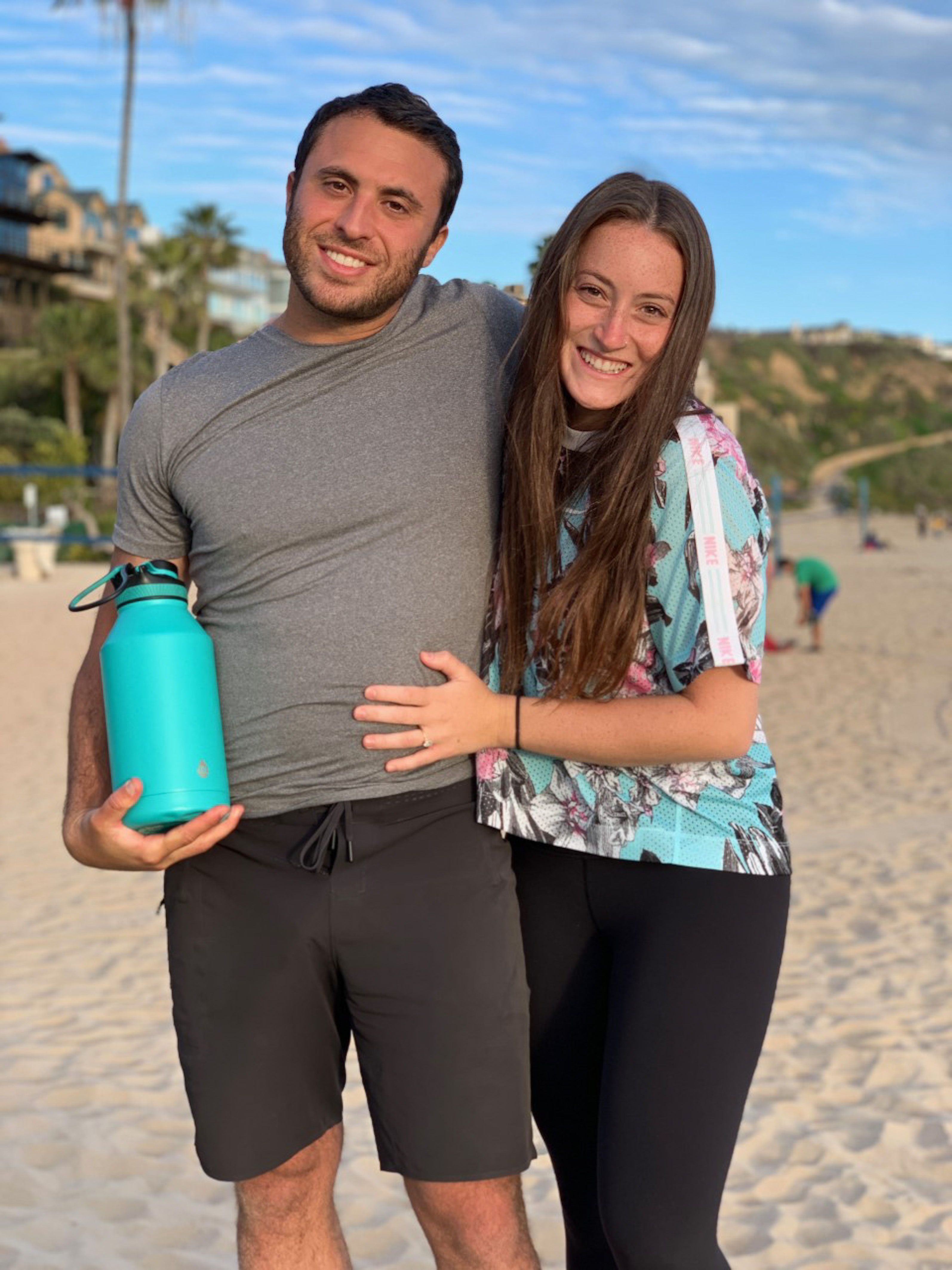 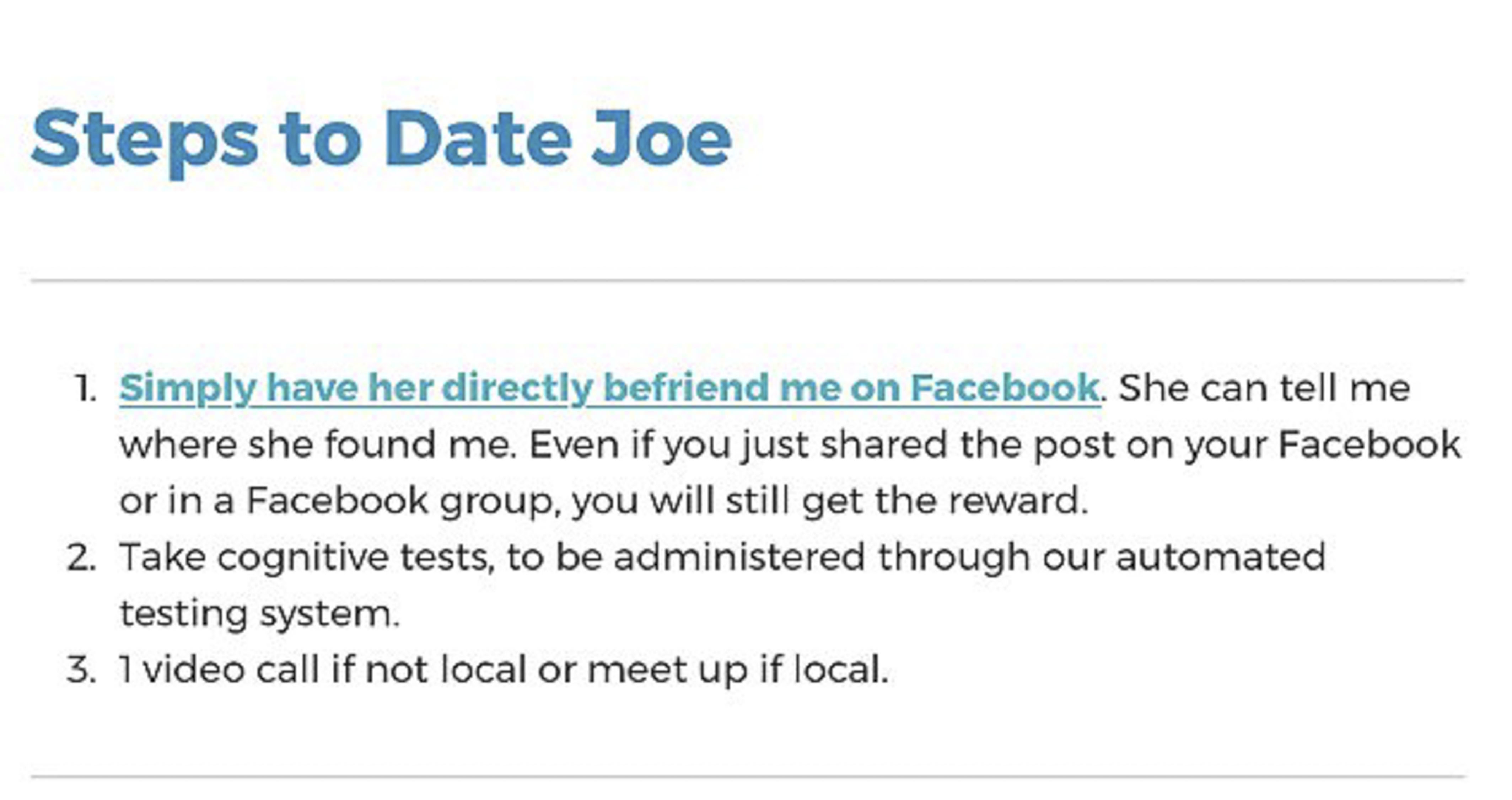 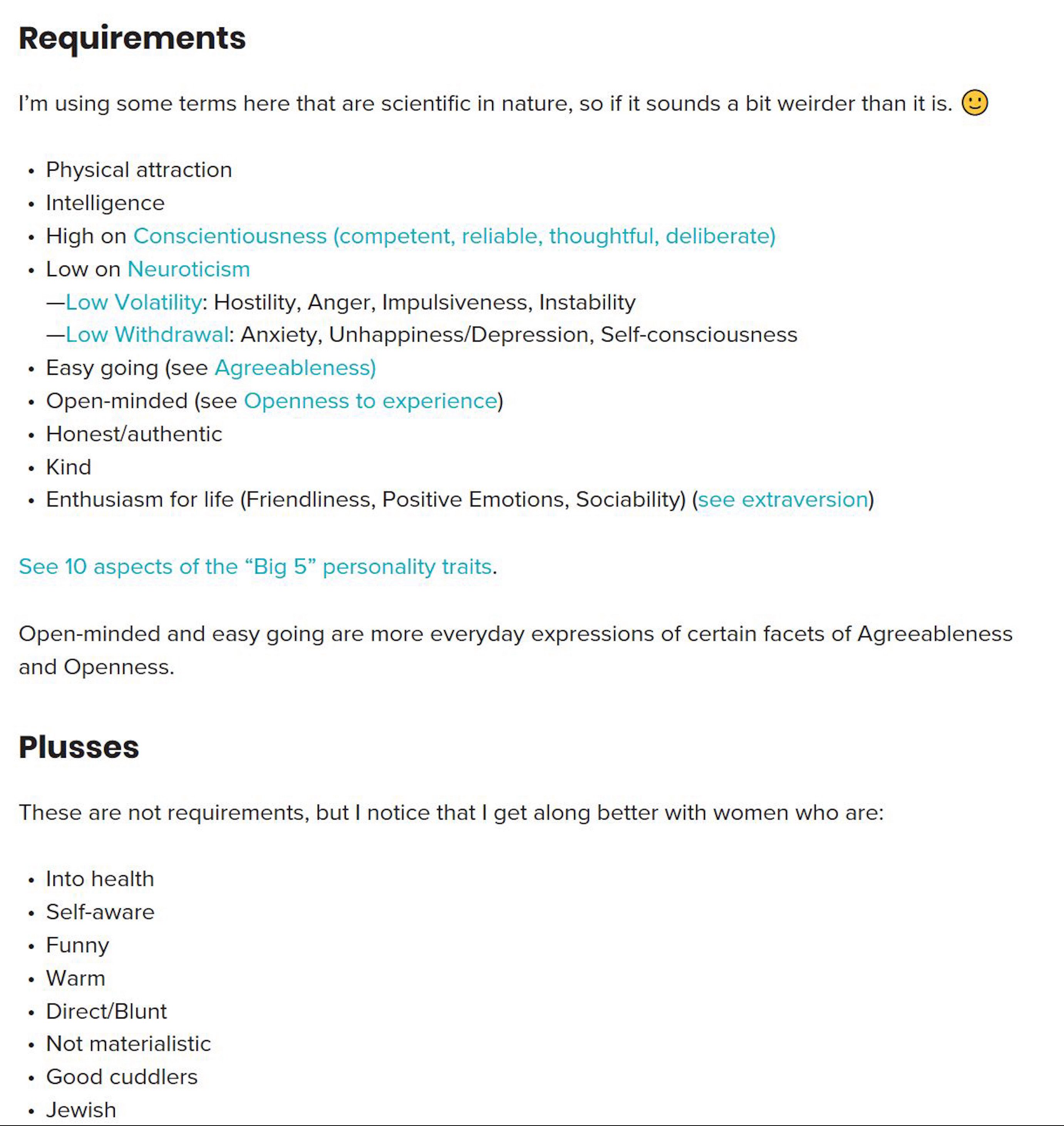 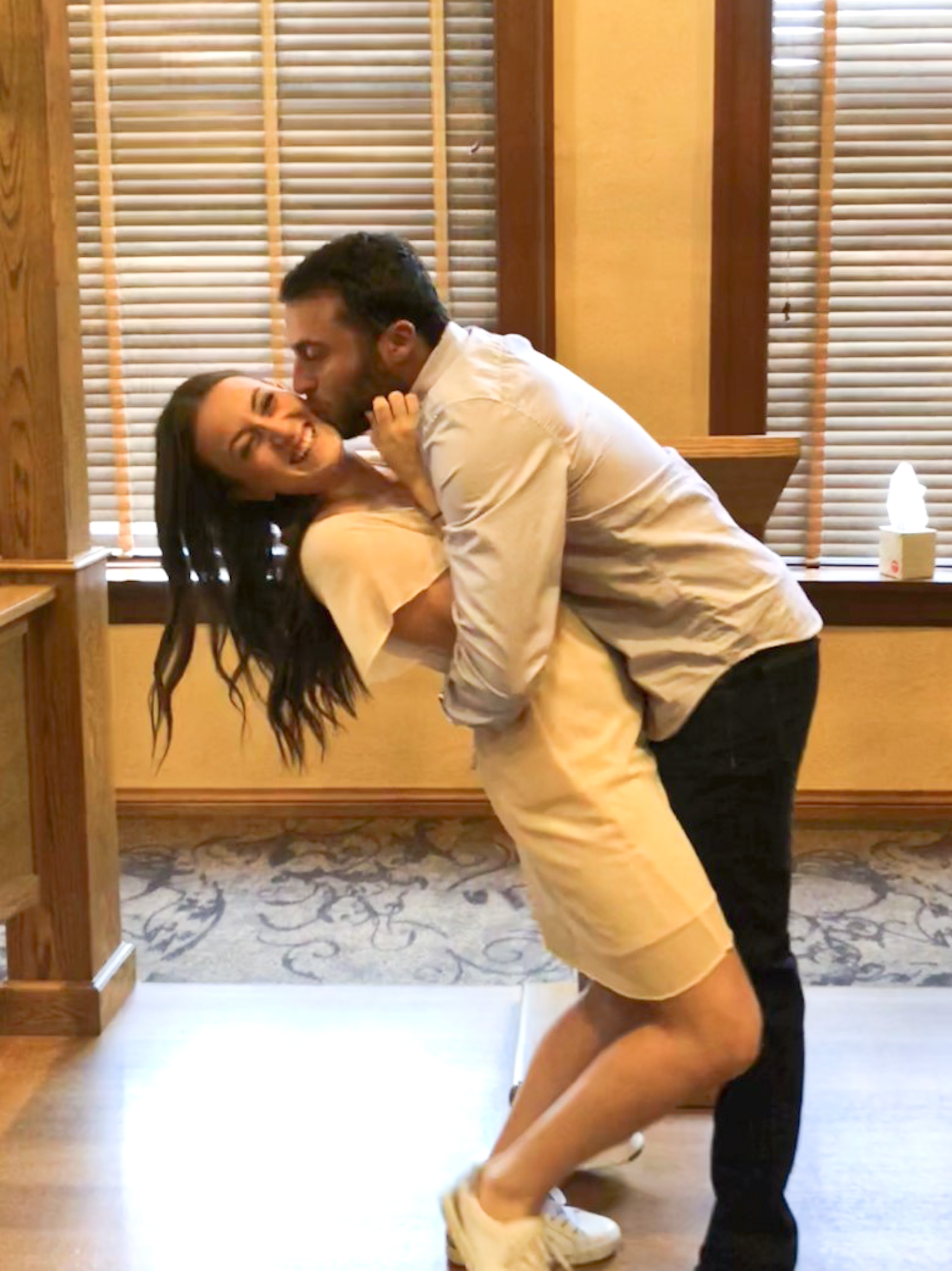 'I PASSED WITH FLYING COLOURS'

Initially Eliana thought that Joe's requirements may have come from a lack of relationship experience.

However she says after using a health app that Joe founded she realised that his requirements could help her become 'better person'.

She said: "I saw Joe's advert after we started talking and I already felt a connection, so it was pretty hilarious to me.

"It showed me he was bold and serious about finding someone.

"In hindsight I am very thankful that he stuck through that time with me and pushed me to be better.

"We're best friends and life partners – we work together, live together, spend the weekends together.

"We're growing a life together – it's more than I could have imagined.

"I did take Joe's tests voluntarily just to see how I would do and I passed with flying colors.

'BEST INVESTMENT OF MY LIFE'

Wealthy Joe initially posted the advert in hopes that he would find his perfect match both looks, personality and lifestyle wise.

Speaking about the advert in 2017, Joe said: "I’m trying this out to see how it goes. Compared to the value of a long-term companion, $10,000 is relatively little.

"In terms of Return on Investment, it’ll probably be the best investment of my life.

"I went on every dating platform out there and literally went through every match within a 30-mile radius. The apps started saying “there is no one left in your area.

"I’d like to think that I possess the traits that I’m looking for in a woman. Other people have told me I do, but there’s only one way to find out.

"I have almost no shame and live my life as if the concept of embarrassment didn’t exist.

"I’m direct and not very politically correct, as you can see from this post.

"My health-focused lifestyle is often a deal-breaker for some.

"My preferred age range is 30 or below because I’d like to start having kids in about 5 years.

"I prefer women who are 20 or over for reasons related to psychological maturity, but if she is very mature for her age, then 18 or over is fine." 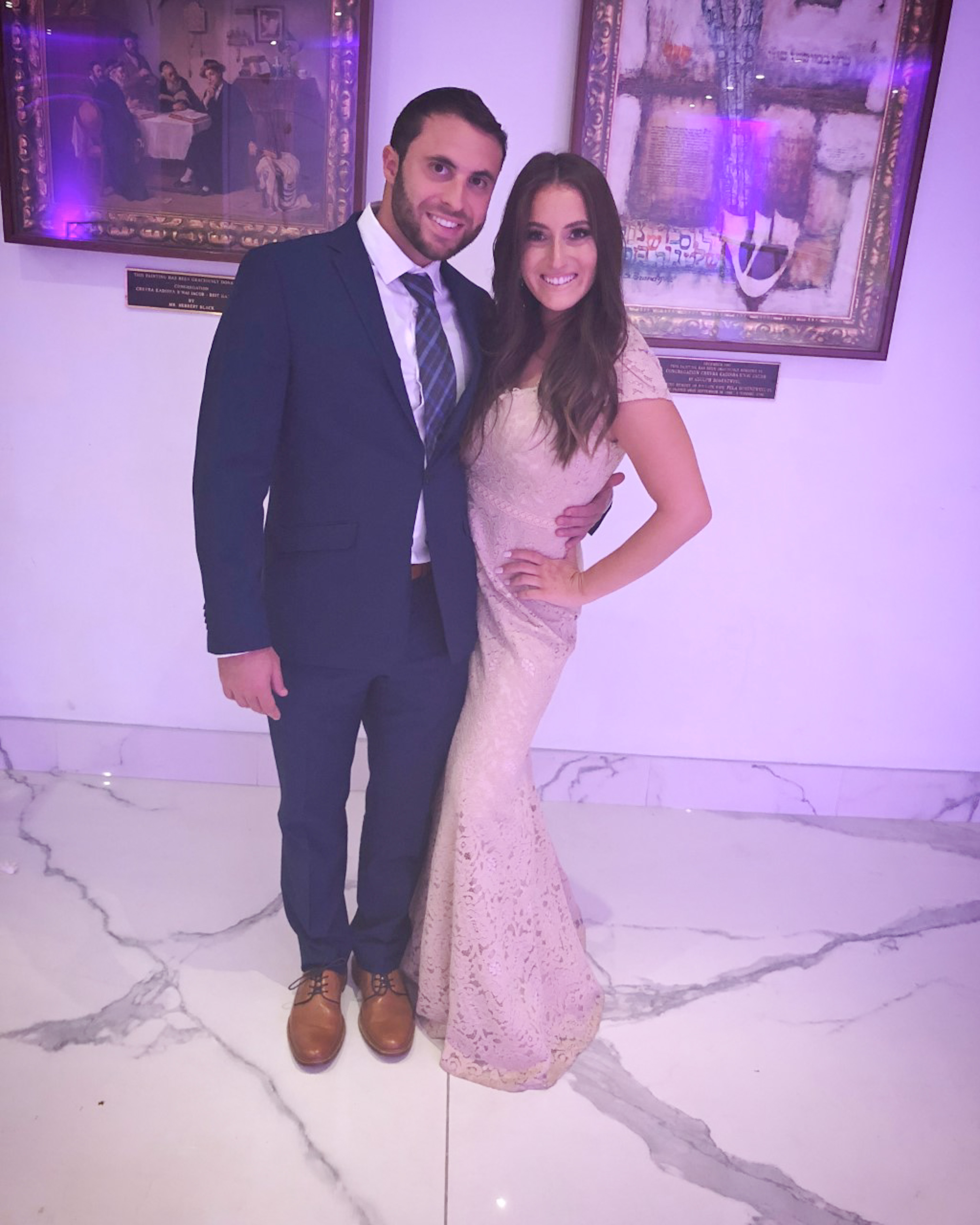 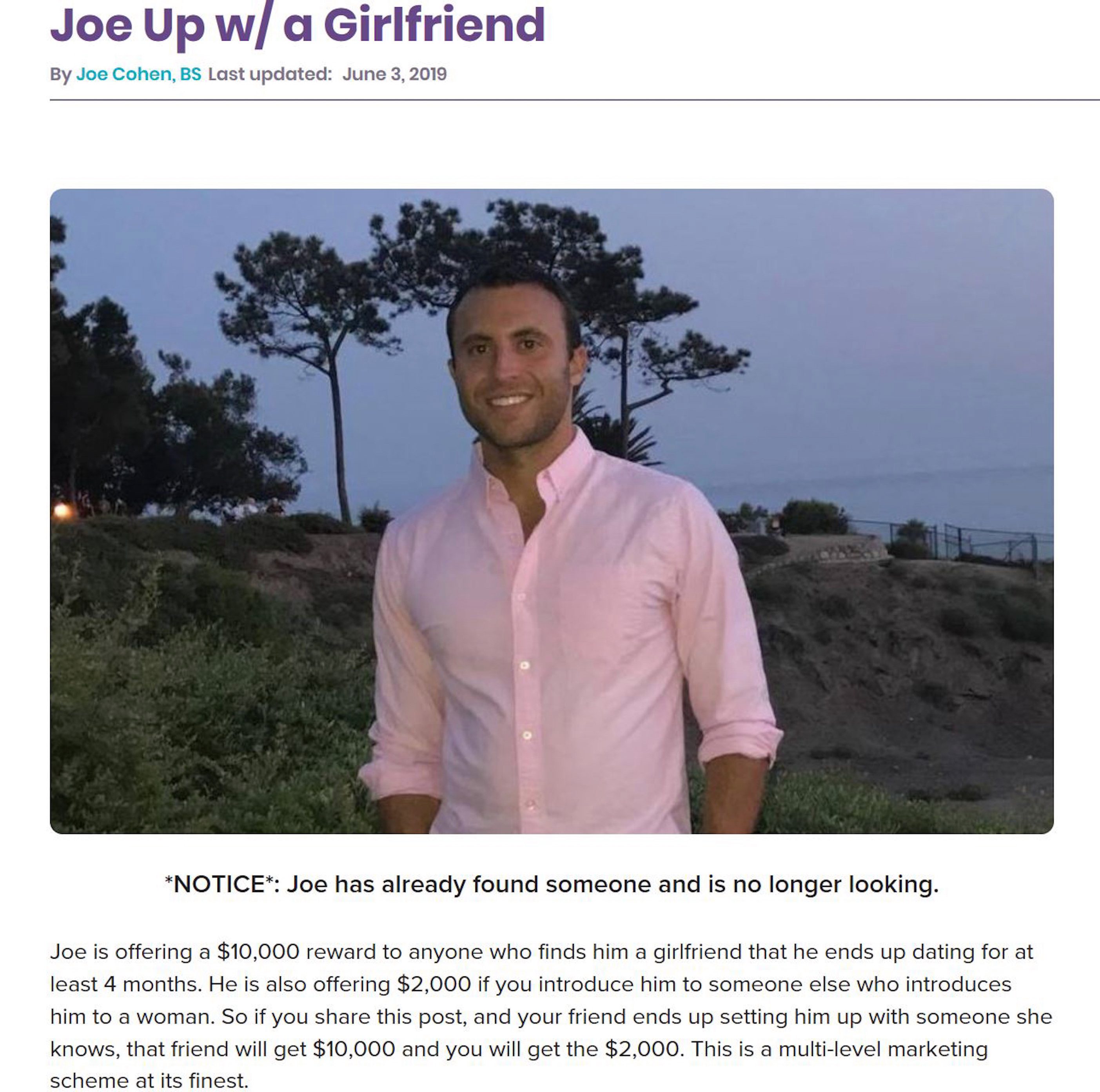 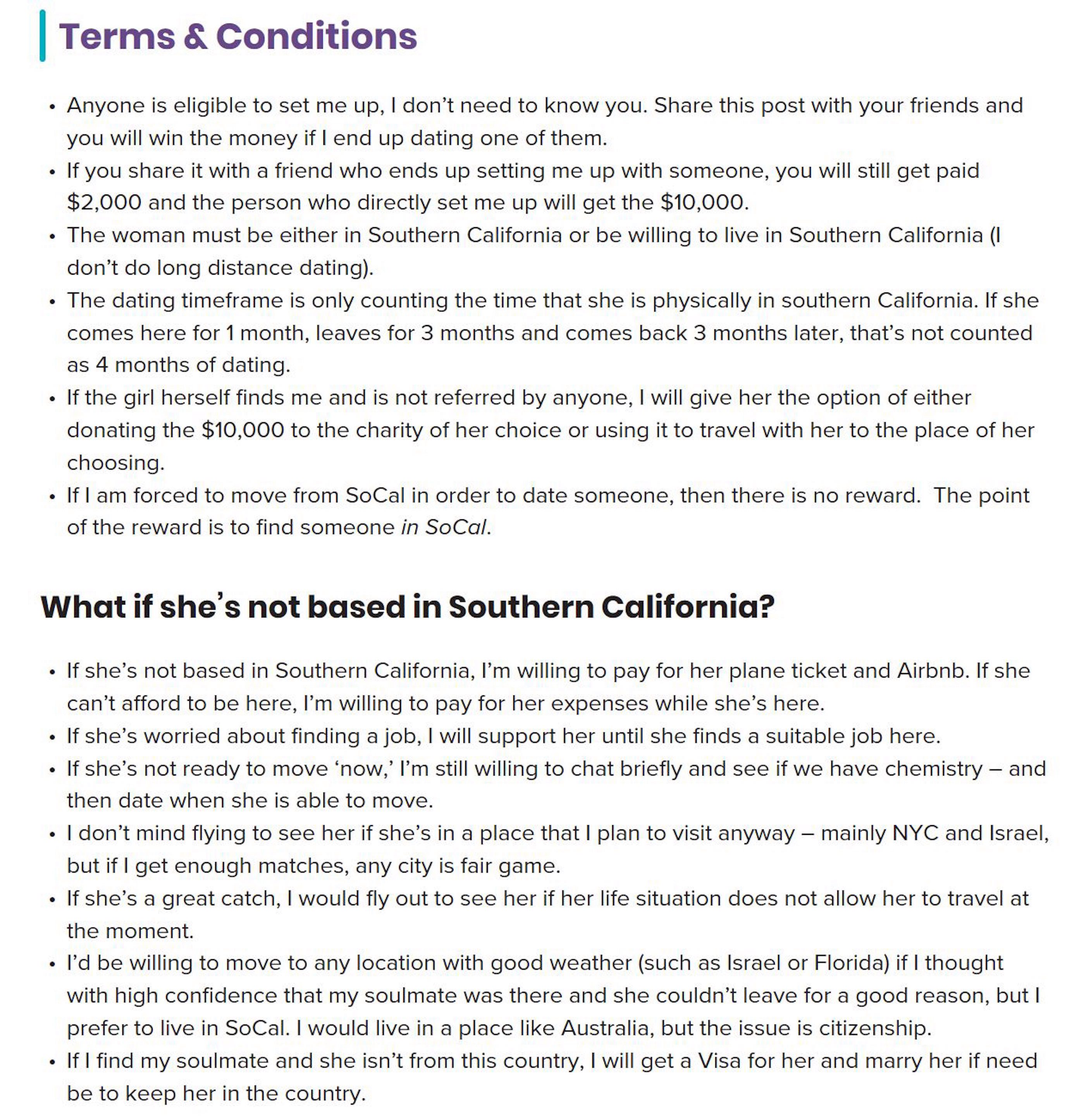 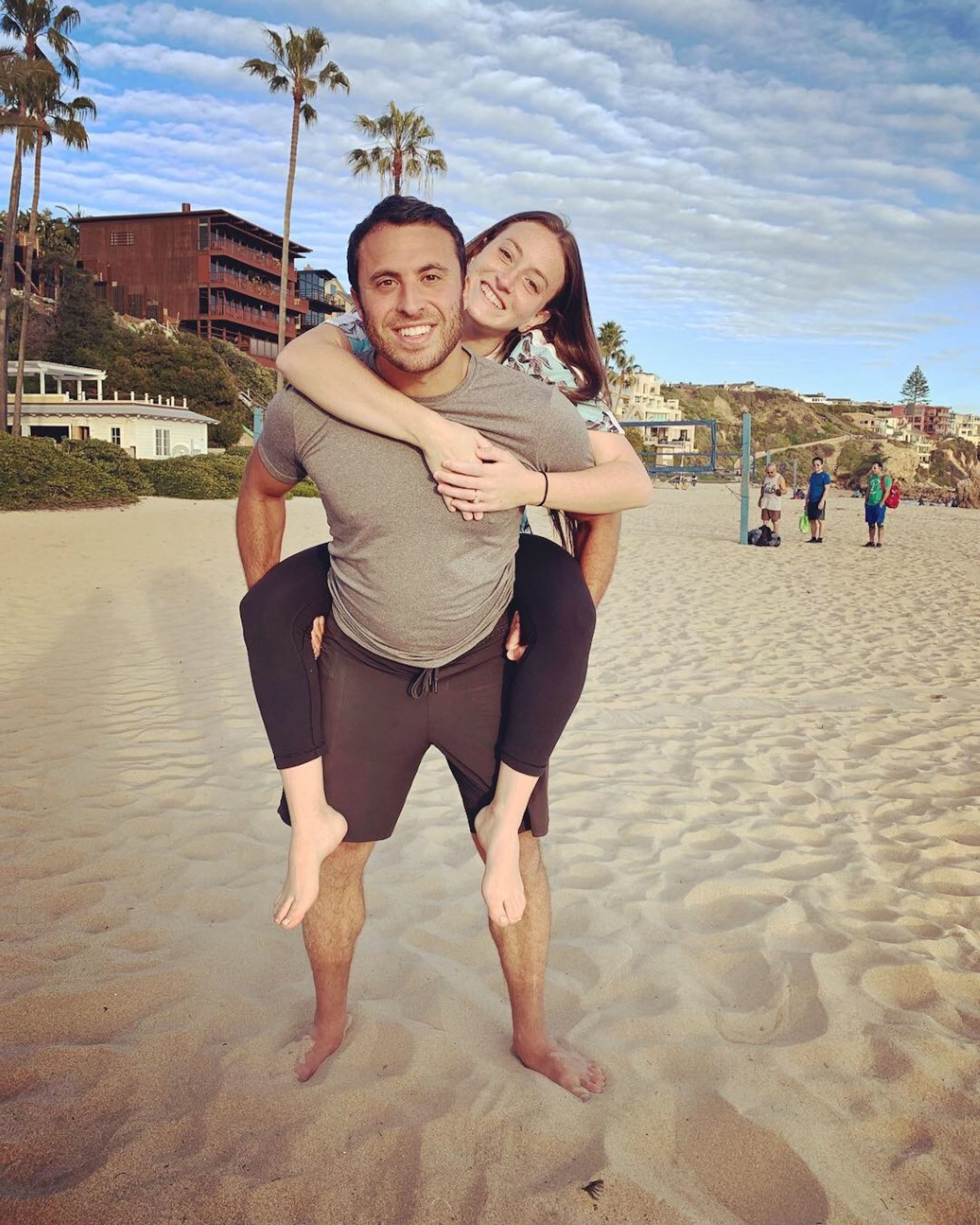 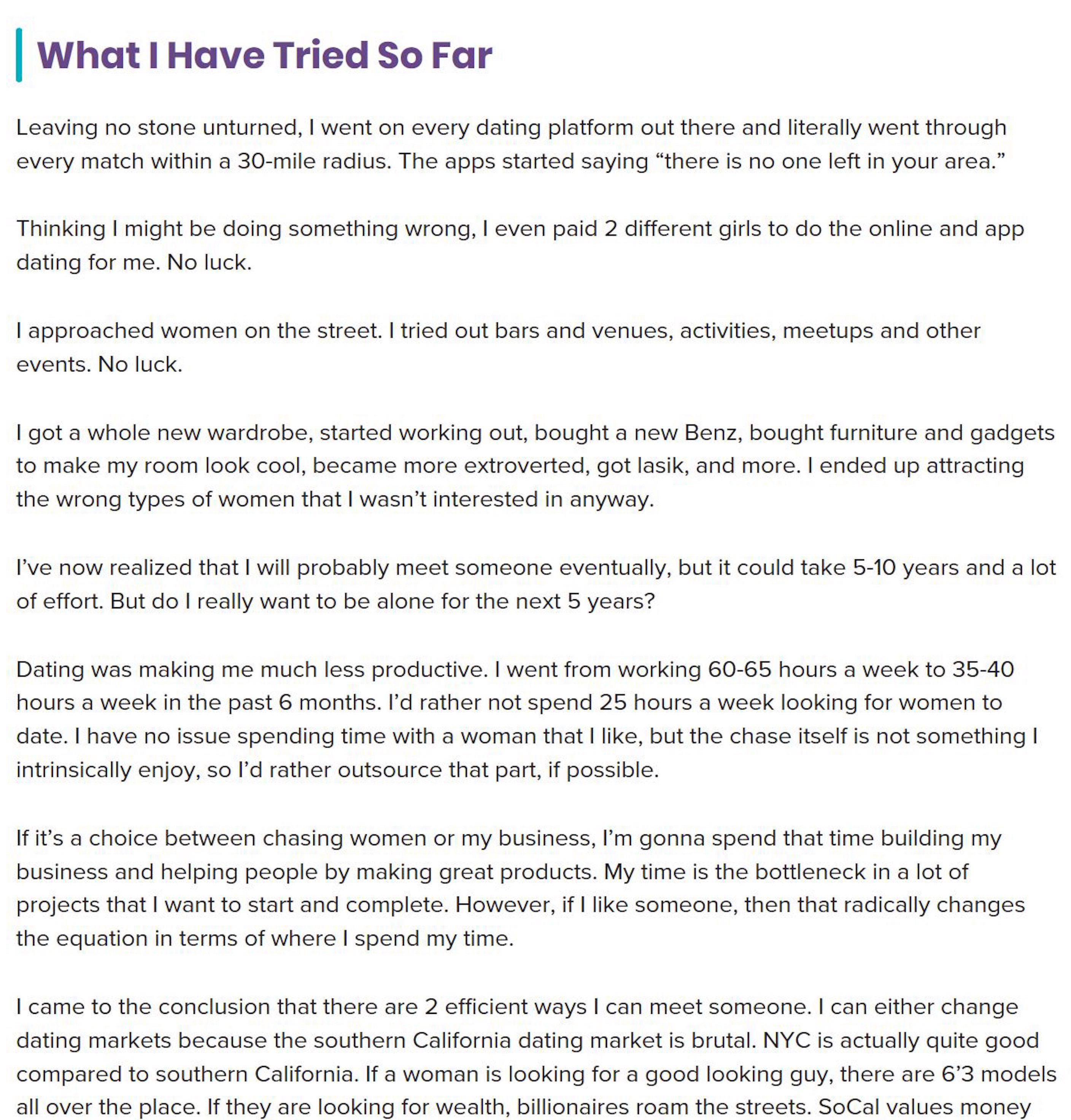 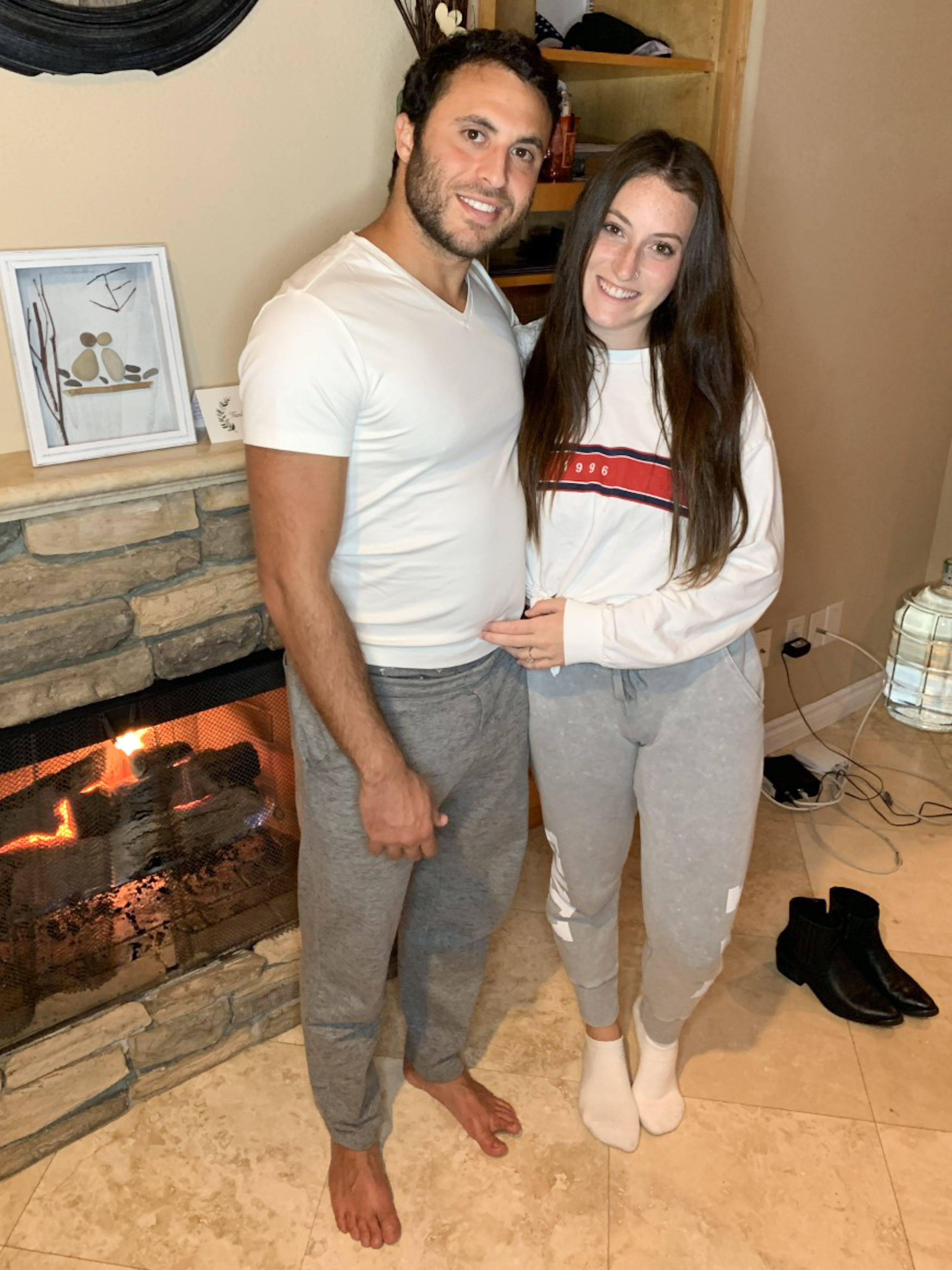