Several blasts and shootings around Copenhagen this year have prompted Danish authorities to tighten border controls at the country’s crossings with Sweden.

Over the weekend, Danish police conducted checks on trains and vehicles crossing the Oresund Bridge over the narrow waterway that separates Copenhagen, Denmark's largest city, and Malmo, Sweden's third-largest. 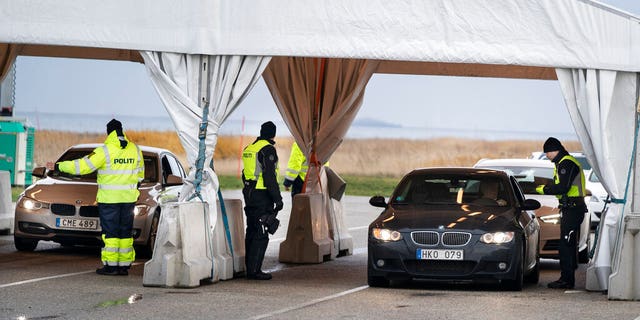 Danish police check travellers from Sweden, near the Highway coming out of the Tunnel near Copenhagen, Denmark.
(Liselotte Sabroe/Ritzau Scanpix via A)

"It gives us a pretty good picture of who is coming over," he said.

The new border controls, along with a passport requirement for Swedes crossing into Denmark, follow roughly a dozen explosions in  Copenhagen since February, and a shooting in June that killed two Swedish citizens.

The violence is believed to be gang-related, stemming from disputes involving drugs, money, protection and retaliation. Some 200 people in Malmo belong to about a dozen gangs.

Gunfire in Malmo on Saturday killed a 15-year-old boy and critically wounded another. Police said the teenagers who were shot were known to authorities in Malmo, and officials vowed to crack down even further on organized crime. No arrests have yet been made.