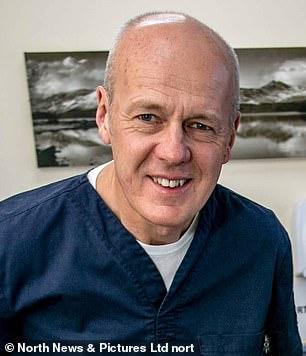 Chris Bennett, owner of Cestria Dental Practice, in Chester-le-Street, County Durham, who has been suspended from practising for six months

A dentist has been suspended from practising for six months following a series of incidents of inappropriate and ‘creepy’ behaviour towards two young dental nurses.

Father-of-two Chris Bennett, the owner of Cestria Dental Practice, in Chester-le-Street, County Durham, stroked the hair of two dental nurses for ‘sexual gratification’ and stripped down to his underwear when female members of staff were present, a disciplinary hearing of the General Dental Council was told.

The dentist admitted sending a text to another employee saying: ‘Hey! Am at Infinite Air surrounded by teenage girls bouncing up and down – it’s perverts paradise!! Think I’ll come again!X.’

But he denied several other complaints, including from the two dental nurses who described how he would often stroke their hair in a way they found ‘creepy’ and which made them feel uncomfortable.

But the committee found that Bennett had stroked the women’s hair, and it had been sexually motivated.

The hearing’s findings noted: ‘Based on the evidence before it, the committee considered your actions were inappropriate and crossed the lines of working relationships.

‘The committee considered there was no other plausible explanation as to why you did so but for the purposes of sexual gratification.

‘It is considered that as you had a position of responsibility as the owner of the practice, you ought to have had heightened sensitivity to young female employees at the practice.’

One of the dental nurses told the committee she was ‘disgusted and alarmed’ when Mr Bennett once said ‘I bet his penis is tiny’ in reference to a patient. The hearing found the complaint proved.

The hearing also found proved that he had told one of the women to ‘go upstairs and shove some gauze up my a***’. 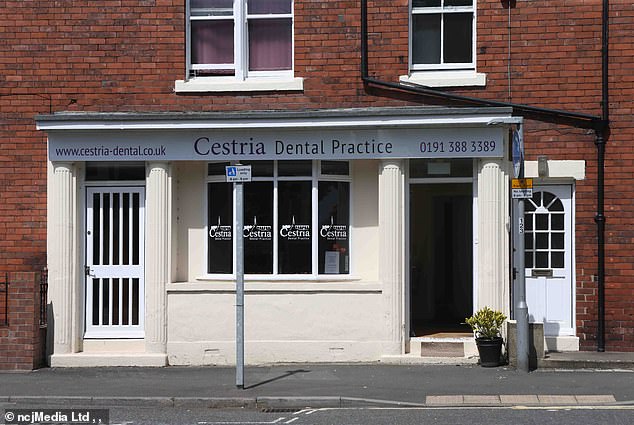 One of the dental nurses told the committee she was ‘disgusted and alarmed’ when Mr Bennett once said ‘I bet his penis is tiny’ in reference to a patient (pictured: Cestria Dental Practice)

The same employee told the committee Mr Bennett would walk in on her getting changed.

Although she would indicate she was getting changed by holding something in front of her, he would not leave the room and continued talking to her, making her feel uncomfortable.

In his evidence, Mr Bennett, admitted walking in on her, but said she had never made a complaint about the changing arrangements in the practice. The committee ruled there was no inherent sexual element in Mr Bennett’s actions in this matter.

Witnesses told the hearing it was a small practice with limited space. But the committee determined that in spite of this, it was inappropriate to walk in and remain. And, it added, Mr Bennett should have initiated a more appropriate system for members of staff to change.

Sam Thomas, representing the GDC, said Mr Bennett’s unwanted actions towards two junior employees represented an abuse of his position of trust and showed a ‘blatant disregard for professional boundaries’.

Nadia Motraghi, representing Mr Bennett, told the hearing he had taken steps to address matters of concern in the practice and had undertaken a course on professional boundaries.

She said the matters in the case represented a ‘relatively discrete period in an unblemished career of 30 years’.

The committee found Mr Bennett’s actions amounted to misconduct and ordered a review hearing take place before the expiry of the suspension.

A number of charges were found not proven.