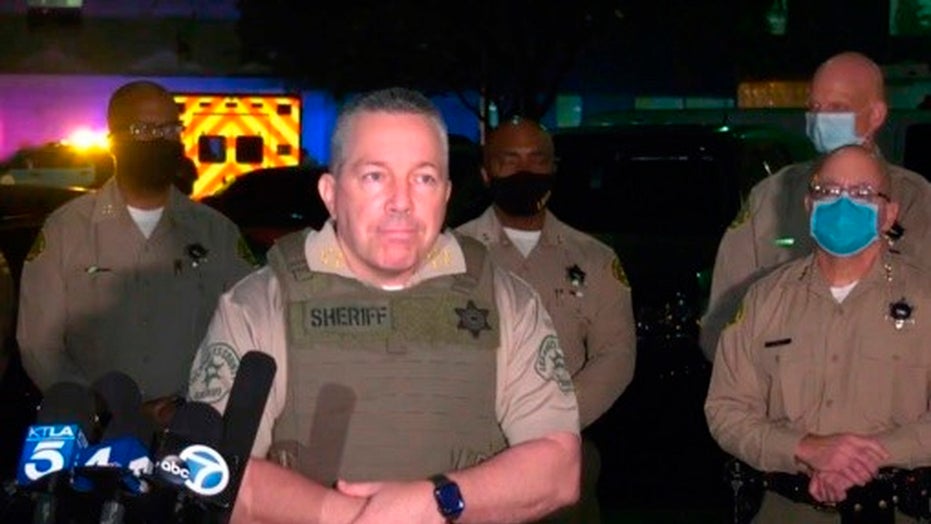 Los Angeles County sheriff Alex Villanueva provides an update on the health of the ambushed deputies and the state of the manhunt for the suspect.

One of the deputies wounded in a brazen ambush in Compton, Calif., over the weekend was released from the hospital Wednesday, Los Angeles County Sheriff Alex Villanueva said.

“Great news, one of those deputies was released from the hospital today,” Villanueva tweeted Wednesday night. “He has a long road ahead for recovery. But he's not alone. We, as a community, are in this together.”

Villanueva did not identify the deputy, who was one of two shot in the head as they sat in a marked car near a transit station Saturday.

Video of the attack shows a gunman in dark clothing walk up to their vehicle, fire into the passenger side window and run away.

Both deputies had been on the job for about 14 months, Villanueva said over the weekend.

Earlier Wednesday, the sheriff said investigators were following “multiple leads” and believed they were making progress in a massive manhunt for the gunman and a possible getaway driver.

No suspects have been identified.

"Our detectives are confident they're on the right path," Villanueva told Bill Hemmer on "Bill Hemmer Reports."

A GoFundMe page set up by a sheriff's detective has raised more than $550,000 to help the wounded deputies – identified as a 31-year-old woman and 24-year-old man. Separately, more than $300,000 in reward money — a mix of public funds and private donations — is being offered in the case.

The sheriff’s department has faced criticism in recent months for its handling of a number of incidents, including leaked photos in May of the helicopter crash that killed Kobe Bryant and seven other people. Bryant’s family is suing the department in connection with the incident.