George Pell’s bid for freedom: Jailed Cardinal’s barrister says it is beyond the ‘law of physics’ he could have abused young choirboys

George Pell’s defence team says it’s beyond the ‘law of physics’ the disgraced Cardinal could have have abused young choirboys.

Sydney barrister Bret Walker SC – who is leading Pell’s last-ditch appeal against his convictions – went immediately on the attack in the Victorian Supreme Court in Melbourne on Wednesday .

He told the court his client couldn’t have sexually assaulted the boys in the sacristy if he was meeting parishioners at the western door of St Patrick’s Cathedral — adding that the distance was ‘as good as being across the Tasman’ in the eyes of the law.

‘If he was at the western door then the law of physics means this is literally and logically impossible for the offending to have occurred,’ he said.

Pell arrived at court wearing his traditional clerical garb after being transported from prison to the court for his appeal hearing. 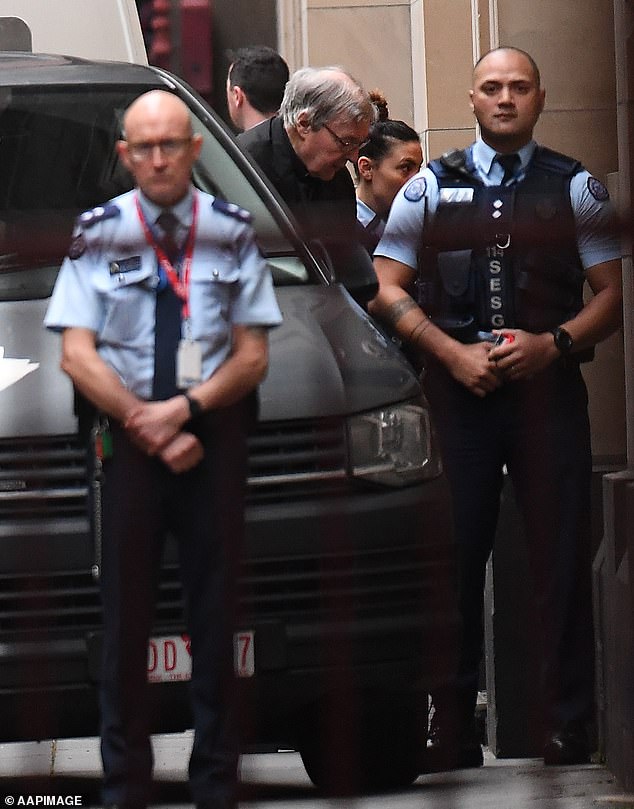 His appearance in black, with a white collar, is a return to a more confident-looking Pell, after he appeared at his sentencing in civilian clothing.

Pell looked healthy in his first public appearance since being jailed in March.

Seated in front of burly prison guards, Pell was seen to be taking notes throughout the proceeding.

Lawyers for Pell will try to convince the court that their client was treated unreasonably during a jury trial which found him guilty of molesting choirboys.

In written submissions, Pell’s defence claimed more than 20 prosecution witnesses who had an official role in that Sunday’s solemn mass – after which the jury accepted the offending occurred – gave evidence the offences did not or could not have occurred.

‘These witnesses gave evidence, either explicitly or to the effect, that the offences alleged did not or could not have occurred,’ Pell’s defence argued.

Pell has always denied the abuse and is appealing his conviction on three grounds: that the jury verdict was unreasonable, and that two errors were made in the way the trial was run.

The timing of the alleged assaults was impossible.

It was not possible for Pell to be alone in the sacristies only a few minutes after the end of Mass.

It was not possible for Pell to be robed and alone in the priests’ sacristy after Mass.

It was not possible for two choir boys to be sexually assaulted in the priests’ sacristy after Mass by Pell undetected.

It was not possible for two robed sopranos to leave an external procession without being noticed.

The criminal acts attributed to Pell were physically impossible.

County Court Chief Judge Peter Kidd erred in not allowing Pell’s defence to present a video in his closing arguments, and that there was a ‘fundamental irregularity’ in how Pell was arraigned at trial.

Pell was convicted of sexually abusing his victims in the priests’ sacristy at Melbourne’s St Patrick’s Cathedral after presiding over one of his first Sunday masses as archbishop.

He abused one of the boys a second time in a corridor at the rear of the cathedral after another Sunday mass.

Pell’s legal team has attacked the jury that found him guilty, arguing it had ‘no rational basis to reject evidence’.

‘No rational basis for rejecting this evidence was ever advanced by the prosecution at trial,’ it stated.

In response, Prosecutor Mark Gibson, SC argued the one issue for the jury was whether the acts Pell was accused of had happened.

‘By and large none of these witnesses were in a position to say that the offending “did not happen”,’ he stated in written submissions. 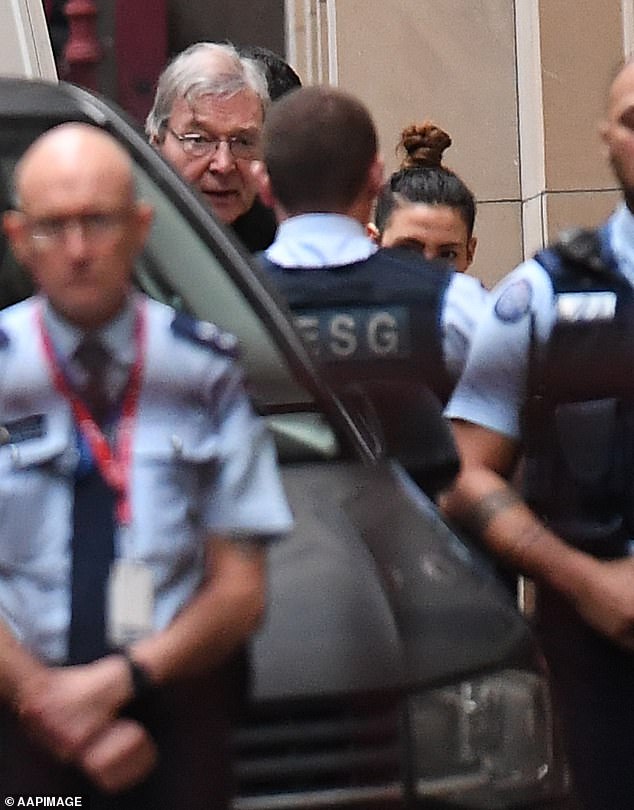 ‘Rather, the evidence from a handful of witnesses suggested that certain scenarios, such as the Archbishop being alone and robed, were unlikely.’

Prosecutors have countered each of the defence claims, arguing evidence showed it was possible, and hit back at the claims against Mr Gibson’s closing address was ‘without merit’.

‘The events described by various witnesses … established that there was more than ample opportunity and circumstances for the offending, described by the complainant, to have occurred,’ their submissions claimed.

‘The day itself, whilst significant and memorable for the complainant, could not be described as remarkable for anyone else who was simply going about the business of Sunday mass.’

Chief Justice Anne Ferguson said the Court of Appeal was already ‘quite familiar’ with the evidence and the arguments at play.

‘Nevertheless, we expect that counsel will wish to take us to parts of the evidence today and tomorrow. That will only be a small part of the evidence. Of course, in reaching our decision, we will have regard to the whole of the evidence,’ she said.

The second boy abused by Pell died in 2014. Lisa Flynn, a lawyer representing that man’s father, said the appeal had caused him sleepless nights.

‘Understandably he is feeling really anxious knowing that George Pell’s conviction could be overturned but he is extremely hopeful that this will not be the case.’

The conviction was only publicised in February after a gag-order was lifted. 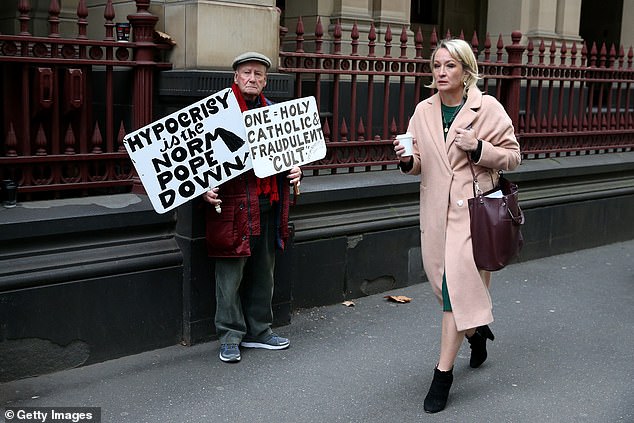 Pells appearance at court marks the first time he has been spotted since sentencing in mid-March (pictured, a protestor could be seen standing outside the Supreme Court as Pell begins his appeal hearing on Wednesday)

A judge noted the cardinal could well die in prison.

Pell’s appearance at court marks the first time he has been spotted since sentencing in mid-March.

The hearing was moved from the Court of Appeal to the Supreme Court because of the scope of interest in the case.

A crowd could been seen gathered outside of the court with a protester brandishing a placard.

Inside, a line of people snaked down the hallway of the Supreme Court where dozens of people lined-up outside court 15, where Pell’s fate will be decided.

Professor Jeremy Gans, who heads the Melbourne Law School and is an expert on Victorian criminal law, said Pell has a strong chance of winning the appeal on the ground that the verdicts were ‘unreasonable’. The appeal is being heard by the chief justice of the Supreme Court of Victoria, Justice Anne Ferguson, president of the Court of Appeal Justice Chris Maxwell, and Justice Mark Weinberg.

It is being streamed live online.

A decision on the appeal could be weeks or months away and if unsuccessful, Pell has declared he won’t appeal the sentence.

Support groups have warned the appeal could be traumatic for people who have experienced abuse.

‘With this appeal, there is a significant risk that many survivors will be triggered as a result, and thrown back into their own trauma, strong emotions and reactions,’ Blue Knot Foundation president Cathy Kezelman said. 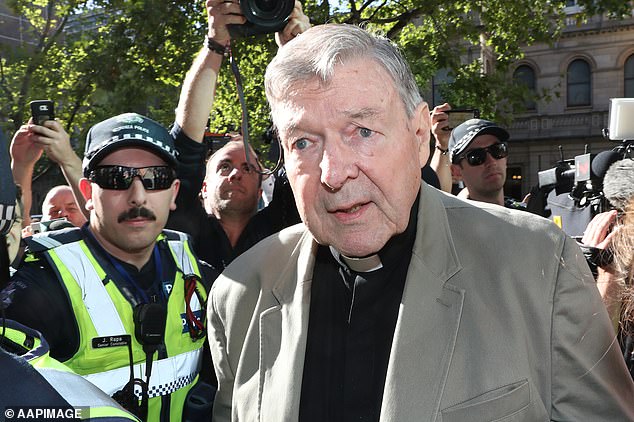 Lawyers for the former senior Vatican official will try to convince the Victorian Supreme Court that their client was treated unreasonably during a jury trial which found him guilty of molesting choirboys (pictured, Pell leaves the County Court in Melbourne in February) 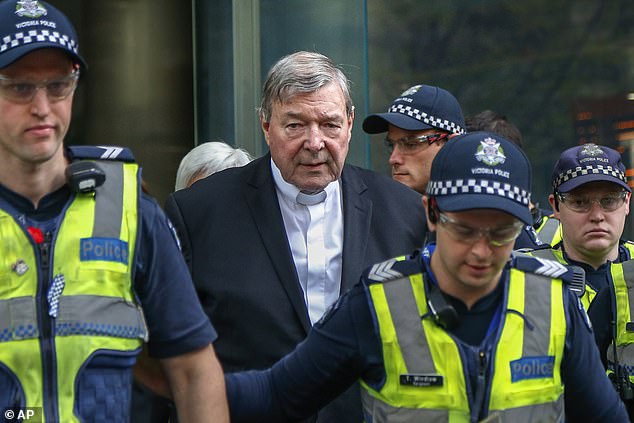 Pell had requested he be in court for the appeal hearing, and the ABC reported he will be transported from prison (pictured, Pell leaves court following sentencing in March)