Do not drink: Water warning for storm-hit suburbs in Melbourne’s east

People in Kallista, Sherbrooke and The Patch in Melbourne’s outer east have been instructed not to drink the water at their homes – even after it is boiled – because of contaminants.

The Department of Health issued an urgent warning early Wednesday morning advising people not to drink tap water until further notice if they live, work or are in Kallista, Sherbrooke or The Patch. It is expected the warning will stay in place for three days.

The contamination has happened because of an equipment failure at a Yarra Valley Water drinking water tank due to recent severe weather that has felled trees, renedered homes unliveable, forced evactuations and left thousands without electricity. 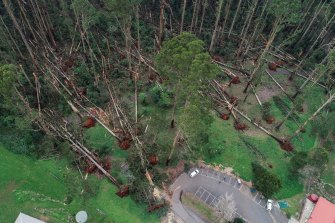 The storms have wrought damage across large tracts of the state, with thousands without power – and now many without water.Credit:Joe Armao

“Boiling water will not remove any potential contaminants, a statement issued by VicEmergency said. “Special care should be taken to not ingest the water when bathing or showering.”

The water should not be drunk, be used for washing or preparing food, preparing baby formula, brushing teeth or making ice.

Emergency drinking water is available from The Patch Hall at 5 The Patch Road and the Kallista Public Hall, 6 Tom Roberts Road, Kallista.

People must bring their own containers to fill up from tankers.

Yarra Valley Water can be contacted 13 2762 for anyone with special needs, and anyone in those areas who has ingested the water and who now feels unwell should contact a doctor, the statement said.