Doctor claims prepubescent kids can transition 'when they ask for it'

EXCLUSIVE: New documentary shows pediatrician saying prepubescent kids are ready for trans hormone therapy ‘whenever they ask for it’ and claiming you can ‘pause’ hormones ‘like music’ with the same drugs used to chemically castrate pedophiles

A new documentary shows doctors claiming prepubescent children are ready to change genders ‘whenever they ask for it’ and claiming they can safely ‘pause’ hormone development ‘like music’.

The documentary, What Is A Woman, will air tonight on The Daily Wire at 9pm.

It sees filmmaker and author Matt Walsh asking trans activists and doctors to define what a woman is through the lens of today’s political and sociological climate. Many fail to give a straight answer.

In the trailer for the film, Walsh prompts giggles from African tribesmen by asking them if a ‘man can become a woman’ and challenging protesters at the Women’s March over their idea of what a female is.

DailyMail.com can exclusively reveal another segment of the film where Matt interviews Dr. Michelle Forcier, a pediatric professor and the assistant dean of admissions at Brown University. 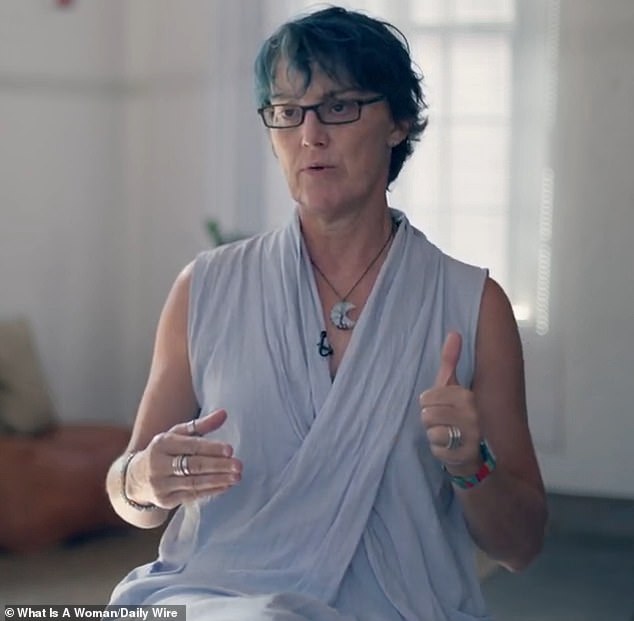 DailyMail.com can exclusively reveal a segment of What Is A Woman where Dr. Michelle Forcier, a pediatric professor and the assistant dean of admissions at Brown University, says ‘kiddos’ can start getting hormone therapy ‘when they ask for it’

In their sit-down, she says kids are ready for ‘medical affirmation when they ask for it’ – even if it’s before they have reached puberty.

‘Medical affirmation begins when the patient says they’re ready for it. 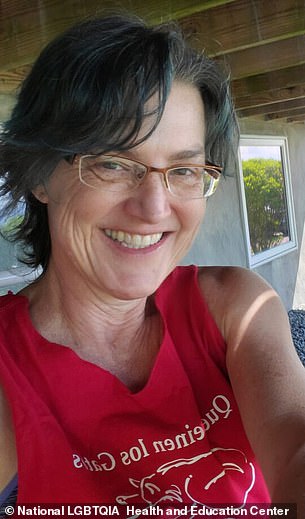 Dr. Forcier says she looks after ‘hundreds’ of trans kids

‘That could be a kiddo who is just starting puberty and they’re panicking because they’re just getting breast buds, or their penis is getting bigger and busier and they’re worried about all kinds of masculine changes,’ the doctor said.

That is when she says doctors can safely prescribe puberty blockers, claiming they are ‘completely reversible’ and ‘don’t have permanent effects.’

‘[They are] wonderful because we can put that pause on puberty, just like you’re listening to music.

‘You put the pause on and puberty would go right back to where it was, the next note in the song, just delay that period of time.’

Dr. Forcier also told him that his sperm doesn’t make him male and that an objective truth does not exist. ‘

‘Whose truth are we talking about?’ she said.

‘The same truth that says we’re sitting in this room right now you and I,’ Walsh replied.

She shot back: ‘No, you’re not listening.’

Walsh pushed back: ‘If I see a chicken laying eggs and I say that’s a female chicken, did I assign female? Or am I just observing a physical reality that’s happening?’

She also said it’s only an assumption that a chicken laying eggs is female.

Among the puberty blockers that are used is Lupron, which can also be used to treat endometriosis and prostate cancer.

It has been used in the past to chemically castrate sex offenders. 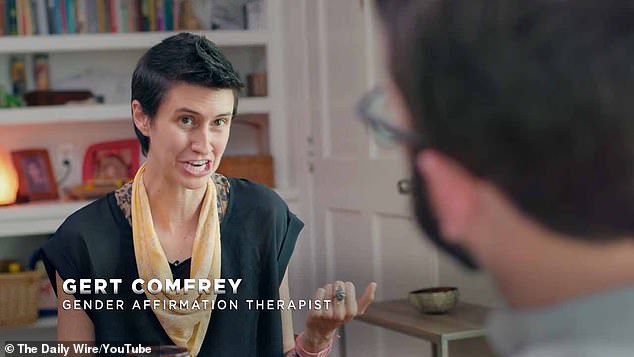 In the documentary, Walsh interviews ‘gender affirmation therapist’ Gert Comfrey who says gender is ‘assigned’ to kids at birth by doctors but that there’s ‘so much more’ to the issue than genitalia. ‘Some women have penises and some men have vaginas,’ they said 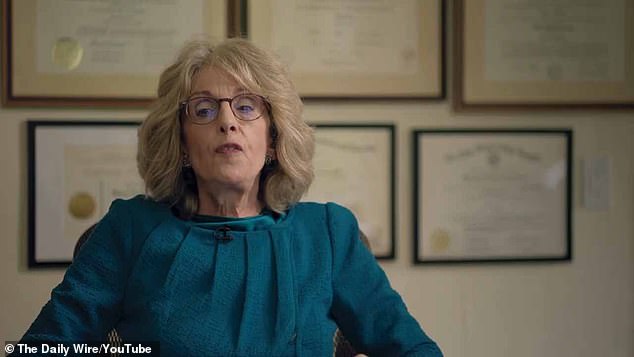 Dr. Miriam Grossman spoke of the dangers of prescribing kids with the drugs too early and said she’d spoken to the mother of a teenage trans girl who now has osteoporosis

When questioned about that in the documentary, Dr. Forcier tried to end the interview after admitting that she prescribed it.

‘You know what, I’m not sure that we should continue with this interview because it seems like it’s going in a particular direction.’

She told Walsh he was being ‘exploitive’ with his choice of words and was ‘malignant and harmful.’

‘I’m saying as a pediatrician when you use that terminology you are being malignant and harmful. It’s about the context of caring for a child and seeing the suffering that kids can have that have not been in affirmative home situations,’ she said. 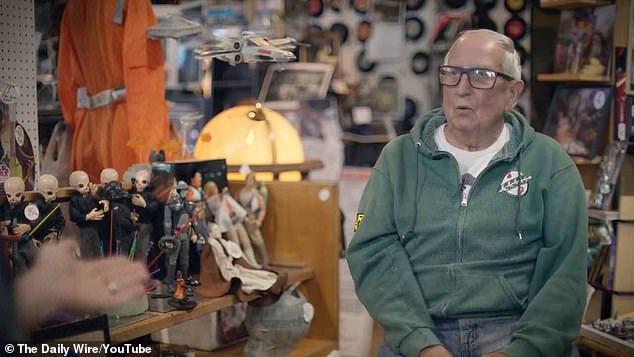 Don Sucher, the owner of Sucher and Sons Star Wars shop, says he won’t respect people’s transgender pronouns in his store. ‘I don’t care about your feelings. I’m old!’ he said

Scott Newgent is a transgender man who started transitioning from female in his forties.

He tells the documentary how he has suffered countless infections, medical problems and complications since he started hormone treatment therapy, and how he now fears he won’t live ‘very long’.

‘This is wrong on so many levels. Being a parent is loving the hell out of your kids and helping them see around corners.

‘The truth is that medical transition is experimental. We have studies saying it helps mental health with kids – they’ve all been retracted.

‘How many studies do they have on hormone blockers for children?

In the trailer for the film, he says: ‘I’m a biological woman who medically transitioned to appear like a male. I will never be a man. It got me at 42 – your child doesn’t have a chance,’ he said, referring to the wave of encouragement that kids now see on social media.

Dr. Miriam Grossman, an adult and adolescent psychiatrist, said she had spoken with a mother whose daughter developed osteoporosis as a result of the blockers.

‘I just spoke a month ago with a mother whose 14-year-old daughter was put on blockers, they discovered after two years, this girl has osteoporosis. That’s something old women get.

Later in the documentary, Walsh interviews Selina Soule, female track and field athlete who said she missed out on medals and qualifying spots when two transgender males started competing against her.

‘The first race that I competed a transgender athlete was during my freshman year. 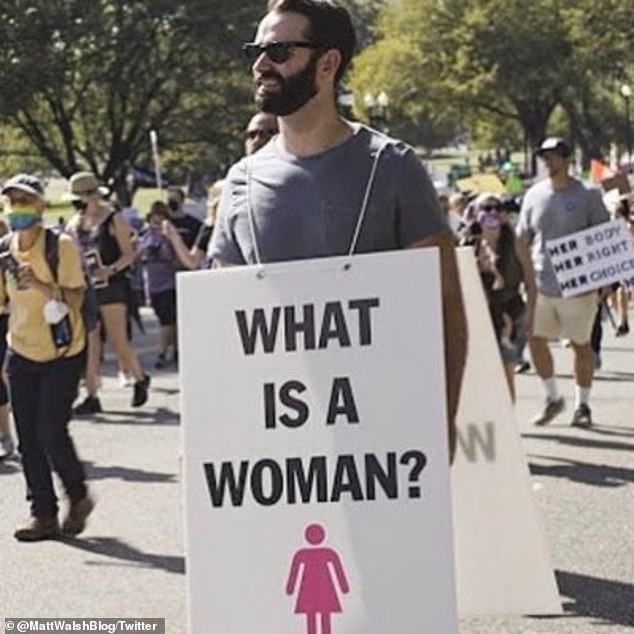 Walsh went to the Women’s March asking people ‘what is a woman?’ Many failed to answer

‘Once the gun went off, the two transgender athletes took off flying and left all of us girls in the dust.

‘Throughout all four years of high school, I was forced to compete against biological males. I only competed against them in sprinting events. Every single time, I lost.

‘I missed out on so much in my high school career. Between the two of them they won every single event they competed in.

‘It is so frustrating and heartbreaking because we elite female athletes train so hard to shave just fractions of a second off of our time. And going into races knowing we’ll never be able to win.

‘After so many losses it just gets to the point of why am I even doing this? Why am I sacrificing so much and training so hard just to get third place and beyond?’ she said. 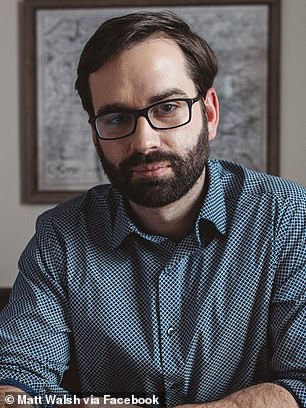 He also spoke with a University of Tennessee women’s studies professor who said it was ‘transphobic, rude and condescending’ to seek an objective truth on gender, rather than allowing people to tell you what their gender is.

He also spoke with the owner of a Star Wars store in Washington State who clashed with a transgender city councilwoman in a viral video after putting up a sign outside his store saying: ‘If you are born with a d**k, you are not a chick.’

He stood by his stance, telling Walsh he would not back down on it because he’s ‘old’.

‘One day I just put the sign up here. I said, “oh I recognize you, you’re our new city councilman”.

‘And he said, “no I’m your new city councilwoman” and it was kind of on from there.

‘I’ve never had a problem with anybody whether they’re gay, transsexual… anybody.’

‘I don’t care if you think you’re a sheepdog and you come into my store. It don’t matter to me just don’t come in and try to shove that s**t down my throat. I don’t care about their feelings. I’m old.

The full documentary airs on The Daily Wire tonight at 9pm EST.