Doctors remove a steel cup from a man's rectum in India

Doctors have removed a steel cup from a man’s rectum ten days after his friends put it up there as a drunken prank.

The 45-year-old from Balipadar, India, had the substantially sized object removed via surgery at a local hospital.

The incident, which took place on 19 August, apparently happened when the unfortunate man was out drinking with his friends at Surat in Gujarat, an Indian state which prohibits alcohol.

According to reports, the victim’s friends said they inserted the sizeable item up his rectum whilst he was in an ‘inebriated state’ as part of a ‘prank’. 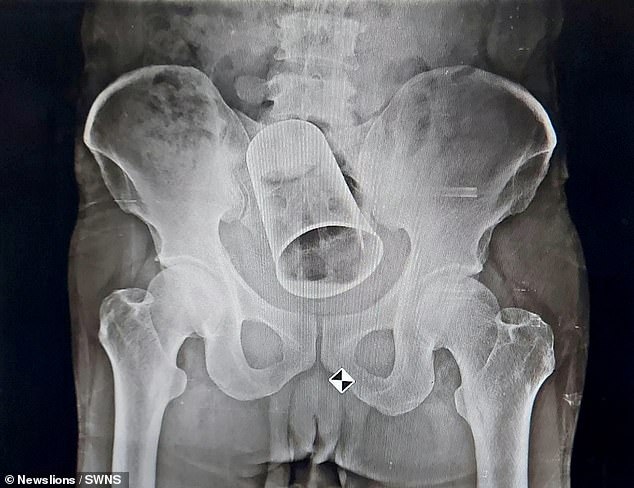 The cup, around 8cm in diameter and 15 cm long, allegedly got stuck inside a man’s rectum 10 days before surgery by friends in drunken condition after a booze party at Surat in Gujarat

His family members rushed him to hospital after they found out, said local media, who said the man did not immediately report the incident over fears of embarrassing himself.

An X-Ray at MKCG Medical College and Hospital at Berhampur city showed that the cup was found stuck in the intestine.

NDTV India said they removed the cup after 10 days when the man’s stomach started swelling as he had not defecated since the incident.

At first, the doctors tried to retrieve the cup through the rectum, but then had to resort to surgery due to the sheer size of the object.

Doctors had to cut through the intestine to finally retrieve it. The procedure took around 2.5 hours in total.

The unlucky man is recovering after the surgery and his condition is said to be stable.

He will remain in hospital for another 4-5 days under observation.