Downing Street has launched a vicious attack on Phillip Lee and accused him of ‘choosing to reject’ the result of the 2016 EU referendum after he quit the Tories to join the Liberal Democrats.

Dr Lee chose a moment of maximum drama to defect as he crossed the floor in the House of Commons to sit alongside Lib Dem leader Jo Swinson as Boris Johnson was addressing MPs this afternoon.

The Bracknell MP’s decision to resign from the Conservative Party means Mr Johnson has now lost his slender majority in the Commons.

The loss of the Prime Minister’s majority represents a significant symbolic blow to his premiership.

However, in reality it is unlikely to make a big difference in the coming days given how badly split a number of parties are on Brexit. 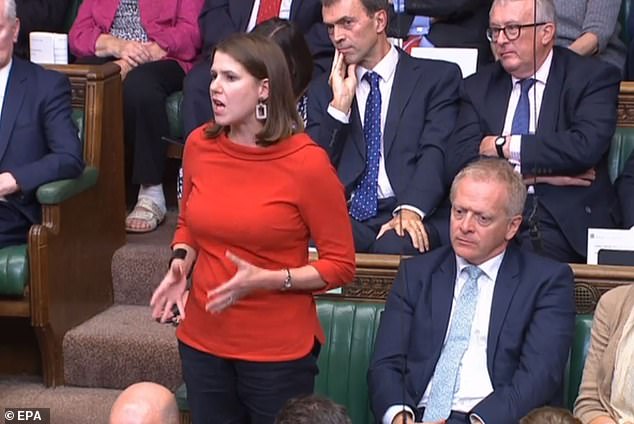 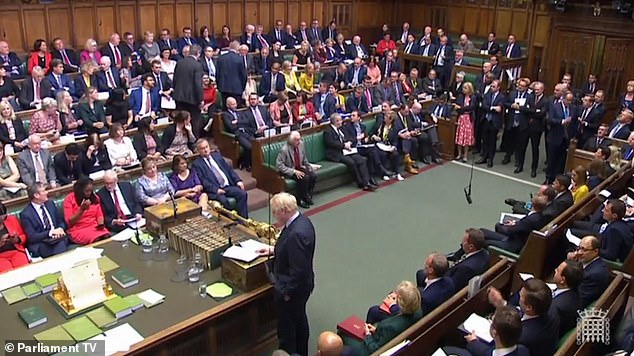 Dr Lee, MP for Bracknell, crossed the floor as Mr Johnson delivered a statement to MPs in the wake of the G7 summit

A government spokesman said that Dr Lee had written to Mr Johnson in order to resign ‘at the point that he crossed the floor’ of the Commons chamber.

The spokesman then suggested that Dr Lee’s defection was evidence that he was disregarding the result of the original Brexit vote.

The spokesman said: ‘I am sure that Phillip Lee’s constituents will be disappointed by the fact that an elected politician, who is meant to represent them in Parliament, is choosing to reject the democratic choices that they have made in 2016 and 2017.’

Asked if Mr Johnson still believed he had a majority, the spokesman said: ‘The Prime Minister is the Prime Minister and will continue to set out the Government’s negotiating position and work to secure a deal.’

He added: ‘I haven’t seen any change in the Prime Minister’s status.’

Dr Lee, a former health minister, said in a statement announcing his defection that he believed the Conservative Party he joined in 1992 no longer existed.

He said: ‘Over 27 years ago I joined the Conservative & Unionist Party led by Sir John Major.

‘Since 2010 I have had the privilege of representing the Bracknell Constituency. The Party I joined in 1992 is not the Party I am leaving today.

Who is Phillip Lee, the MP who has defected to the Lib Dems from the Tories?

A trained doctor, Phillip Lee was first elected as the Conservative MP for Bracknell at the 2010 general election.

For the majority of his political career he has enjoyed a relatively low public profile.

But the Brexit vote in 2016 has seen him become an increasingly vocal critic of leaving the EU and a prominent supporter of the campaign for a second referendum.

He voted to Remain in 2016 but was made a junior health minister in the new administration formed in the immediate aftermath of the EU referendum.

However, he quit his role in June 2018 because of his opposition to Theresa May’s Brexit policy.

Since then he has been repeatedly named as a potential defector from the Tories.

Speculation that he could quit the party reached a fever pitch earlier this year as a number of Tory and Labour MPs quit their former parties to form Change UK.

But Dr Lee opted to stay put as he appeared increasingly at odds with the Conservative Party’s direction on the question of Europe.

His decision to join the Lib Dems will not have surprised anyone on the Tory benches especially given a recent falling out with his local Conservative association.

The married 48-year-old lost a non-binding vote of no confidence in his Bracknell association in June this year because of his Brexit stance as local activists made clear they wanted him out.

His decision to leave the Conservative Party ends his 27-year relationship with the Tories. He first joined in 1992.

He secured a more than 16,000 vote majority in his Bracknell constituency in 2017 as the Tory candidate which suggests he will face an uphill task if he is to be re-elected as a Lib Dem.

He worked as a doctor at various hospitals across London and the South East before becoming a GP in the Thames Valley area.

He continues to practise locally on a part-time basis.

‘This Conservative Government is aggressively pursuing a damaging Brexit in unprincipled ways.

‘It is putting lives and livelihoods at risk unnecessarily and it is wantonly endangering the integrity of the United Kingdom.

‘More widely, it is undermining our country’s economy, democracy and role in the world. It is using political manipulation, bullying and lies. And it is doing these things in a deliberate and considered way.’

Dr Lee said he believed the Lib Dems were ‘best placed to build the unifying and inspiring political force needed to heal our divisions’.

She said: ‘He brings almost 10 years of Parliamentary experience and decades of professional expertise.

‘He shares our commitment to prevent a disastrous No Deal Brexit, and to stop Brexit altogether.

‘The Liberal Democrats are growing. Phillip follows both Chuka Umunna MP and Sarah Wollaston MP in bravely crossing the floor to join us.

‘Today, we also welcome Jane Dodds MP to Parliament, following her recent victory in Brecon and Radnorshire. And these representatives join over 30,000 new members, who have joined the Liberal Democrats since our best ever results in the European Elections in May.’

The Lib Dems finished a distant third in the constituency in that election with Labour in second place, suggesting the MP will face an uphill battle if he is to keep his seat at a potential snap general election in the coming months.

Dr Lee’s defection will have come as little surprise to many on the Tory benches. He campaigned to Remain in 2016 and has since become a vocal critic of Brexit and a leading supporter of holding a second referendum.

Meanwhile, he lost a non-binding vote of no confidence at his local Conservative association earlier this year because of his Brexit stance.

Prior to Dr Lee’s defection the PM had an effective majority of just one MP.

Dr Lee switching sides makes it a minority government – although the premier can also rely on the support of Charlie Elphicke, who is currently suspended from the Tory whip.