No shortage of RAIN! Downpours will drench Britain today with brutal 69mph winds sweeping from west to east… with showers to last for rest of week

Heavy rain and ferocious winds are set to lash Britain today and continue for the rest of the week – with temperatures below average.

With summer well and truly over, western Scotland, Wales and north-west England are expected to be the wettest areas with the rain moving eastwards throughout the day.

For the rest of the week, some areas will experience up to 25mm of rain a day, most likely in eastern Scotland and eastern England, while most people can expect between 10-15mm of rainfall.

On Wednesday, north-west England and south-west Scotland could see up to 30mm of rain in just 12 hours.

Meanwhile, winds are expected to reach highs of 69mph on Wednesday in the east of England and the whole of the UK will experience winds averaging 35mph until the weekend.

The rain chaos is part of a potential seven-day downpour with ‘cyclonic’ conditions that could last into October, bringing largely unsettled conditions across the country.

Met Office spokesman Stephen Dixon said: ‘Tuesday in particular there’s a band of heavy rain moving into the south west of the UK, the South East will hold on to the drier conditions longer but this band of rain moves eastward across the UK.’ 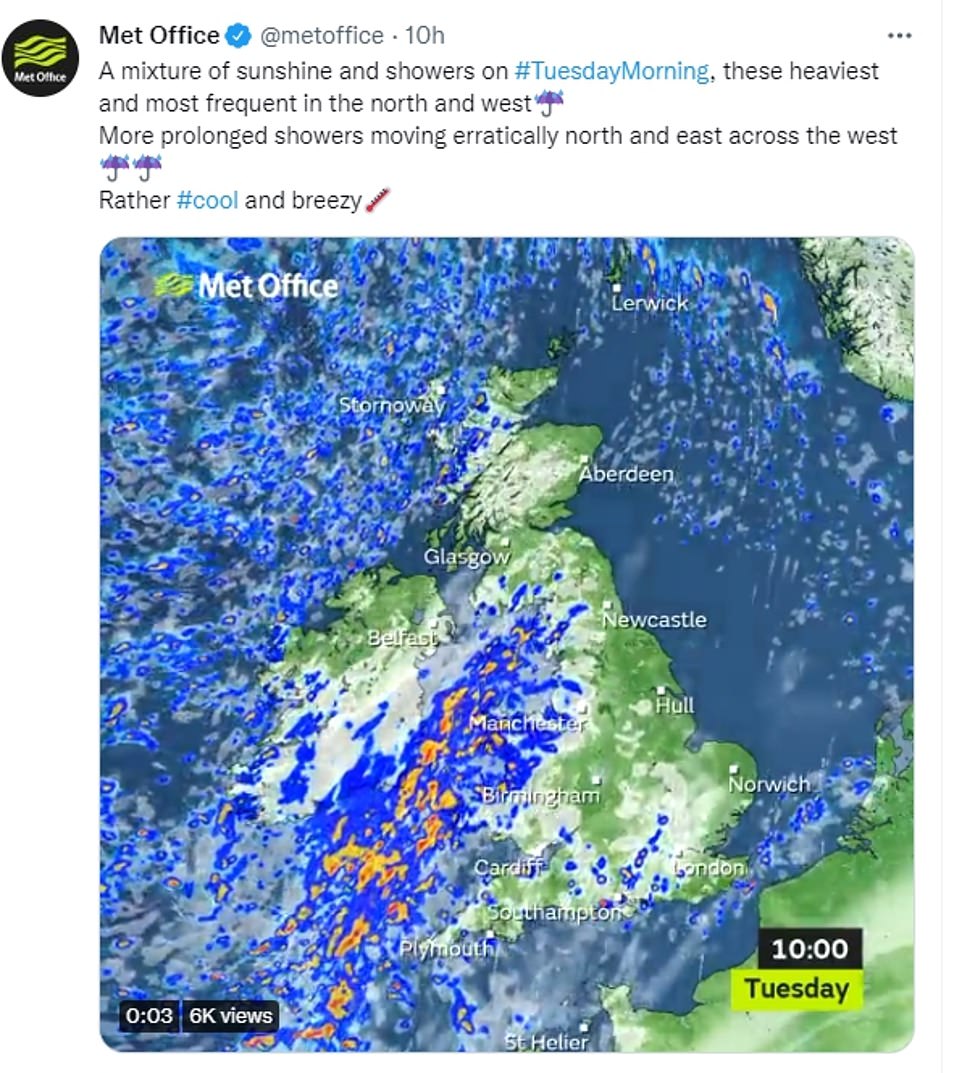 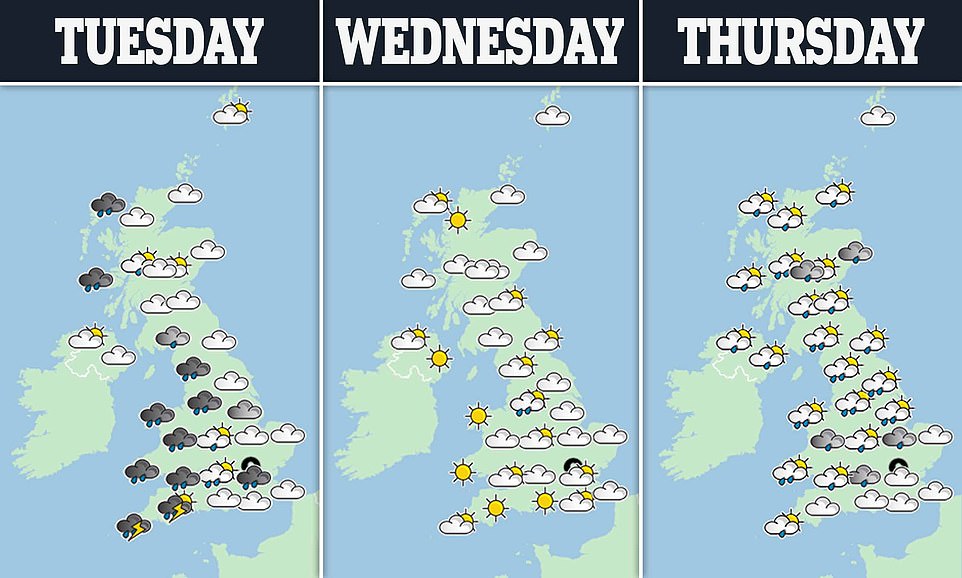 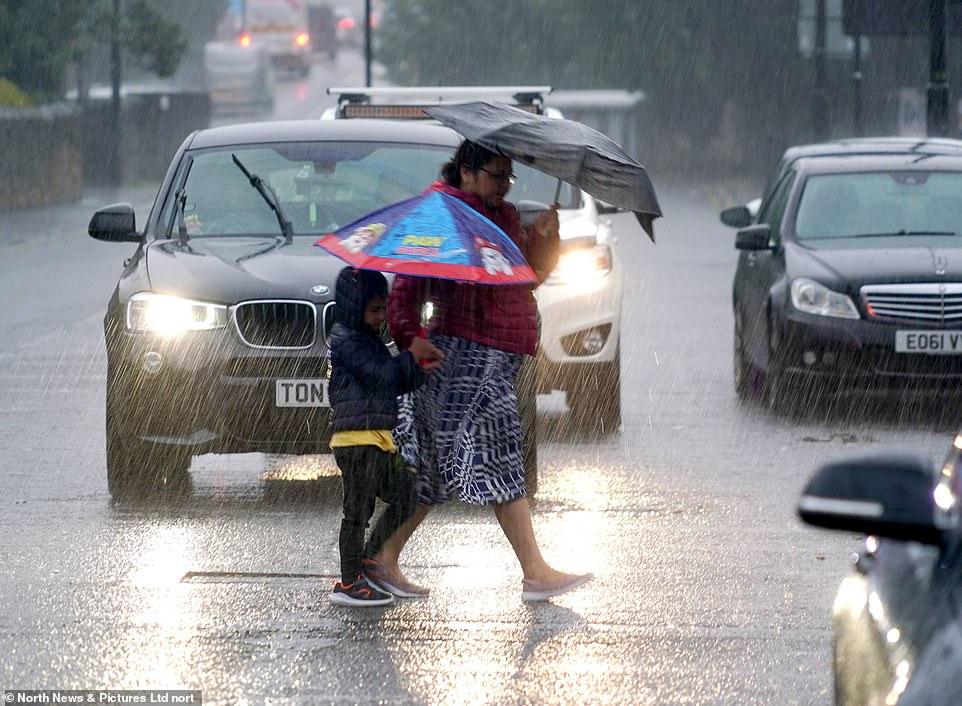 Commuters caught out in the torrential rain lashing North Tyneside yesterday morning, with more heavy rain on the way 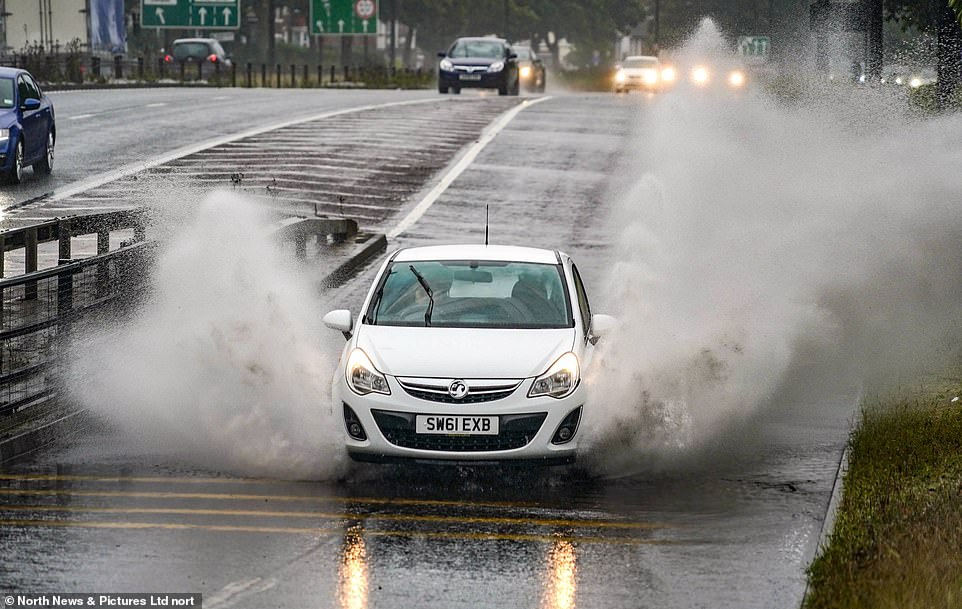 He added: ‘There is a low pressure system developing to the north west of the UK which at the moment is on track to bring some showers into Northern Ireland early on Thursday, and the west coast of Scotland.

‘In addition to that, continuing strong winds for most of the week, especially in coastal areas and heading into the weekend.

‘That theme continues as that low pressure system shifts around in the north of the UK, bringing showery conditions for most through the weekend.’

There will be a general mix of sunshine and showers throughout the week, but temperatures will be lower than last week when the south of England reached the high 20s.

The change in the weather is down to a shift in the position of the jet stream, with a cold front associated with a low pressure system in the North Atlantic spreading eastwards.

The heavy rain is set to start early this morning and continue across much of England and Wales during the evening.

Overnight, showers will continue for a time before easing and clearing from the west.

Tomorrow, early outbreaks of rain across eastern areas will soon clear. It will then be a drier and brighter day with spells of sunshine.

The unsettled weather will return on Thursday with outbreaks of rain spreading eastwards during the day before turning heavy and persistent.

Friday will bring another wet day with thick cloud cover and spells of rain which will be heavy and persistent in the south.

Jim Dale, meteorologist for British Weather Services, said: ‘We are about to see a big change, and after the milder weather we have seen through September, autumn is about to break down the door.

‘Low pressure from the Atlantic will move in next week with plummeting overnight temperatures next week bringing a small chance of frost to the highlands of Scotland.

‘We are watching out for fireworks in October which threatens a particularly active season of storms and ex-hurricanes coming in from the Atlantic.’

Mr Dale added: ‘I would expect a pattern of stormier weather to start revving up in October.

‘The jet stream is about to move south and this will bring more of an influence form the northern Atlantic.

‘Summer ended with a soft landing thanks to an extended mild weather in September, but October threatens a very different scenario.

‘This is something to keep our eyes on and it is a case of watch this space.’

As the weekend approaches, periods of heavy rain are expected in northwestern areas, with gale force winds in the far north at times.