A police officer was dragged 300 yards by a car as he attempted to detain suspects over a drugs offence.

West Midlands Police is appealing for witnesses after the neighbourhood officer and a colleague were hurt when they tried to speak to the occupants of a Vauxhall Astra on Lichfield Road, Walsall, at 2.40pm on Saturday.

The car lurched backwards during the incident and knocked a female officer over, while her male colleague leaned inside to try and grab keys from the ignition.

The car was then driven off with the officer partially inside the vehicle until he eventually jumped free from the Astra and escaped with minor injuries. 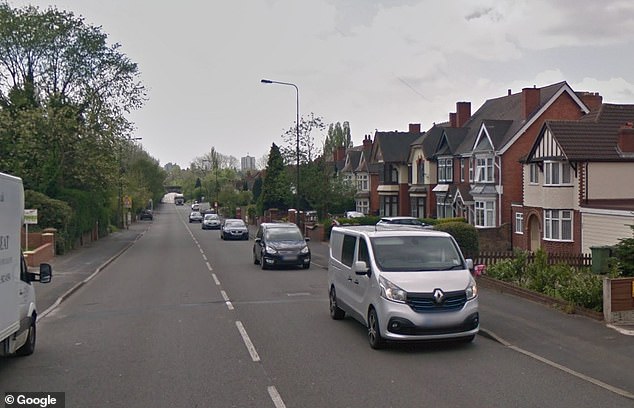 The incident happened on Lichfield Road, (pictured) in  Walsall, at 2.40pm on Saturday

A 28-year-old man was arrested at the scene on suspicion of obstructing police but was later released with no further action, while a man aged 37 detained on suspicion of assault was released pending further inquiries.

Officers are appealing for any witnesses or anyone who may have any dashcam footage.

The car, with the registration SE07XLV, has not been recovered.

Superintendent Kim Madill, from Walsall police, said: ‘This is a shocking incident which occurred when officers were just trying to do their job.

‘Fortunately, I’m pleased to say their injuries aren’t serious, but it could have been much worse and it’s completely unacceptable for our officers to be injured in the line of duty.

‘I’d urge anyone who saw anything or anyone who has any information to contact us as soon as they can.’

The incident follows others in Coventry and Birmingham in September and August in which officers suffered life-threatening injuries when they were struck by cars which failed to stop.

PC Gareth Phillips was knocked down and driven over while trying to arrest a suspected car thief after tracing a stolen vehicle to Moseley in Birmingham this August.

He suffered a broken pelvis as well as head, abdominal and other internal injuries and underwent surgery.