Singapore: After the dramatic pre-election positioning, the substitution game in the Philippines is finally over.

The soap opera, however, is only just beginning. 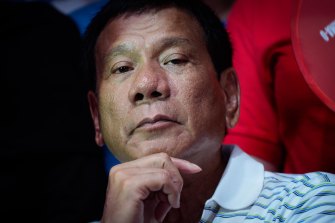 The lead-up to next May’s vote promises to have no shortage of further twists and turns as family dynasties and personality politics come to the fore in the south-east Asian nation again.

Polls show Ferdinand “Bongbong” Marcos jnr, the son of the late dictator, is the clear frontrunner to succeed Rodrigo Duterte, a victory that would return his family to the Malacanang, the presidential palace, 36 years after they were forced into exile by people power.

He now also won’t have to contend with Duterte’s daughter, Sara Duterte-Carpio, as a presidential rival and may indeed have her on board as an ally after she instead entered the race for the vice-presidency on the weekend.

In a dramatic lead-up to the entry deadline, she quit her bid for re-election as mayor of Davao City, promptly joined a different party and threw her hat in the ring for national office. 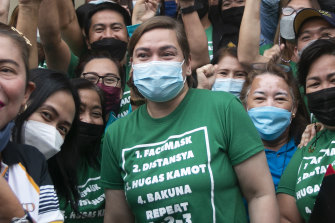 Sara Duterte-Carpio had led presidential polls but has opted to run for the vice-presidency.Credit:AP

The country then held its breath on Monday in anticipation that Duterte, who can’t seek a second six-year term under the constitution, would himself take a shot at the vice-presidency, competing directly against his daughter.

In the end, the 76-year-old refrained from that, instead filing an 11th-hour candidacy for the senate.

Ferdinand “Bongbong” Marcos jnr is emerging as the top candidate of the presidential right.Credit:AP

Political observers, though, have condemned the “circus-like” late scramble as being against the spirit of the country’s constitution.

While the cut-off for nominations was October 8, candidates could be parachuted in as replacements until Monday, creating a game within a game as intentions were concealed until the last minute.

It was a tactic that Duterte himself deployed before his successful campaign for the presidency in 2016 but Richard Heydarian, a political scientist at the Polytechnic University of the Philippines in Manila, said such moves made a mockery of the political system.

He believes there are real questions about whether Duterte’s substitution stunt five years ago should have been allowed and argues the continued use of the ploy reflects a culture of impunity that has prevailed under his presidency.

“The reason it’s messy is the Dutertes are not unified in backing the Marcoses and the incumbent wants someone else to run for the presidency,” Heydarian said.

“And we’re having this mess because Duterte was allowed to get away with so much over the last few years.“

Votes are cast separately for president and vice-president in the Philippines and without his daughter in the hunt for the top job, Duterte hopes to rally support for “Bong” Go.

Protecting himself from prosecution over investigations into his deadly war on drugs is a major factor in Duterte taking on Marcos jnr, Heydarian argues.

“He cannot trust the Marcoses to 100 per cent have his back should they come to power,” he said.

“He doesn’t want to be a curtain-raiser for the return of the Marcoses.

“If he cannot get his daughter to [run for president], he’s fielding his protege to do that.”

Edmund Tayo, a political analyst and former Duterte appointee to review the constitution, believes the spectre of International Criminal Court and domestic probes into thousands of extra-judicial drug killings are only part of the equation.

“I think it is out-and-out hubris on the part of those who are in power, thinking they have all the power in the world to just decide for 110 million Filipinos,” he said.

“All this absurdity is very much reflective of the weakened political process that we have in the country. I’m not even sure whether the word mockery cuts it.”

The 64-year-old’s candidacy has upset victims of his father’s 14-year-long martial law. He also faces an attempt to have him disqualified over a conviction in the 1990s for failing to pay income tax.

Should he survive that, though, the cast for next year’s elections is now complete.

“And only person who can replace him or her is someone who has the same surname.“