Dysfunction, police, a mansion in ruins: What’s going on at Ivanhoe RSL?

For five years the stately, century-old mansion once occupied by the Ivanhoe RSL has been a fenced off ruin.

The heritage-listed Queen Anne-style building on Studley Road, known as ‘Clairvue’, was gutted by fire a few days before Anzac Day, 2017. It has remained untouched since, without repair or restoration.

As the building languishes, so does the club that occupied it for more than 60 years. The Ivanhoe RSL sub-branch has been plagued by a dysfunctional committee with high turnover and now, The Age can reveal, a police investigation. 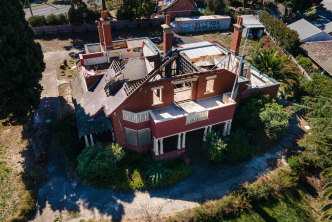 The Ivanhoe RSL, pictured this week, still in ruins after a 2017 fire.Credit:Eddie Jim

An RSL member who is not authorised to speak to the media said the situation at the club was “terrible”. Another said, “it’s an absolute mess”.

A spokesperson for Victoria Police confirmed Banyule Crime Investigation Unit detectives are investigating the alleged misappropriation of funds from the sub-branch in November 2020.

“As the investigation remains ongoing it would be inappropriate to comment further,” the spokesperson said.

Police have not said who they are investigating and The Age does not suggest that their inquiries are targeting any particular individual. 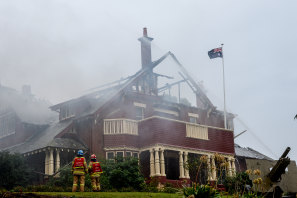 A fire in April 2017 gutted the century-old mansion that housed Ivanhoe RSL.Credit:Justin McManus

The committee has been paralysed by dysfunction for years.

On September 18, 2020, RSL Victoria’s then-CEO Jamie Twidale chaired an online meeting of Ivanhoe RSL office holders. The minutes of the meeting, obtained by The Age, concluded the committee decided it was “not able to function.”

The minutes noted that committee members had written to head office with complaints about the management of the sub-branch.

A motion was carried to hold an extraordinary general meeting to elect a new committee. 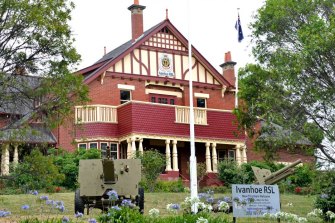 At that subsequent meeting, held in November 2020, Vietnam War veteran John Beezley was voted out as Ivanhoe RSL president.

Dennis Baker was voted in as president but resigned in April 2021. Dino De Marchi has been acting Ivanhoe RSL president for the past year.

Mr De Marchi, a former member of the elite Special Air Service and a Vietnam War veteran, was convicted in 2017 of professional misconduct as a lawyer for including himself as a beneficiary in a client’s will.

Mr De Marchi told The Age that issues preventing the Ivanhoe RSL rebuilding included “lack of co-operation within the committee”, legal issues and past committee members’ failure to provide documents relating to the insurance claim and to the appointment of trustees.

He said the bulk of the insurance claim from the fire hadn’t been paid out because the company preparing the sub-branch’s claim was still processing it, and it was a “complex case”.

Mr Beezley said the current owner of the Ivanhoe RSL is a trust called The Ivanhoe Soldiers Memorial Hall Fund. Mr Beezley is the chairman of the trust.

A land title search of the Ivanhoe RSL site shows that the current “joint proprietors” of the land are John Beezley and Mathew Roy Keene. Mr Keene, a former soldier who served in Iraq, is active in the Young Veterans support group.

Law Institute of Victoria property specialist Simon Libbis said that land titles did not have provision to name trusts as owners, and so one way for an organisation without a corporate structure to hold land was to name some of its members on the title to hold on trust.

The members would then draw up a deed of trust where they declared they were holding land on trust for the organisation. He said such a deed is not publicly available.

Mr Beezley said when he became president of Ivanhoe RSL, a priority was re-establishing the sub-branch’s trust, which hadn’t been attended-to “for decades”.

“The trust matter has proven to be a major hurdle in the reconstruction program. There are still some trust matters that are being attended, to which will then enable the rebuilding to commence.”

A spokesperson for RSL Victoria said the rebuilding of the Ivanhoe headquarters “is a matter for the trustees of the property, and questions regarding this matter should be directed to them”.

“RSL Victoria was made aware that Victoria Police had been asked to investigate certain matters at the Ivanhoe sub-branch,” the statement said.

“If any of our sub-branch network had concerns regarding the appropriateness of any aspects of sub-branch operation, it is wholly appropriate that they raise these to the relevant authority or body of oversight.”

Regarding Ivanhoe RSL’s rebuilding, Mr De Marchi called for parties involved to meet and “put all the documents on the table” and get the process moving.

“If we could bring people together and start discussing how rebuilding can go ahead, that would be good for the RSL overall, for the local members and for the community generally.”

Fire Rescue Victoria said that investigators for its predecessor organisation, the Metropolitan Fire Brigade, found that the 2017 fire had been caused by an electrical fault in a ceiling fan in the RSL’s change rooms.