London: British researchers say there is growing evidence that the full two courses of existing vaccines will “clobber” the more transmissible strains of COVID-19 – a development that could help unlock international travel and help relieve millions from lockdowns.

The emergence of strains in countries with major coronavirus outbreaks, including Britain, Brazil and South Africa, have led to further international travel restrictions and measures. Governments have feared the strains would be resistant to the vaccines that were designed before their discovery.

This week the Australian government extended the international border closure by another three months, citing the more transmissible strains that had emerged overseas. 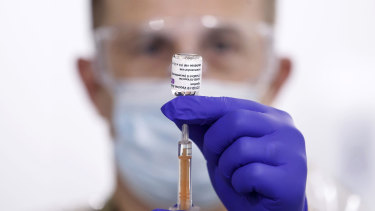 A military medic prepares a dose of coronavirus vaccine in Leeds, England.Credit:AP

Britain has also introduced hotel quarantine for travellers from countries where the strains are prevalent and stopped recreational international travel.

Professor Tim Spector, from King’s College London and principal investigator with Britain’s ZOE COVID Symptom study – where millions of Britons log their symptoms and vaccine side effects – told an online webinar that early fears about the variants’ resistance to vaccines may prove to be unfounded.

“There’s been some more reassuring data showing that once you’ve had the second dose it really clobbers all the variants, we just need time to show that,” Professor Spector said. 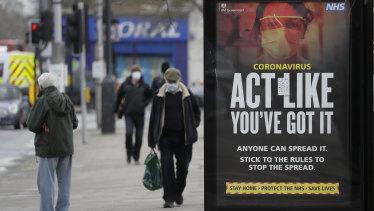 A sign at a bus stop in West Ealing in London reminds passersby to beware of spreading the virus. Credit:AP

Ellie Barnes, a Professor in Hepatology and Experimental Medicine at Oxford University and member of the UK Coronavirus Immunology Consortium, said there was data showing the jab worked well against the South African variant, but only after the second dose.

“We’ve got Oxford data which basically shows that after one dose your antibody titre [concentration] is not so high – it’s high but it’s not super high – and that is not enough to neutralise the South African [variant],” Professor Barnes said.

“After you give the second dose you get really robust neutralisation of the South African variant, so I think we can be reassured of that.

“And even after a single dose the data from these vaccines in South Africa itself shows a single dose prevents you from hospitalisation and severe infection.

“But you do need the second dose to get fully protected.”

Professor Barnes said the same outcome was likely against the Brazilian variant, which is similar to the strain that emerged in South Africa.

She said the next generation of COVID-19 vaccines would be specifically designed to counteract the South African variant and said she was not sure that annual vaccines would be required, as has been previously touted.

“There’s only so many mutations a virus can make before it’s no longer able to infect cells, its unlikely to go on indefinitely,” she said.

“SARS-CoV-2 is not the same as influenza, I’m not sure we’ll need vaccines every year, we’ll see, time will tell.”

Professor Barnes said there was emerging data to support anecdotal reports of people who had previously had COVID-19 experiencing stronger side-effects to the vaccine.

She said this was because the body’s T-cells were activated by the COVID-19 infection and their memory was able to respond “very rapidly” to vaccination.

“So if you’ve been infected before and then you get a first dose of vaccine, you have a really excellent response to that single dose comparable to someone that wasn’t infected before and was on their second dose – that’s the data that’s just coming out in pre-prints,” she said.

She said it was for this reason that it is recommended people wait one month after being infected with COVID-19 to receive their vaccine.