Half-term holiday hell: HUGE queues at Gatwick with 30,000 passengers stranded as easyJet cancels hundreds of flights – just as schools break up for May week off

More than 30,000 easyJet passengers have now been affected by hundreds of flight cancellations on the eve of the half-term holidays following an IT crash that has left the holiday plans of Britain’s families in the lurch.

The budget airline cancelled a further 14 flights to and from London Gatwick Airport today after calling off more than 200 yesterday in the latest blow for an industry struggling to ramp up again following the pandemic.

The plans of Liverpool football fans hoping to reach the Champions League final against Real Madrid in Paris tomorrow were also thrown into chaos after flights to the French capital were axed from Manchester and Bristol.

Other fliers suffered more than 360 delays with routes such as Belfast to Corfu and Liverpool to Dalaman also affected by the chaos, which now poses a threat to families’ half-term holidays if the issue reoccurs.

Those jetting off from Gatwick, Bristol and Manchester airports have been among the worst hit, with travellers describing scenes of chaos during and either side of the two hours when the IT failure hit yesterday afternoon.

Travel expert Simon Calder told ITV’s Good Morning Britain: ‘Passengers who woke up this morning, early flights to places like Milan and Mallorca, we’ve seen another 14 cancellations of flights to and from Gatwick Airport. 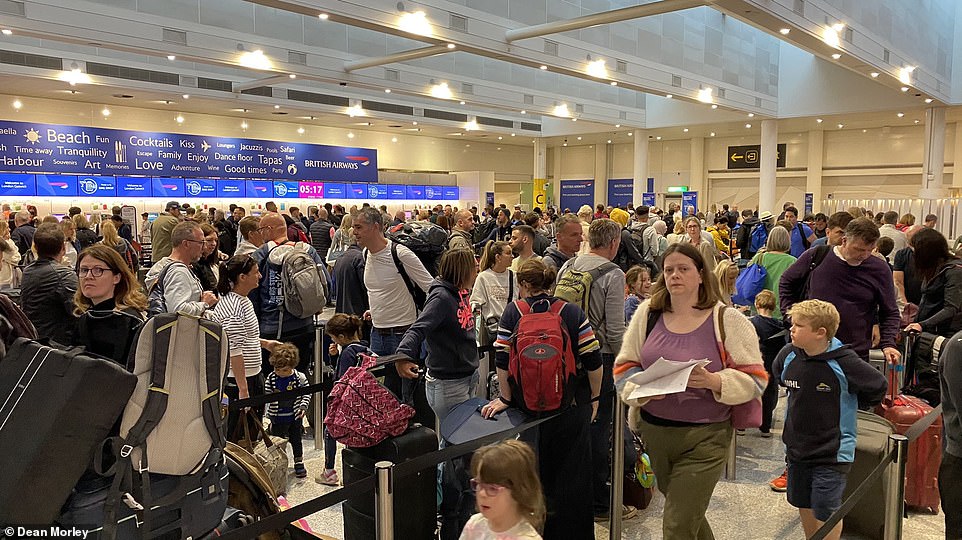 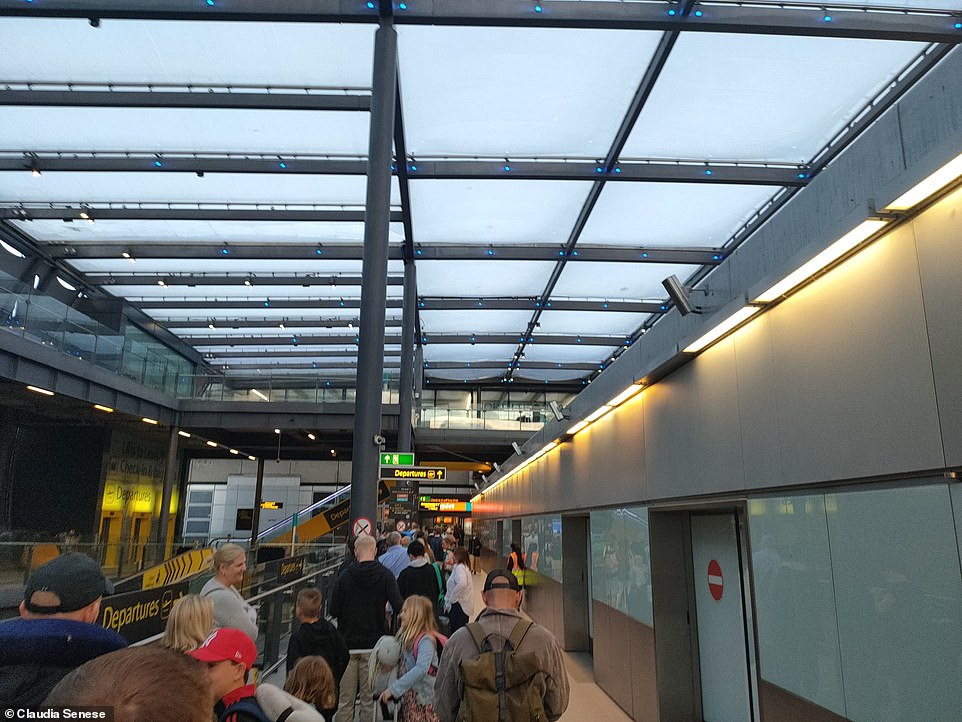 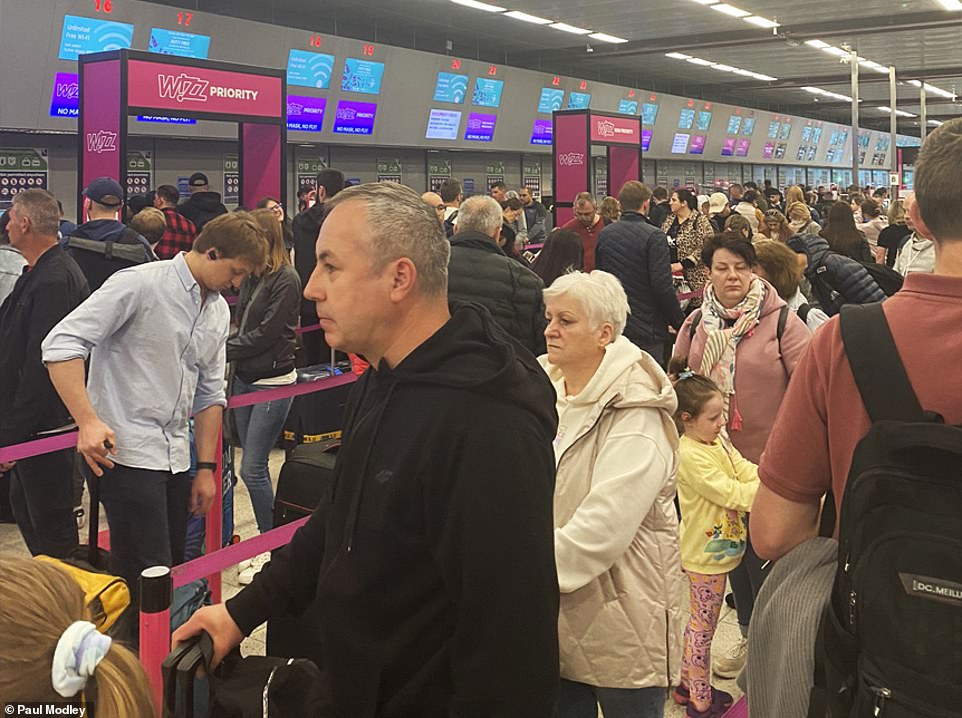 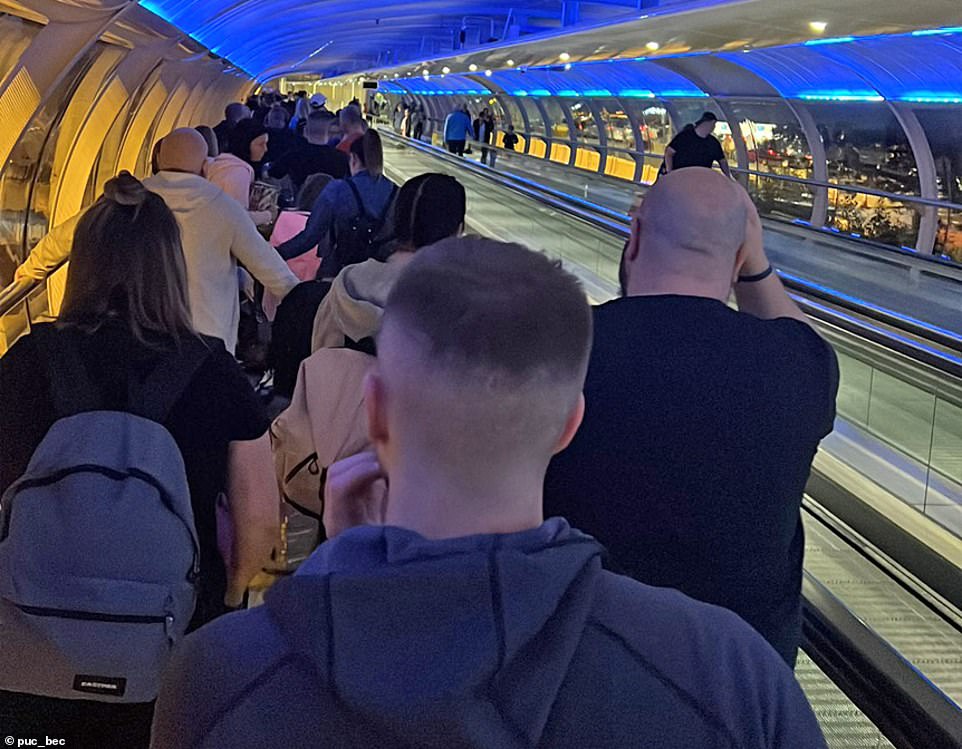 ‘That’s on top of 200-plus flights cancelled because of the IT glitch yesterday which means a total of 30,000 easyJet passengers waking up this morning not where they wanted to be at all.

‘Lots of pressure on finding seats and ways of getting people where they want to be. Not least there were some really long-haul cancellations – for example Belfast to Corfu, Liverpool to Dalaman, Gatwick to Hurghada in Egypt.

One holidaymaker caught the moment a frustrated WizzAir pilot ranted over the tannoy while they were stationary on the runway of Gatwick Airport during a reported seven-hour-delay.

‘I don’t need this!’, he told the exhausted holidaymakers, who were stuck in their seats waiting to set off to their destination of Larnaca in Cyprus.

Passenger Hannah Mace filmed the moment in disbelief and uploaded the video to TikTok.

‘We’re doing everything we can. If you want to get off, I’ll let you off, no problem.’ 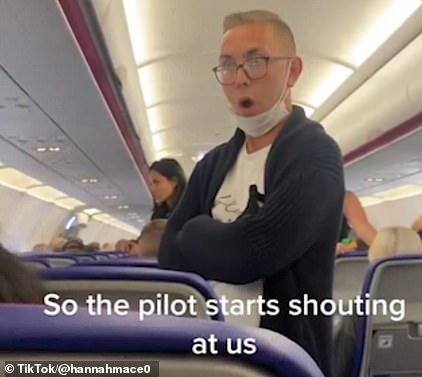 ‘So, the airline has to find an alternative flight or people will need to book themselves on other airlines. EasyJet really has to try to get you there, and of course pay for hotels and meals while you’re waiting. On top of that, cash compensation.’

He added that London Heathrow was ‘very, very calm’ this morning, adding: ‘That’s partly because British Airways has cancelled more than 120 short-haul European and domestic flights today. But those passengers were warned at least a week or two ahead, so at least they’ve been able to make alternative arrangements.’

There was confusion yesterday when easyJet suggested it would not be giving customers compensation because the IT failure – which began affecting flights from about 1pm yesterday – was not its fault.

It told customers the failure was ‘outside of our control and is considered to be an extraordinary circumstance.’ But it later U-turned and said the statement was sent out in error.

The airline is also supposed to offer alternative flights, even if with a rival carrier, to get travellers to their destination as soon as possible. Any hotel and meal bills paid for as a result should also be reimbursed.

However, airlines only need to give compensation if they were at fault.

British Airways and easyJet have both been removing thousands of flights from schedules due to staff shortages in recent months. The airlines say the vast majority of travellers were given at least a few weeks’ notice.

This month BA announced it will have cancelled 16,000 scheduled flights by the autumn.

BA was also hit by IT issues in February that caused the cancellation of its short-haul flights from Heathrow for a morning.

The latest disruption has left holidaymakers stranded abroad and complaining about the lack of notice they were given.

Devan Lonsdale, 24, from Durham, was due to travel with eight friends from Manchester Airport for a holiday that had already been cancelled due to Covid.

‘People started walking off one by one to be told that the flight was cancelled and no replacement, so we were stuck in Manchester.

‘We’ve had to pay for hotel etc in Manchester and are now going to go back home tomorrow – (we) have looked for alternate flights to Prague and other locations for a reasonable price so we could make use of our days off work we have used, but found nothing but flights £500+ with multiple stops.

‘Only time will tell what easyJet will say and how much money we will get but we will no doubt lose money overall and a four-day holiday.’

One woman claimed that would-be passengers were told their flight had been cancelled just 10 minutes before they were due to board the plane.

Others have been stuck at some of the UK’s biggest airports, including Gatwick and Stansted.

Both Edinburgh and Luton have seen seven arrivals and seven departures cancelled, while nine flights from Manchester have been affected.

One traveller caught up in the chaos at Manchester Airport said on Twitter: ‘Armed police everywhere, flights grounded, @easyJet not giving any information to anyone. Airport staff not sure, message keeps changing, being escorted away from the gates.

‘I don’t like to be a pessimist but I think we’re not making it to Italy today.’

Another posted: ‘Top work easyJet leaving 200 plus people stranded until Monday in Pisa due to a cancelled flight.’ A third said: ‘Thanks @easyJet for cancelling our flight from Prague to Manchester 2 hours before! 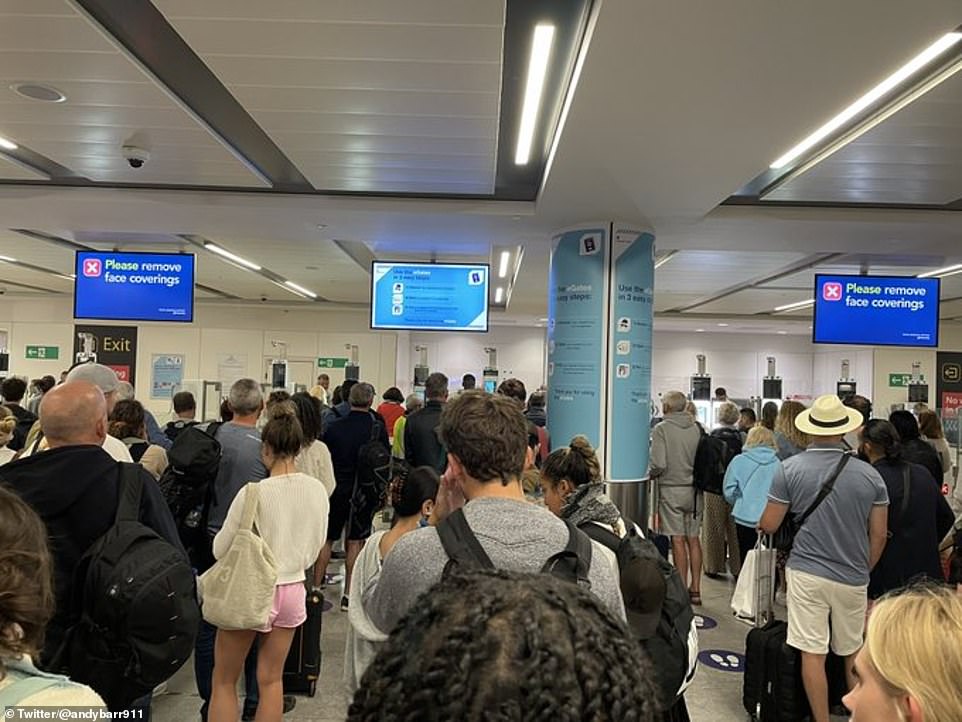 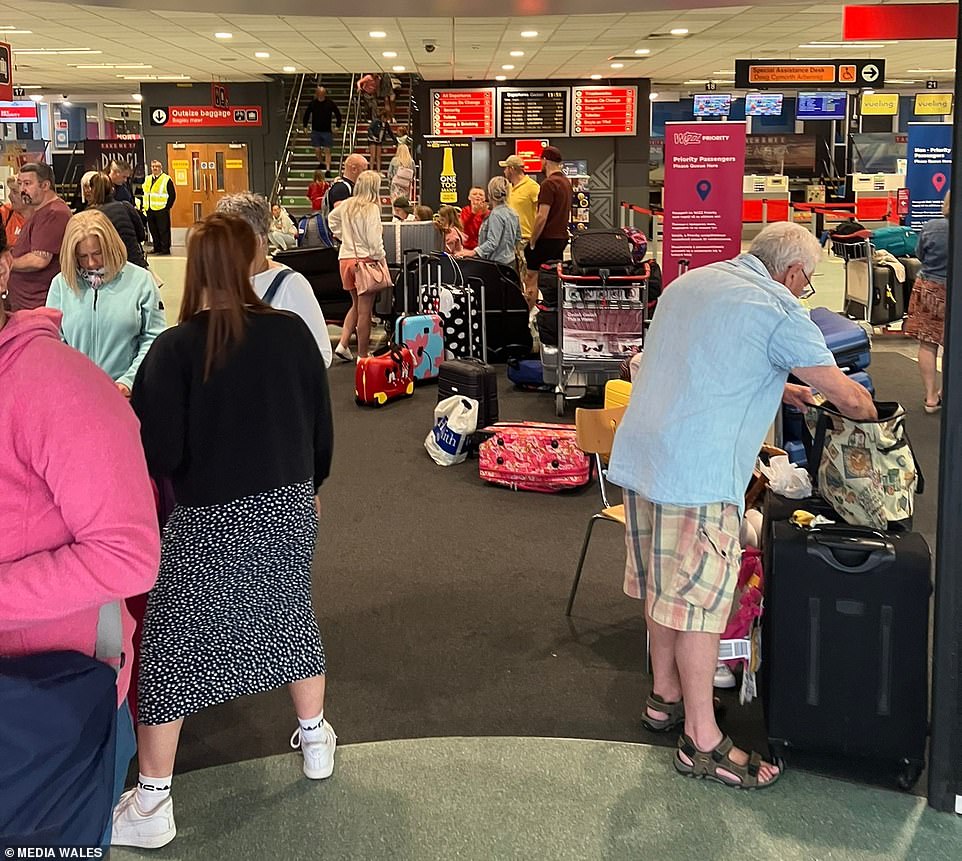 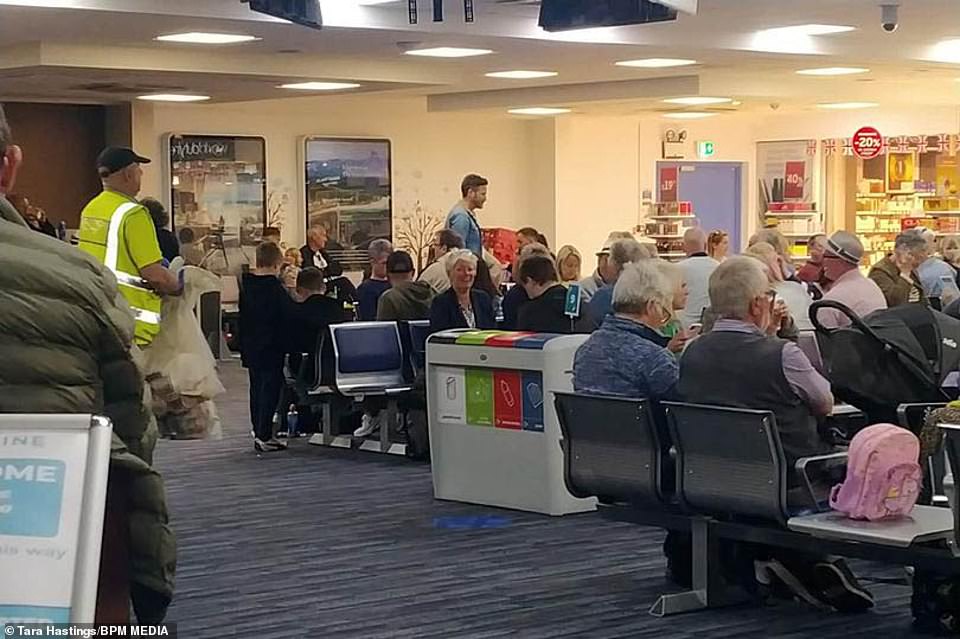 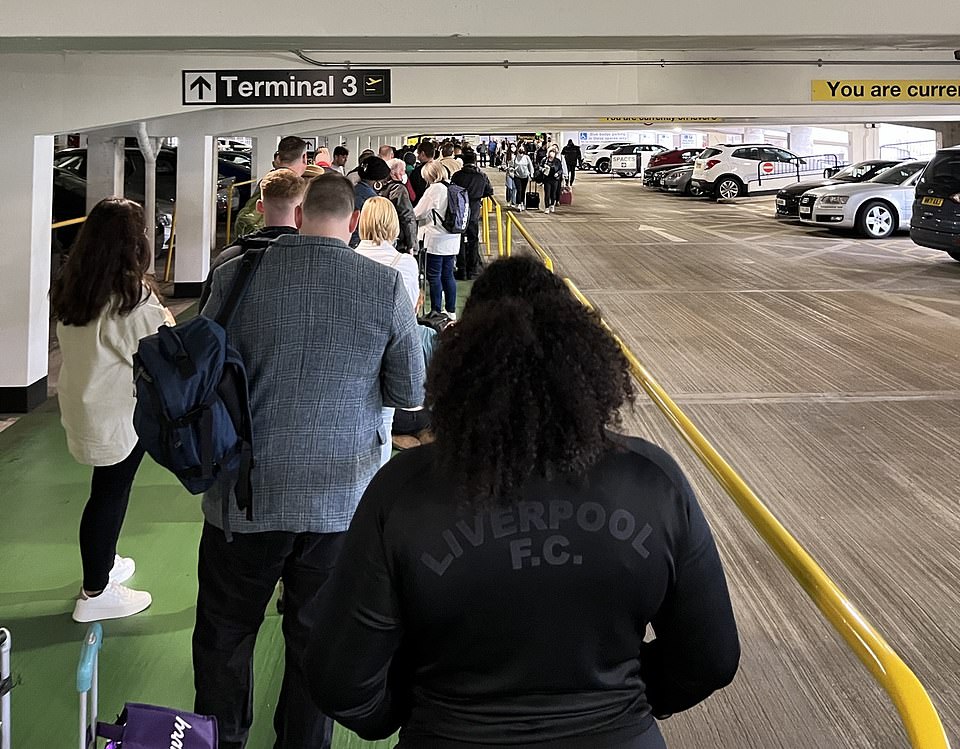 ‘We have had to pay for a hotel tonight, another flight tomorrow and all our expenses. No explanation given and zero help from ground crew!’

Rory Boland, editor of Which? Travel, said: ‘Thousands of passengers are facing huge inconvenience and many will be left out of pocket by this IT failure.

‘Unhelpfully, some passengers seem to have been advised by easyJet that this disruption is out of its control and an extraordinary circumstance, but the problem appears to be its own IT system so customers are likely to be due compensation and should lodge a claim.

‘EasyJet passengers have faced significant disruption in recent weeks, including hundreds of cancellations, and we’ve heard from passengers who complain the airline is disregarding consumer rights.

‘Passengers need an aviation regulator with improved powers to enforce these rights and the Civil Aviation Authority should be given the ability to issue direct fines on airlines when they play fast and loose with the rules.’ 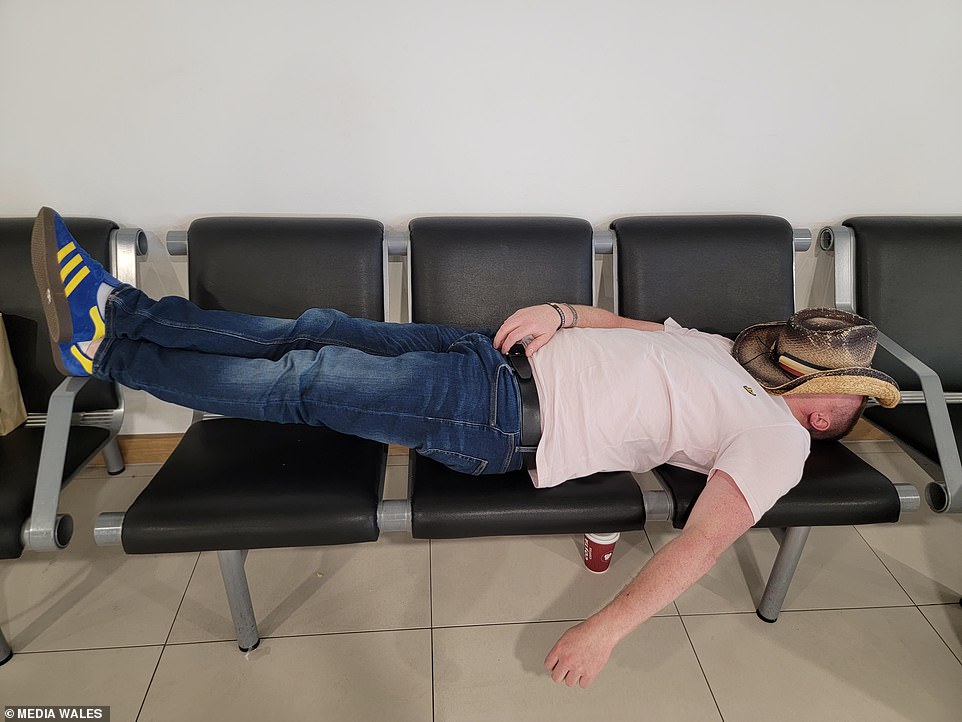 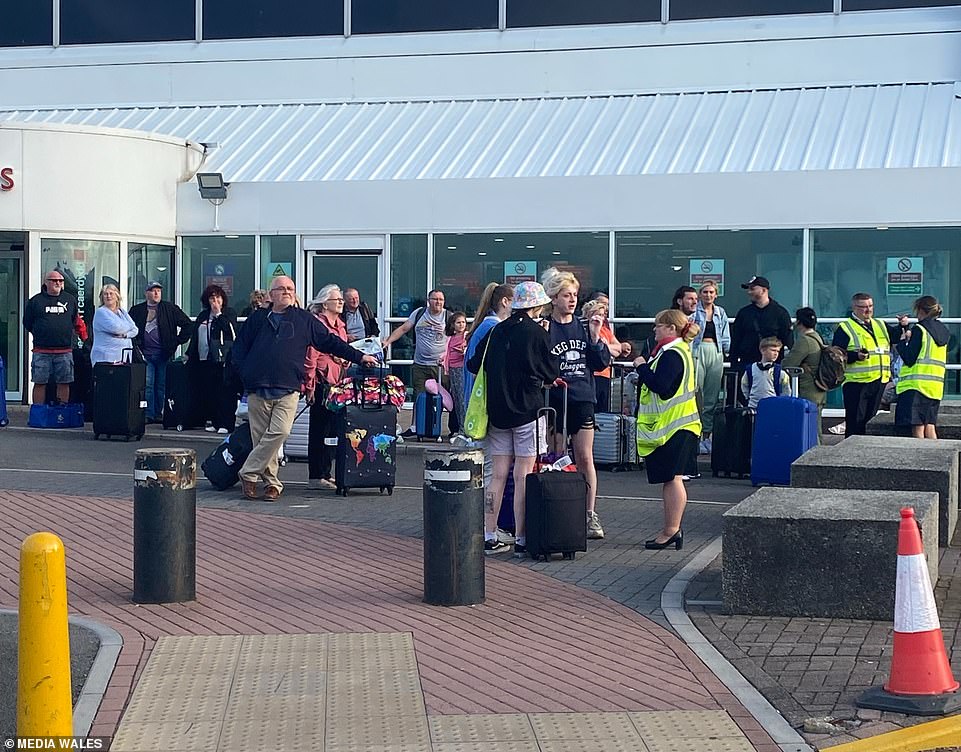 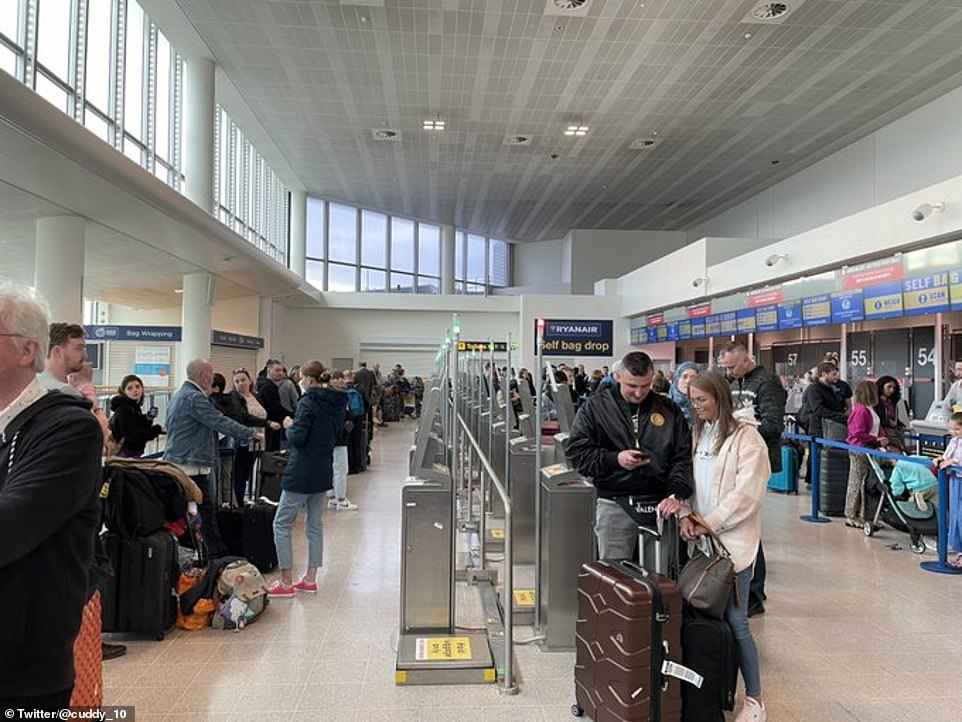 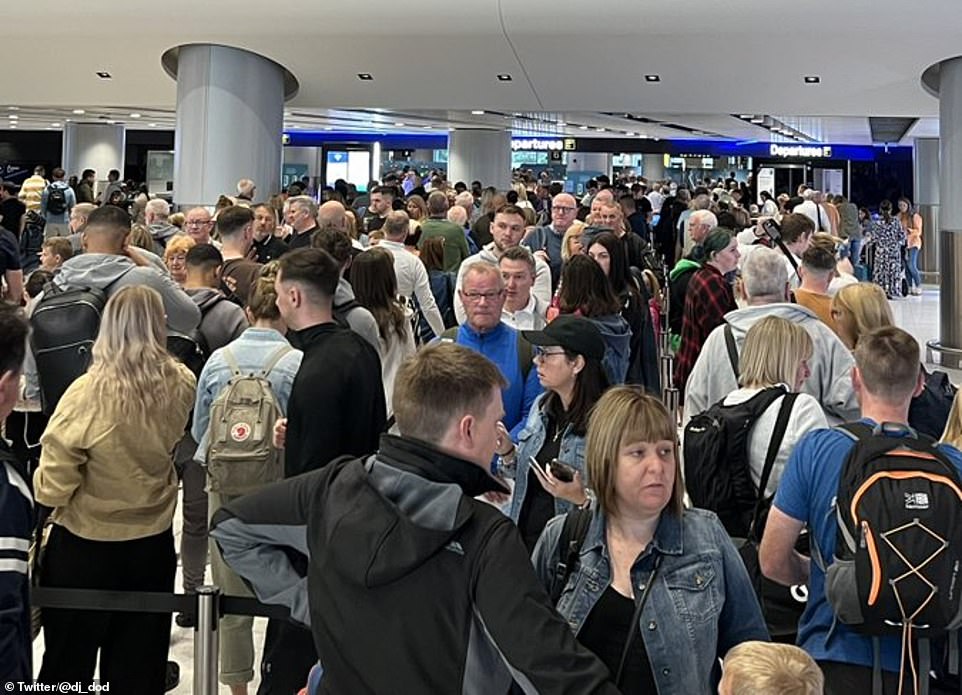 An easyJet spokesman said: ‘easyJet can confirm that the earlier IT systems issues have now been rectified.

‘Unfortunately, they resulted in some cancellations earlier today and while we expect to operate most of our remaining flying programme some may still be subject to some disruption in the coming hours.’

This month it emerged the airline was stripping seats out of some of its planes so it can fly with less crew amid a staff shortage crisis, which has also hit BA after both airlines fired thousands of staff during the pandemic.

The budget carrier has removed the back row – which includes six seats – on its fleet of Airbus A319 aircraft for the summer season.

It means these planes will be able to fly with three cabin crew rather than four as the number of seats will drop from 156 to 150.

Aviation safety rules stipulate that there must be a cabin crew member for every 50 physical seats installed on a plane. It means flights will still meet Civil Aviation Authority regulations on the required number of crew.