Bin chaos which has made Edinburgh resident’s lives a misery has spread across Scotland, as refuse collectors in other major cities including Glasgow and Dundee join the strike.

From today, staff at 13 local councils, including Glasgow, Dundee, and Aberdeen, will join those in Edinburgh and strike over a pay dispute.

The industrial action has made Edinburgh an ‘international embarrassment’ as rubbish has piled high whilst the city hosts the Fringe Festival.

Glasgow City Council has urged residents to ‘minimise the amount of waste you produce’ and ‘store your waste at home if you can’. 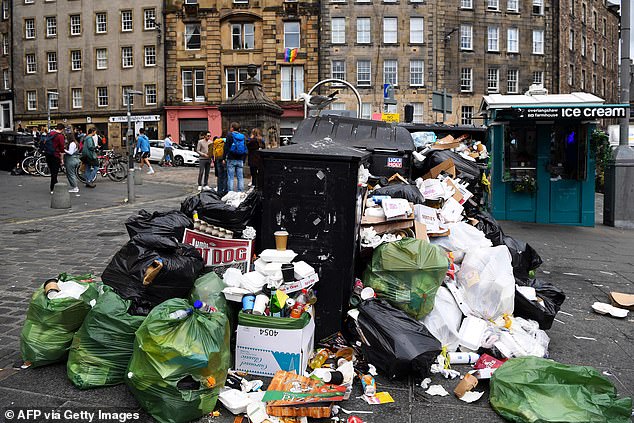 The rubbish piled high in Edinburgh has been an ‘international embarrassment’ as the city hosts the annual Fringe Festival. Pictured: A bin in Edinburgh yesterday 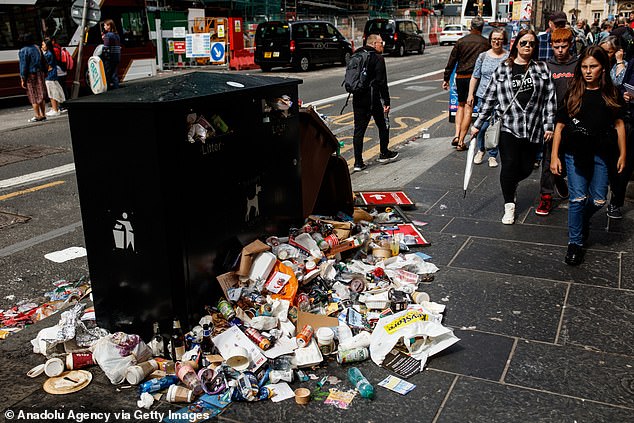 Unite said that, for more than half of council workers, Cosla’s offer represented a rise of between £900 to £1,250, which would see the the lowest paid council staff’s salaries rise to £10.50 an hour

Trade unions were offered a 5% pay rise by Cosla, the body representing local government, but Unite described this as an ‘insulting’ amount in the face of the cost of living crisis.

Unite said that, for more than half of council workers, Cosla’s offer represented a rise of between £900 to £1,250, which would see the the lowest paid council staff’s salaries rise to £10.50 an hour.

This is despite council workers in England being offered a £1,925 flat rate pay offer.

First Minister Nicola Sturgeon responded yesterday that Holyrood did not have a ‘bottomless pit of money’ and insisted she wanted to ‘see the fairest possible pay deal delivered to public sector workers in very difficult times’.

However the Unions have accused the SNP of cutting councils ‘harder and faster’ than the Conservatives during years of austerity.

Conservative local government spokesman Miles Briggs said: ‘The SNP have been underfunding local councils and stripping money from essential services since they came to power, yet they have the brass neck to try and dodge responsibility for this shambles.

‘In the middle of summer, with the Edinburgh Festival in full swing and tourists visiting all corners of the country, the SNP’s inaction and deflection risks embarrassing us on an international scale.

‘The Nationalists must urgently intervene to resolve these strikes and finally commit to the fair funding for local councils we have been calling for, for years.’

Unite members will escalate the strike across the country until August 31, and will be joined by Unison and GMB union members from August 26 to 29, and September 7 to 10.

Wendy Dunsmore, Unite’s industrial officer, said the ‘dispute will continue to escalate to a point where it could now go beyond the winter, causing months of massive nationwide disruption’.

She said: ‘It’s a sad indictment that council workers in Scotland are being offered substantially less than their counterparts in England. 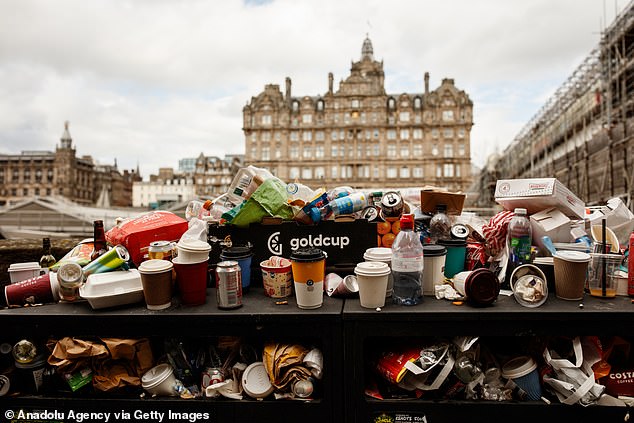 Unions have accused the SNP of cutting council’s budget ‘harder and faster’ than the Conservatives during years of austerity, and some refuse collectors can’t even afford to go to work 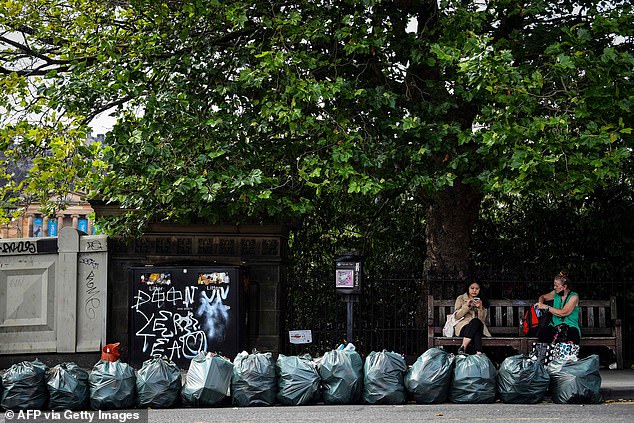 ‘The cold hard reality is that inflation and energy costs are soaring – and they are predicted to rise even higher.’

Unite’s Eddie Cassidy, said that due to SNP’s local council cuts, some refuse workers can’t even afford to go to work.

He said: ‘The Scottish Government, over the past decade, have decided to cut the terms and conditions of local authority workers deeper and faster than the Tories did.

‘They hoped members in local government would just go along with that again, as they have in the last ten years, but they’re in a place now where they can’t even afford to go to work. It’s disgraceful.’

He said Unite was seeking an offer ‘at least as comparable with the one Boris Johnson has offered in England’ – a flat-rate pay rise of £1,925 for all council staff.

Ms Sturgeon said the ‘Scottish Government has a finite budget’ and has already given councils £140 million ‘to help fund a fair pay deal’.

In the Scottish capital, which has seen its streets strewn with litter and bins overflowing, council leader Cammy Day said he was ‘disappointed’ a deal was not reached.

‘This is a national crisis playing out in Edinburgh’s streets during our busiest and most important time of the year,’ he said. 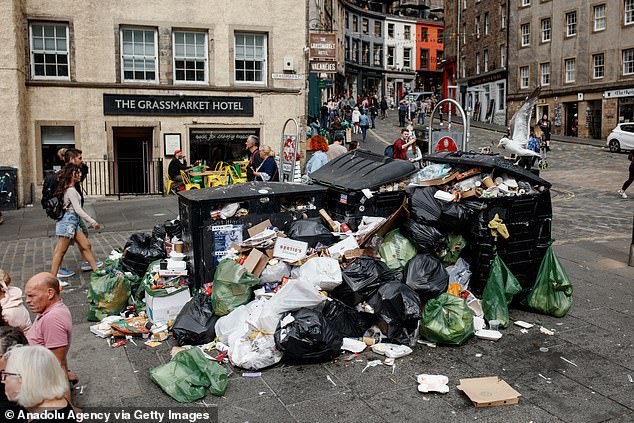 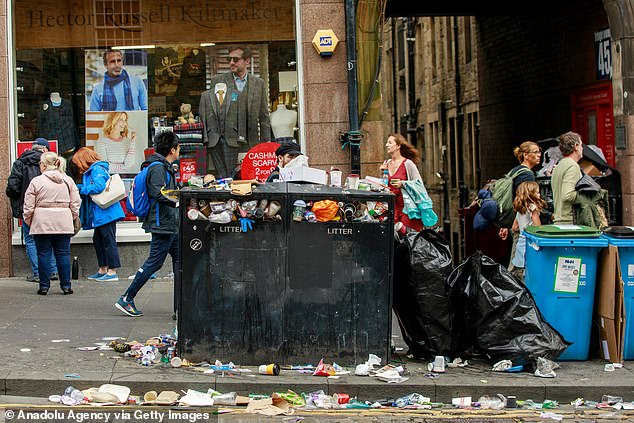 ‘And while this clearly shows the value of our waste teams’ work, it also demonstrates a national failure to find an acceptable resolution.’

Meanwhile, Keir Greenaway, GMB Scotland’s senior organiser, said Cosla would have to do ‘so much better’ when they meet again on Friday, and warned that if concerns were not addressed, ‘strikes will continue, and they will grow’.

‘Our members are angry about the lack of value being shown to them by political leaders and scared about the prospect of pay that doesn’t confront a cost-of-living crisis that’s getting worse by the week,’ he said.

Elsewhere, as part of the union’s pay dispute with Cosla, school and nursery staff in nine council areas are set to go on strike next month.

Unison and GMB said their members will walk out between September 6 and 8, a move that will see schools, early years centres and nurseries disrupted in Aberdeenshire, East Renfrewshire, Glasgow City, Inverclyde, Orkney, North Lanarkshire, South Lanarkshire and Stirling.