EU leaders congratulated Liz Truss on her Conservative leadership victory last night, but Brussels warned it will not back down in the Brexit row over trade in Northern Ireland.

Speaking in Paris, French president Emmanuel Macron said: ‘We are ready to work together as allies and friends.’

His comments may be seen as a thinly veiled jibe at Miss Truss after she told a hustings meeting of Tory activists last month that ‘the jury was out’ on whether Mr Macron was a friend or foe to the United Kingdom. German chancellor Olaf Scholz told the outgoing foreign secretary that he was ‘looking forward to our cooperation in these challenging times.’

But European Commission president Ursula von der Leyen said the EU had no plans to offer her any compromises on the long-running Brexit spat over Northern Ireland.

‘I look forward to a constructive relationship, in full respect of our agreements,’ the former German defence minister said. The incoming prime minister, who will take up her position later today, has vowed to revamp the hated Northern Ireland protocol agreed with the bloc in 2019. 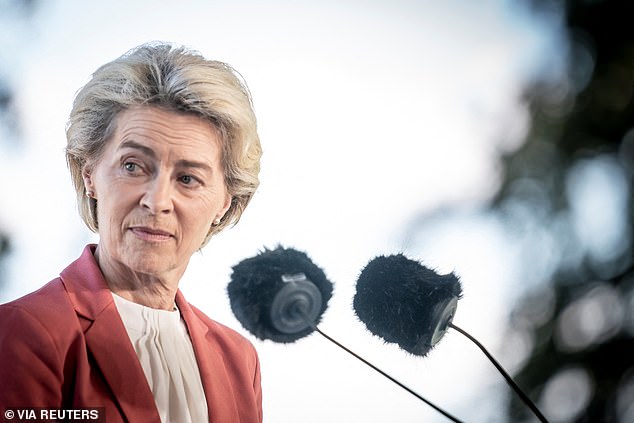 It has left Ulster behind in the EU’s single market, at the mercy of red tape from Brussels and angering unionists who argue it is undermining Northern Ireland’s place in the UK. The leaders of Poland and the three Baltic states – Lithuania, Latvia and Estonia – lavished praise on Miss Truss for her role as foreign secretary in leading the West’s response to Russia’s invasion.

Polish prime minister Mateusz Morawiecki said her arrival in Downing Street would see a continuation of Britain’s policy of ‘supporting Ukraine in its fight for independence, freedom, sovereignty and for our European values’.

‘I wouldn’t like to say that things can change for the worse, because it’s hard to imagine anything worse,’ he said before the announcement of Miss Truss’s victory.

‘But unfortunately, this cannot be ruled out, given that the contenders for the post of British prime minister competed with each other in anti-Russian rhetoric.’