Sources have told The Age that Abdulrahim was shot leaving a funeral, before driving himself to Fawkner police station where an ambulance was called.

He was taken to the Royal Melbourne Hospital where he remains in a critical condition.

A black Mercedes G-Class four-wheel-drive with bullet holes in the front driver’s side window, is surrounded with police tape outside the police station. 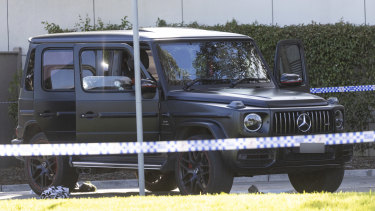 Ambulance Victoria said paramedics were called to an incident at Hadfield about 12pm.

“Paramedics treated one person at the scene who has been taken to hospital in a critical condition,” Ambulance Victoria said in a statement.

A crime scene has been set up outside the Fawkner police station on Sydney Road in Hadfield, 15 kilometres north of the Melbourne CBD.

Detectives are also scouring the corner of Box Forest Road and Sydney Road in Hadfield, less than 2 kilometres north of the police station.

The police helicopter has also been deployed.